Gracia, a Novice from Congo, tells us the events lived with the community of the Novitiate during the Mennaisian 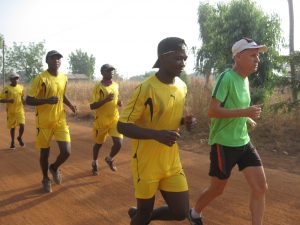 “What makes us happy today, is nothing else than the experience of Jesus we do every day through the community life and through the contacts of the children during the sessions of catechism.

The Mennaisian week was marked at the Novitiate by teachings centred on Father de la Mennais’ life and on the history of the Congregation. These times of teachings helped us a lot, to know the Mennaisian spirituality.

On 26th November, in the morning, we made the traditional Mennaisian race: 15 km of running around the city of Dapaong. Five runners – four Novices and their Master, Bro Jean, accompanied by two cyclists – Bros. Philippe and Gilbert. The course was completed in one hour and a half. Songs of the Mennaisian week gave rhythm to the race. This race was offered for the glorification and the beatification of our Venerable Father Founder. 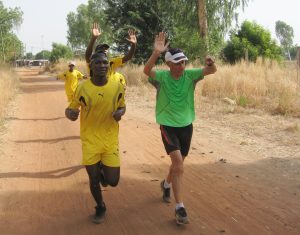 After this Mennaisian race, the community of the Novitiate welcomed the Brothers from Ogaro and Mango, plus the pre-Postulants from Ogaro for a beautiful Eucharistic celebration presided over by the parish priest, Father Soler accompanied by the Chancellor of the diocese, Father Gilbert Lébine. A very fraternal meal followed this celebration. This day closed with the prayer of the Vespers in the presence of the FIC aspirants from Dapaong, followed by a meal.

Animated by the love by which they love one  another as brothers, Jean-Marie’s sons are joyful being together.
We ask you increasingly Lord, so that the holiness of our Father Founder may soon be recognised and proclaimed Blessed by the Church. ”