As every year, about twenty brothers (of above 35 years old) meet around a team of formators, to live an international session of formation, of personal renewal, following in footsteps of the Founders. 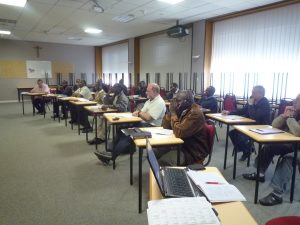 Brothers coming from Uganda, Kenya, Tanzania, Togo, Spain, France and Italy, arrived at the Mother House of the Brothers at Ploërmel on July 13th 2017. A priest, Father Franck Kaninda, a Congolese (Congo RDC), studying in Rome, from the community of the Fathers of Picpus (neighbours of our Generalate) accompanies and shares in a brotherly way the life of our group. 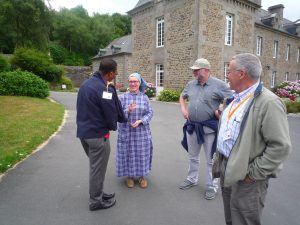 Farewell moment at the monastery after 3 days of retreat

The rhythm of the session is the following: two days at the Mother House to live times of interiority, times to deepen the mennaisian spirituality, times of personal and community discernment. And one day of pilgrimage in the steps of our founders (St Malo, Dinan, Chesnaie, St Brieuc, Guingamp, Auray, Josselin, Malestroit and Paris where the session will end on August 14th). 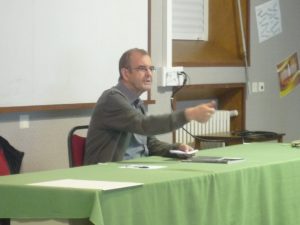 Brother Yannick, Superior General, during his stay at Ploërmel, has talked to the Brothers of the session

And to go into the heart and join Christ in their life, in their vocation, the group lived 3 days of retreat at the Monastery of Beaufort (Plerguer, Ille-et-Vilaine). The magnificent place – a real cathedral of greenery – and especially a beautiful liturgy animated by the community of the Dominican Sisters greatly helped the Brothers to appropriate the objective of the session: revitalize love for the Christ and for their vocation.