Something new! The beginning of a School year is an opportunity to announce new things. This is the case for the Tutelle Team that accompanies the Schools of the La Mennais France Network. From Vannes, the 7 delegates and those in charge of a mission are now based at the Mother House. The dynamic is focused on the “common mission, carried out by all at the service of the Schools”. In focus, 400 young people are expected on 27 November for the closing of the Bicentenary. Overview.

“This is a special start and we want to be attentive to the welcome and the closeness, with attention to the people in charge, who start in unprecedented  conditions, given the health realities.” 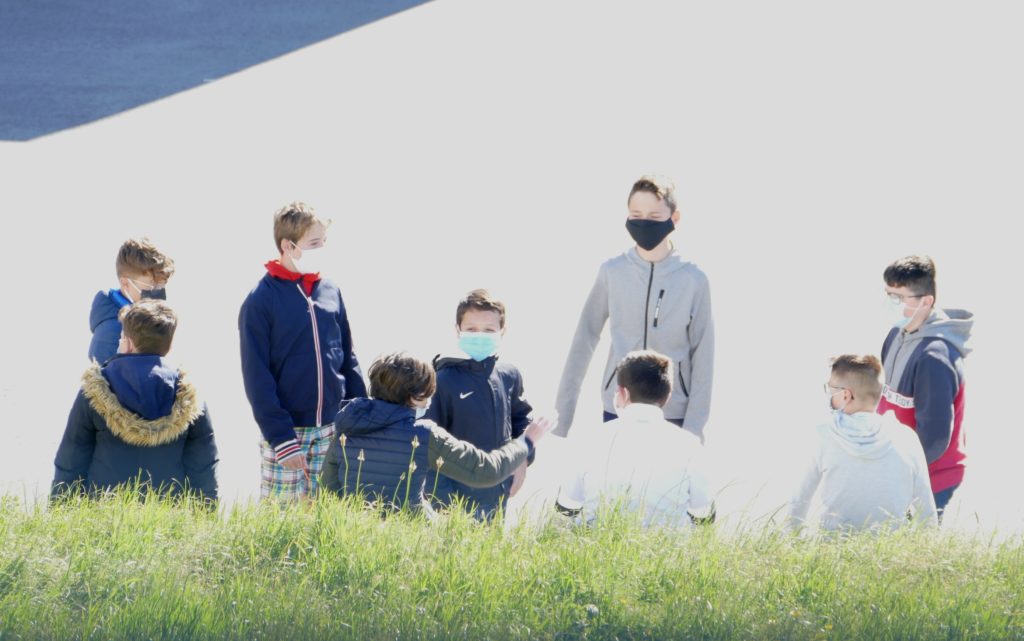 A special start given the health realities.

The emphasis is given: it is a matter of joining forces, for a «Tutelle supported by all»: team of delegates, those in charge of missions, directors, management teams, pastoral assistants, teachers, staff. The Tutelle? It is a «common mission»: a care and an impetus to create the conditions for the proper functioning of the schools as well as organisational issues, planning, material realities and management, or on relationships and human resources and projects of educational communities in a Mennaisian spirit.

After the consultation of the Directors last year and the work of the Brothers and Laity at the last Assembly, the Reference Text of the Network was released a few months ago. It is now a matter of making it live and implementing it. Eight themes were defined: to educate, to live fraternity, to propose the Gospel, to develop the best of oneself, to welcome frailties, to discover the religious and spiritual dimension, to educate oneself, to build with diversity.

«The mission of the Brothers continues actively in these realities of accompanying institutions, it continues with this Team», assured Bro Yannick Houssay, Provincial and responsible for the  Tutelle. “We want to be consistent and apply what is proposed to ourselves,” said Ronan Petton, General Secretary of the Tutelle Team. “ If we are truly a team, we are translating it concretely this year into a common working space – an open space.” And symbolically this space is now set up at the Mother House «as one who comes to drink at the source». This office of the Tutelle is located  in room Argoat, in the Reception Building at the end of the corridor of the Administrative Services of the Province. 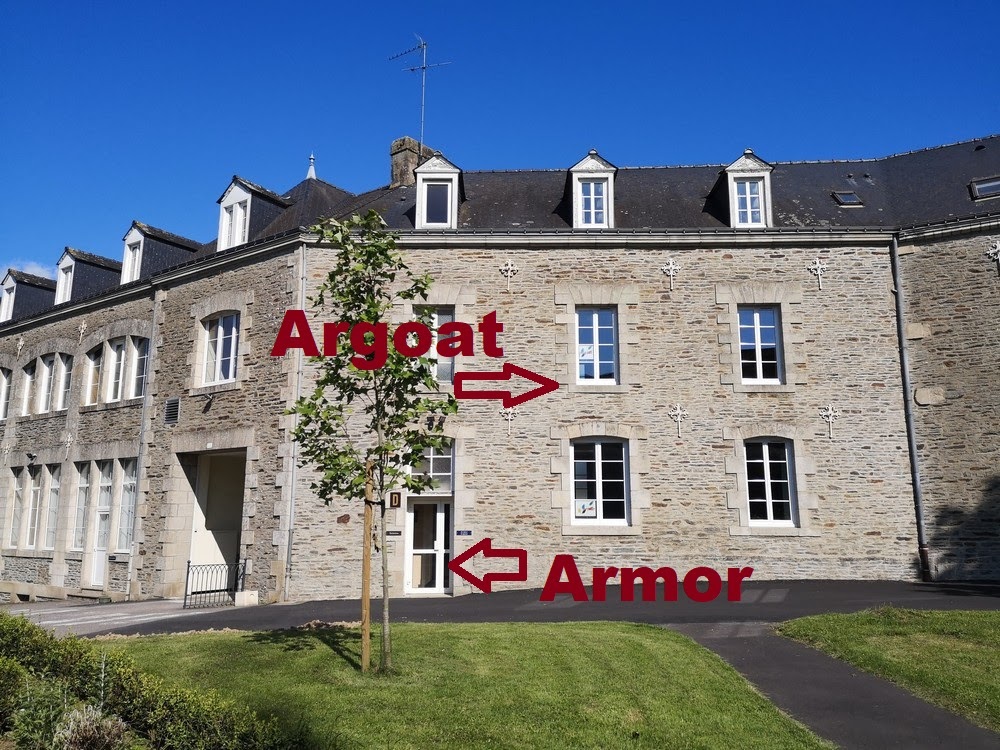 The offices are located on the 1st floor of the Administrative Building of the Mother House. 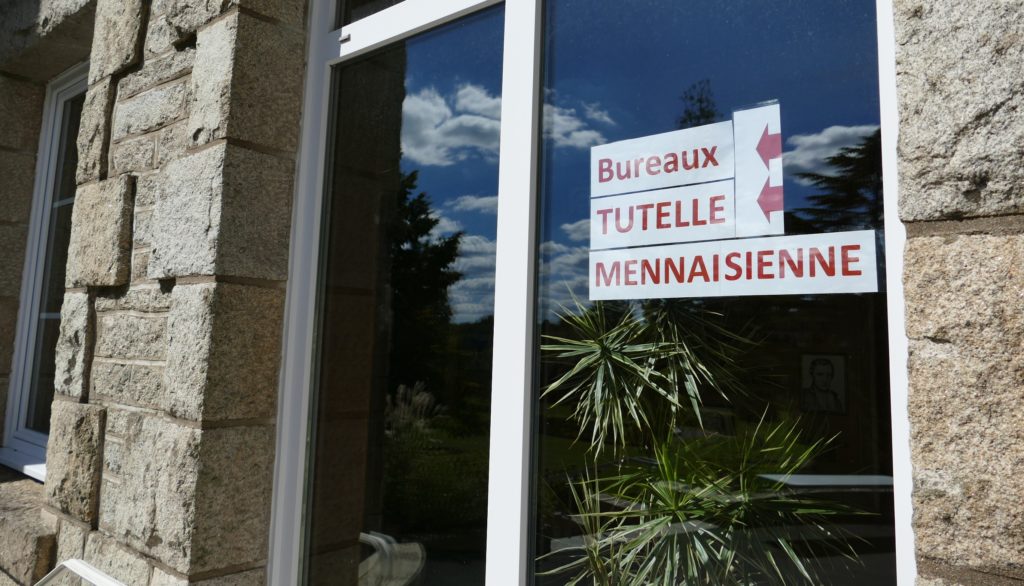 The pastoral animation team also disappears. This responsibility is now carried out by the 7 members of the team, including Bernadette Petton, who is responsible for this task. Commissions will be set up for primary, secondary and high schools. The same goes for school life: the team shares the responsibility. The follow-up was done last year by François Péron. The latter pursues his mission for La Mennais Jeunesse and is now also involved in the service of the La Mennais Foundation. 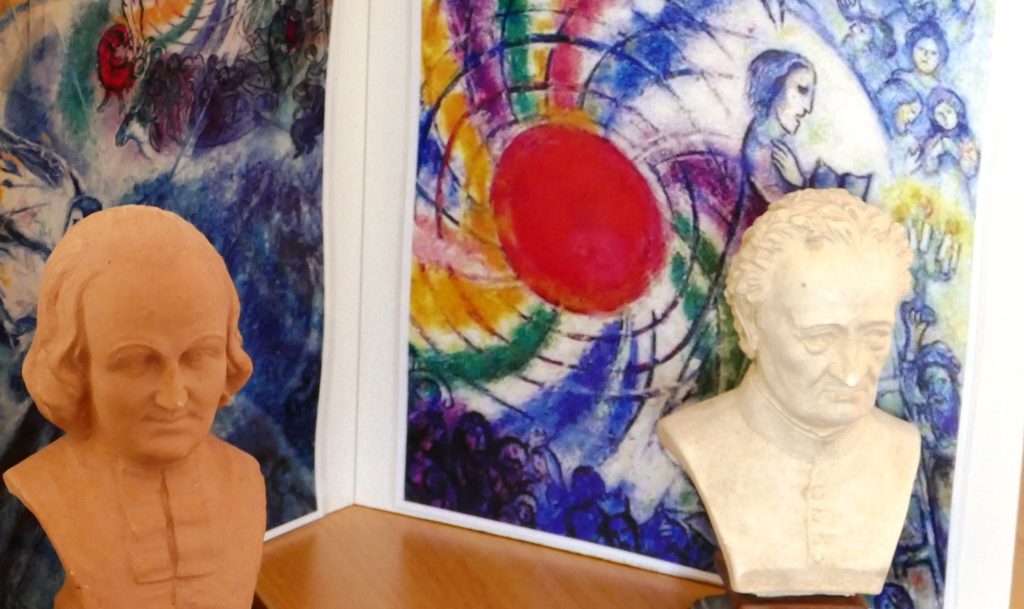 Present in the office: the busts of Gabriel Deshayes and Jean-Marie de la Mennais, co-Founders of the Brothers. 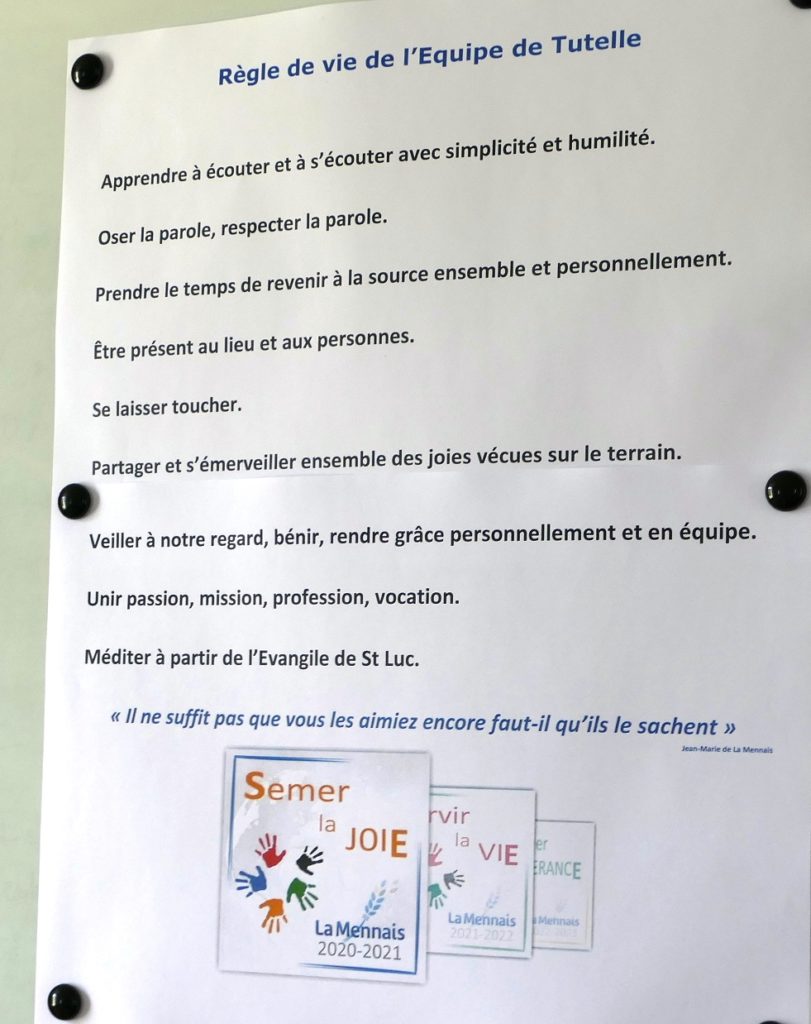 The “Rule of life” defined by the Tutelle Team for its own functioning.

This work, which wants to focus on collective intelligence, also aims to seek new formators within the Network or outside and to strengthen the links with various actors: the gestion association members -Ogec – but also the Mennaisian Solidarity Association Assific, the Estival Association, etc. International links with other Mennaisian countries will also be encouraged.

Another novelty is that new Head Teachers in the Network – less than a dozen – have a “sponsor” – himself a Head Teacher – who will accompany them.

Two dates are also in focus: 400 young people from Primary to Higher Education are expected at Ploërmel on 27 November to mark the Bicentenary of the foundation of the Congregation of the Brothers. Each institution will be represented by a team of 5 young people. Workshops, meetings, testimonies, songs are on the programme. Previously, the Head Teachers will meet on October 19 and 20 at the Mother House as well.

35,000 young people. While the figures of the new school year are being recorded, last year La Mennaisian France Network welcomed nearly 35,000 children and young people in 76 schools for a total of 2,630 teachers and 1,061 non -teaching members of staff.

Major projects. To be noted among the major projects underway in schools: the opening of the first level of  Lycée on the site of St Joseph Secondary school in Savenay (44) in view of the opening on a new specific site of the new Lycée in the beginning of 2022, the redevelopment of St Jean-Ste Thérèse school in Rennes (35) – classes and catering – and the construction of the cafeteria at the Lycée La Mennais in Ploërmel (56).