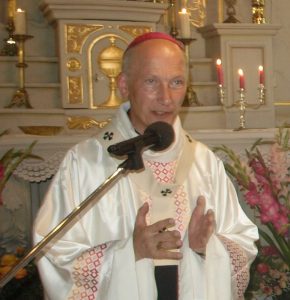 At the end of the blessing of the stained-glass window of Brother Cyprien – 1st Superior General of the Congregation and successor of Father de la Mennais – in the “Chapelle des Domaines” of Maure de Bretagne, France, on August 15th of this year, Msgr. Pierre d’ Ornellas -Archbishop of Rennes, Dol and St-Malo- granted a special interview to La Mennais Magazine. He shares here alternately his view on John Mary de la Mennais, on the Brothers and their mission today. He also makes an appeal to the Brothers and the lay persons of the Mennaisian Family to set up “Patros”. At the beginning of the new school year in many countries, he also sends a message to children and to young people, to educators and to teachers. Stimulating words which invite to launch out into the deep.

Give the taste. ” To the extent that God has enough genius to allow every child to become a child of God, also the Brothers and the lay persons committed with them live a priori confidence carried towards every young person. Christian faith allows seeing with joy every young person and his talents. It is the confidence in the young person which arouses service and selflessness for his growth. The educator gives the taste to others, as the Brother of the school in Maure de Bretagne gave it to the young man Pierre Chevreau who became then Brother Cyprien who, from his childhood, came to pray in the “Chapelle des Domaines”.

So much need of Brothers for today. “Today, we particularly need Brothers involved in Education. It is so important that men may be consecrated to God for the work of education. Nobody can live without education. Every baby coming into the world is handed over to the educational act which he receives. A mom who looks at her child and gives him to eat realizes an act of love which educates. Then we understand that God calls men and women to this educational task, especially as the situations of many families are fragile. The crisis of the vocations, in particular vocations of brothers, results from a crisis of faith, from a crisis of listening of God. Besides, there is a strong move that education be taken care of by the public corporation, but nothing will replace the presence of those who dedicate themselves to God for educational work. The consecration to God has an infinite price. It is a sign of the value of education among which married men and women make their job today. ” 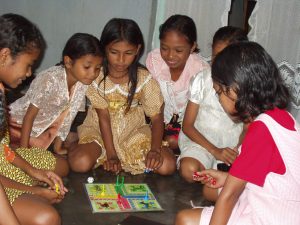 It would be an educational proposal in which joy and faith, sports adventure and solidarity action.

“By thinking about the current educational needs, I wish to make a suggestion to the Brothers and the laymen of the Mennaisian Family. Why could not the charisma of John-Mary de la Mennais and that of Don Bosco merge? Why not to set up foundations outside schools in themselves or in connection with the school? Both charismas complement each other. Educational works overtakes the work in schools. Many catholic schools in Brittany were established by the Brothers, but the frame of the school is not enough any longer today for education. Of course schools are necessary, but let us think of the emergence of “patros” today where children and young people will find something else. It would be an educational proposal in which joy and faith can get married, as well as sports adventure and solidarity action for the poorest, personal growth and responsibility of others, etc. ”

Docile to the Spirit and not to the habits!

” If such or such Brother or lay persons feel in themselves a call to promote a “patro”, I do not believe that it is against the spirit of the foundation. I invite them to think about it by being docile to the Holy Spirit and not to the habits! Let us pay attention to what is new that He makes appear. ”

On the path of the school.

“At this time of a new start of school year, I think of the children and the young people, the educators and the teachers who take back the path of the school. A new school year is to be received as a gift which God makes to each to grow up on the path of holiness! ”

Special Message to children and educators 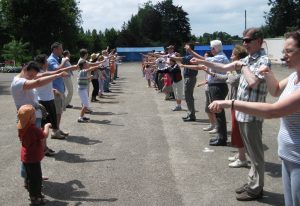 To every child and to every young person.

“I invite every child and every young person to spare no effort and to surpass himself in projects which invite in the self-sacrifice and in the discovery of interiority. I want to tell each: do not rush on screens, and what projects have you got for the others? Interiority also means enthusiasm in the gift of yourself. Do not forget to pray every day by making the sign of the Cross, it is the most beautiful prayer! Try to accompany with joy those who, around you, ask for the Baptism. Do not hesitate to witness to Jesus with your companions. Jesus is the best friend of all. He lived the gift of himself to the others. It does not occur “by the sofa, but by the fact of putting on shoes ” as has just said Pope Francis at the last WYD(WORLD YOUTH DAYS). Jesus tells you: “Let my joy be in you! ” There is so much joy in the self-sacrifice! ”

To every educator and teacher.

” If you are a Christian, do not forget to pray the Holy Spirit. It is he who allows to discern what is beautiful, what is good, what is right, what is holy in a young person and that’s what it is necessary to make increase. It allows to respect the freedom of the young person. It is necessary to accept that a young person is more intelligent than the educator, even if it is a practical intelligence which could disappoint the educator dreaming about a learned intelligence. Simone Weil – the philosopher – Liked saying: ” There is genius in every being. ” The good educator knows how to discover this genius. Do not hesitate to speak about God, the young people are thirsty of witnesses, they need more than ever marks in the religious field. It is beautiful to see an educator daring to say: ” I believe in God and in his love for each of us. ”