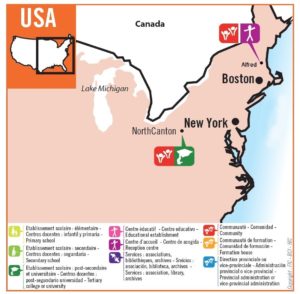 In 1903, the arrival in Canada of about100 Novices and young Brothers from France caused serious difficulties of integration into the young Province of Quebec. The Superiors rejoiced when they found a house near the border at Plattsburg, USA. About 20 Brothers emigrated there and attended English classes at the University. It was the starting of The FIC’s presence in the United States.

The American communities were constituted into Provinces only in 1946, when the Canadian region was divided into 5 independent Provinces.

Fall River (Massachusetts), opened in 1927 was completely destroyed by a fire in 1968. Later on, the Brothers offered their services to the near-by College run by the Jesuit Fathers. Waterville (Maine) started in 1928. Biddeford (Maine) lasted from 1929 to 1970. 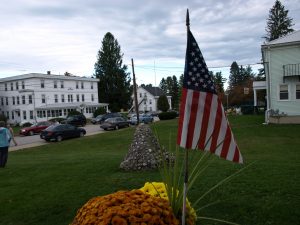 Alfred (Maine) bought in 1931 from the Shakers became the main house and the Formation Centre for the Province there. Louisville (Ohio) opened in 1964 and closed down in 1976. The Catholic high school in Detroit (Michigan) was run by the Brothers from 1956 to 1970.

To be noted: a temporarily commitment at Knom, in Alaska, where two Brothers worked at a Radio Station for some years.

Canton (Ohio). In 1951, the Provincial set up La Mennais College at Alfred (Maine) and transferred it to Canton, Ohio, in 1960 under the patronage of Bishop Walsh.  In 1995, the College grows into a University. Walsh University is now a dynamic private university run by lay people, and the small international community of brothers living on campus contributes greatly to its Mennaisian Catholic identity.

Today, the majority of the brothers reside in Alfred, ME, which remains the Mother House of the United States and which houses the York County Shelter, a host organization for people who are homeless and/or have different addictions.

Since July 2016, Notre Dame has merged with the Jean de la Mennais Province of Canada-Mexico to form a single entity in North America.