What’s new in recent months for La Mennais Schools and Communities in JAPAN, PHILIPPINES and INDONESIA? If the functioning of the Schools was affected by the health crisis, the training of the young Brothers continuds actively and the foundation of a new Community is being prepared in Kupang, Indonesia. Overview with Bro Gildas Prigent, Brother Visitor of St Francis Xavier District.

No Community in Asia, both for the Brothers and the young people in Formation, has so far been affected by Covid19, explained Bro Gildas Prigent, Brother Visitor. All Countries are aware of restrictive measures to limit the epidemic: barrier measures, curfew, local confinement, quarantine, etc. Travel restrictions are strong both outside and inside. This paralised a District like ours where the Communities are dispersed and separated from each other! Compared to other Continents such as Europe, the Covid-19 crisis in our three Asian Countries is limited in both global contaminations and deaths. Official figures indicate that the pandemic is still present but not in proportion to what is happening in other Countries such as France.

The District’s Formation Houses continued to function as normally as possible, says Bro Gildas. Of course the Inter-Novitiate and Inter-Postulate activities are done only on-line and the sessions and internships -apostolic experiences- that young people do in the Formation Curriculum have been suspended. “Relaxation” and “Discovery” outings were also significantly reduced or stopped.

The Scholastic Brothers of Manila continued their Theological Formation by following their Courses on the Internet. Fortunately they could receive some teaching and practice sport at MAPAC (the training center of the Marist Brothers) with the young Marist Brothers. These activities that allow contacts and relationships were truly beneficial in a context of isolation that has been going on for months! 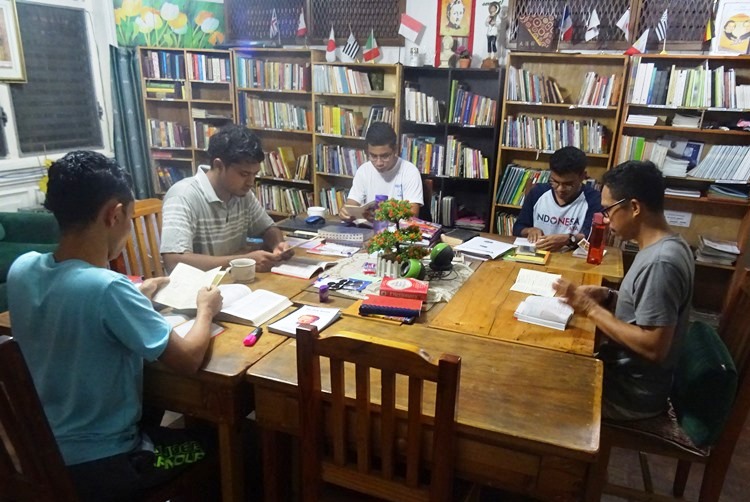 Our 4 Brother students from Yogyakarta and Manila. Since the beginning of the crisis last March, all the activities of the Jesuit University of Yogyakarta have been on-line only. The situation is identical for Bro Mamerto, a Theology student in Manila. In these Catholic Institutions the Formation is serious: the Courses are given regularly, the Examinations are all done on the Internet. In terms of content, our Brother students lost nothing!

Brothers in formation at the community of Yogyakarta.

However, as with all students over the world, University education is not limited to Courses! There are also all the campus activities, interpersonal relationships, direct contact with teachers, etc. Their academic experience as a result of the restrictions imposed was therefore truncated and impoverished. But as members of a Religious Community they enjoyed living, working and working conditions that are far more joyful than many of their fellow students!

The school has been living under the Covid19 regime since July 2020 School year. The school has experienced several types of restrictions over the past few months. After a short period of «face-to-face» reopening, the school has been closed again for a few weeks following the decisions of the authorities of the NTT Province. 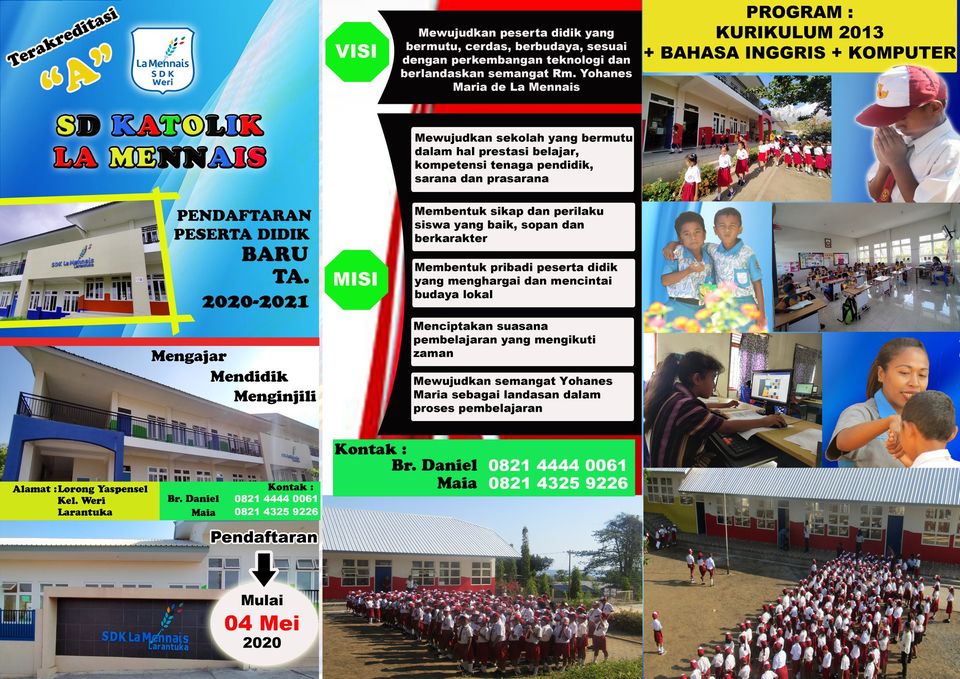 Teaching is done more in families by grouping students in small groups. This is to try to maintain a minimum of activities and follow-up of children. In Primary school, it is not possible to think continuous teaching by Internet, especially since not all families have computer equipment or connection.

The extensions of this situation over more than half of the school year 2020-21 are already known for the SDK La Mennais: drop in enrolment, drop in the educational level of children and financial difficulties that accumulated for the School, Parents who are unable or unwilling to pay.

The Primary and Secondary School were opened since the staggering start of the School year last October (instead of June usually), but all students remained at home. Teaching could be done remotely either via the Internet – but students often  have their smartphone and if there is a sufficient Internet connection – or by distributing printed materials directly to students. 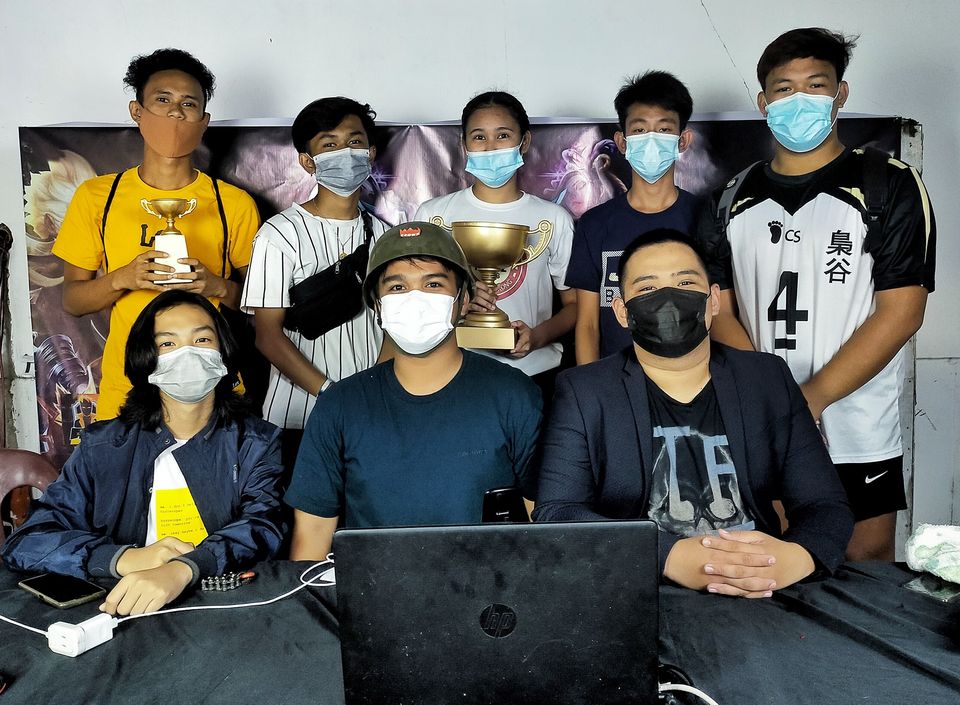 This implied a significant logistics for the printing and distribution or collection of the given assignments. Here too, as the school is private, families are finding it increasingly difficult to pay due to lack of employment and the number of students enrolled has reduced. 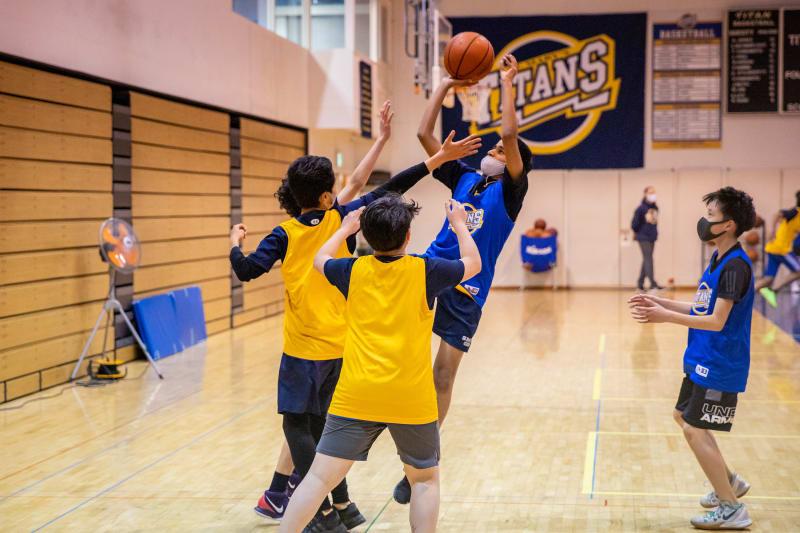 Many of these students, especially from the United States, were unable to return to Japan after the borders were closed! So the numbers have gone down dramatically, and the financial consequences are immediate.

Perspectives and projects for the Asian District SFX

Within a few weeks, the District’s assignments and changes will be announced. The novelty will be the start-up of the new Community of 3 Brothers in KUPANG, Indonesia, which is scheduled to start at the end of June 2021.

Indonesia continues its slow growth with 3 communities of a total of 13 Brothers! We also hope, despite the impossibility of Pastoral vocations, to have Postulants and Novices for the year 2020-21. Within a few months, the District could also look forward to having one 1st profession and 3 for Perpetual profession.”