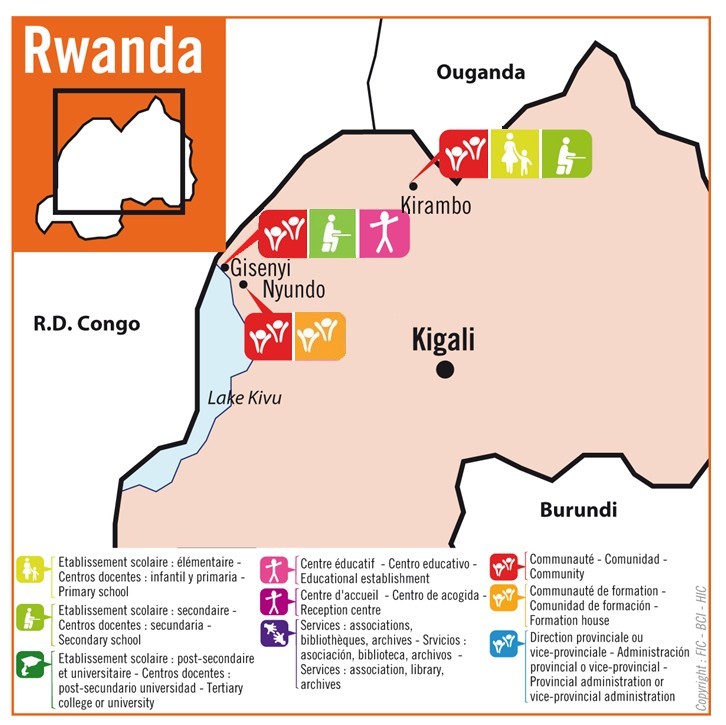 Since 1968, some Canadian Brothers arrived in Rwanda and started studying the local language. 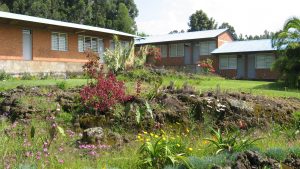 At GISENYI The Brothers took charge of the Inyemeramihigo College, a Technical, Agricultural and Domestic Science Centre.

In 1975 the Brothers settled at RAMBURA. The present College has mainly an agricultural bias. But, in 1983, completely rebuilt, the institution changes completely and becomes a Technical Secondary School providing 4 choices: Literature, Mathematics, Biochemistry and a regular Technical Department. In 1992, the College being in full expansion, the Brothers were requested to leave, and the management of the College became the Parish priest’s responsibility. Then they took over the management of KIRAMBO where they opened a Secondary School.

In 1981 the Novitiate, which began at Rambura in 1975, was transferred to Nyundo. The same year the Brothers arrived at BUTAMWA. In this locality, Bro François Cardinal is the kingpin of a Centre of a Rural Training. On November 29th, 1992, he was murdered.

In 1994 The assassination of the President, General Habyarimana, was the starting point of the systematic massacre. The country tries hard to recover gradually from this drama.

After a temporary withdrawal, the Canadian Brothers, as well as the surviving Rwandan Brothers, came back to Kirambo and Gisenyi. They started restoring the community buildings of Nyundo and Gisenyi. The Teacher’s Training College at Kirambo, rebuilt and enlarged with government money, has today the status of a mixed Co-Ed Teacher Training College.

The community of Nyundo welcomes new Rwandan pre-applicants and aspirants.

In 2018, a new Primary school was opened near the community : “Our Lady of the Apostles”. 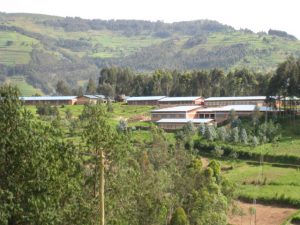 In 2002, at Gisenyi, Bro. Gabriel LAUZON founded, in association with Abbot Épimaque MAKUZA, who was responsible of the Parish Stella Maris of Gisenyi, the association « Vision Jeunesse Nouvelle ». This organization works in close collaboration with the diocese, the institutions of the State and other various bodies. The association aims to be particularly at the service of the out -of- school youth, specially the children and the most deprived, the needy and sometimes the marginalized (the Pygmies, the deaf and dumb persons, and the orphans), without neglecting of course the schooled youth. The general objective is to fight among the young people the plague of the AIDS and other IST as well as crime under all its forms. The activities of Vision Jeunesse Nouvelle cater for more than 20 000 young people of 10 to 20 years old, distributed throughout the region. Contact:

In 2015, on a piece of land acquired in the city of Gisenyi, the Brothers built classes and opened a Nursery and Primary school : “Saint John-Paul II School” .