A holy year! This is how the Brothers and the Laity of the Mennaisian Family present in Rwanda live this year. 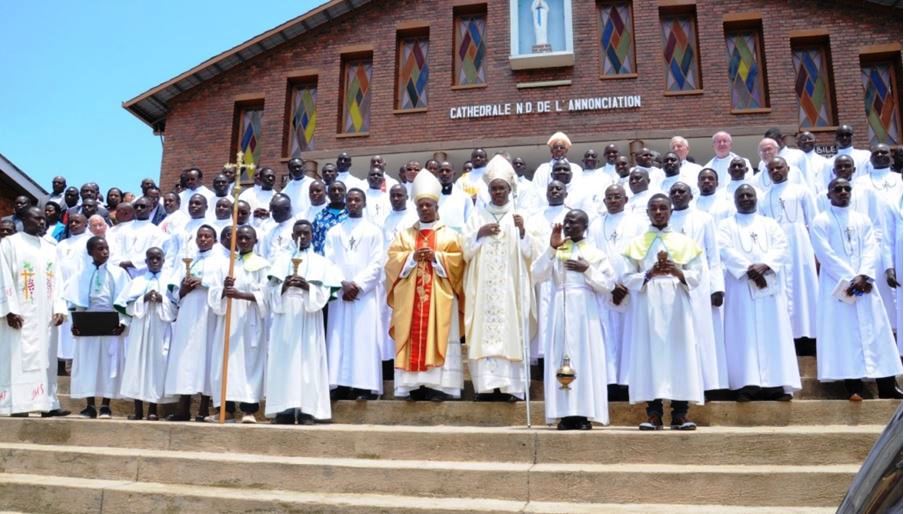 At the heart of the Jubilee: the three bishops, twenty or so priests, forty or so Brothers, the servants of Mass and the administrative authorities.

The highlight was the celebration of this anniversary on September 15, in Nyundo, in the presence of Brother Hervé Zamor, Superior General of the Brothers of Christian Instruction, Mgr. Anaclet MWUMVANEZA, Bishop of the Diocese of NYUNDO, Mgr. Vincent HAROLIMANA, Bishop of the Diocese of RUHENGERI, Brother Mario HOULE, Provincial of the Brothers of Canada-USA-Mexico, School and New Youth Visionaries, many priests, representatives of other congregations and authorities. 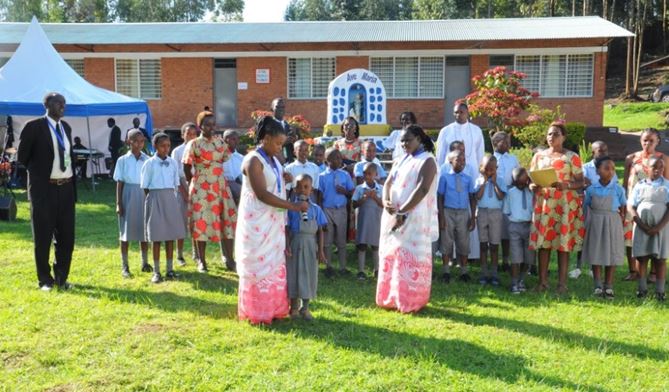 The students of the Saint John Paul II School of Mbugangali with their teachers.

The grand procession of guests lived intensely on this historic day during the celebration at Nyundo Cathedral. The delegation of the Brothers also visited the communities, the schools including the TTC of Kirambo and the Saint John Paul II School of MBUGANGALI where a tree was planted, symbol of this anniversary, while a statue of Jean-Marie de la Mennais was blessed.

“From 1968 to today, 32 Canadian Brothers, about 40 Rwandan Brothers and some Congolese Brothers have dug, watered, pruned so that the Master of the Vine can bless the work of their hands,” recalled Bro. Hervé Zamor, Superior General of the Brothers, in his address. These pioneers have sown in tears, now we reap in joy, we collect beautiful sheaves. 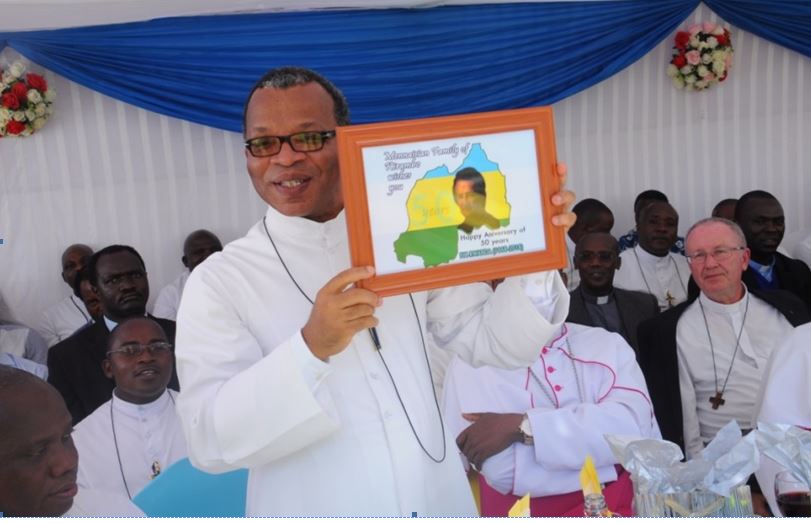 Multicoloured sheaves! This jubilee wants to be a parchment on which is engraved in letters of gold the memory of these humble workers: 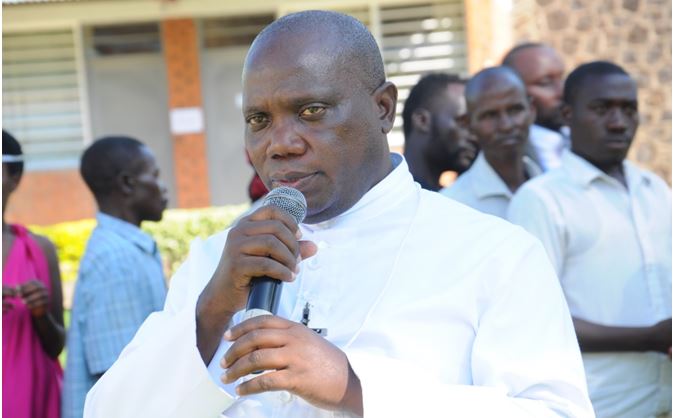 “Tribute to all the Canadian missionary Brothers who work in Rwanda and who have left us such a beautiful legacy,” said Bro. Pascal Mbolingaba, Brother Visitor of the District of St. John Paul II. In 1878 and officially in 1886, the Brothers settled in Canada, from where they came in 1968 to found the mission of Rwanda.

“Rwanda has received the seeds of the Mennaisian charisma and we see that the grain has sprouted and a tree is growing and the fruits are palpable. Over the decades, the Brothers have participated in the development of the country and its evangelization through different foundations: 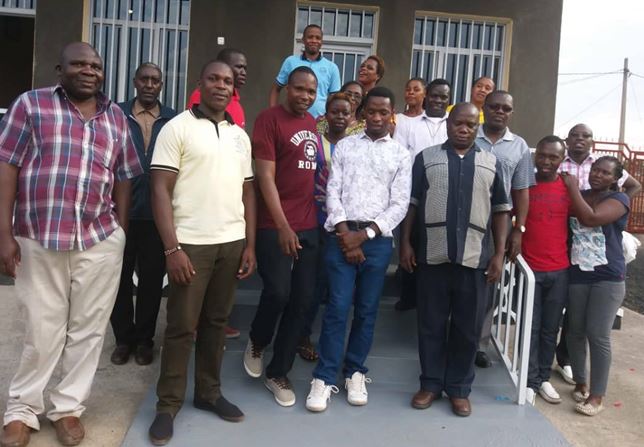 “The challenges are many, we must confront them with audacity and determination. A great job remains to be done, continued Bro. Pascal, Visitor, to consolidate the succession by a better recruitment of the members, the perseverance of the members in spite of the trials of all kinds, to ensure the growth of the works initiated these last years: Vision New Youth, the two schools of St. John Paul II of Mbugangali in Gisenyi and Our Lady of the Apostles in Nyundo. “ 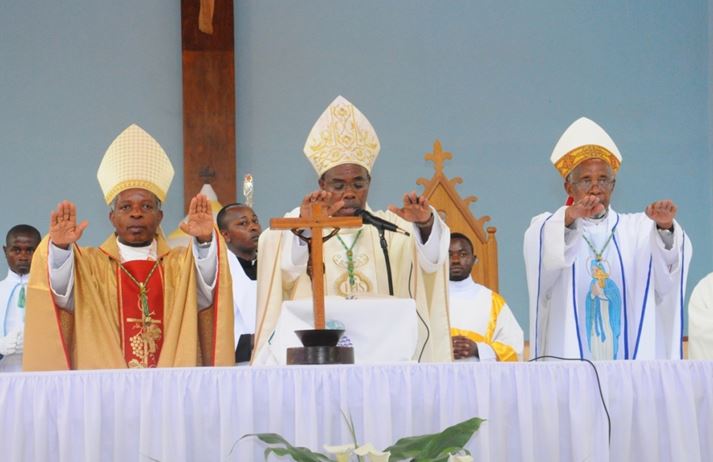 Bishop Vincent HAROLIMANA, Bishop of the Diocese of RUHENGERI, gave his testimony by saying that he was a student of the FIC when he was at the Minor Seminary Saint PIUS X Nyundo. He thanked the Brothers for their work of evangelisation and education in Kirambo (TTC KIRAMBO) which consists in preparing the future teachers of the Primary School and Kindergarten. He emphasised that this school of the Brothers is a Nursery of Vocations: to priestly life, consecrated life and conjugal life. He encourages the Brothers by wishing them to continue to be messengers of peace among young people. 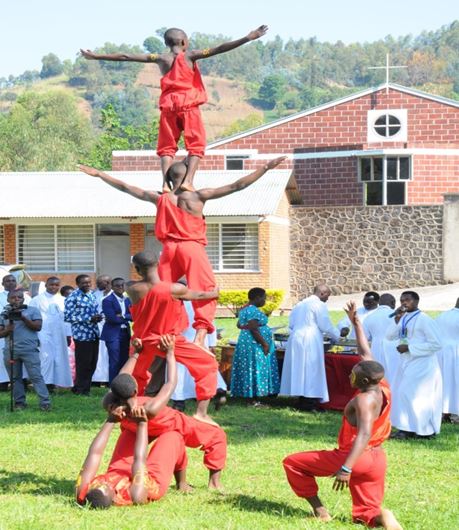 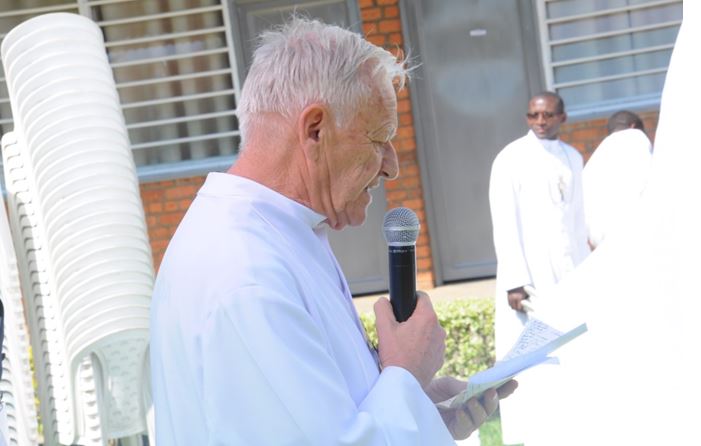 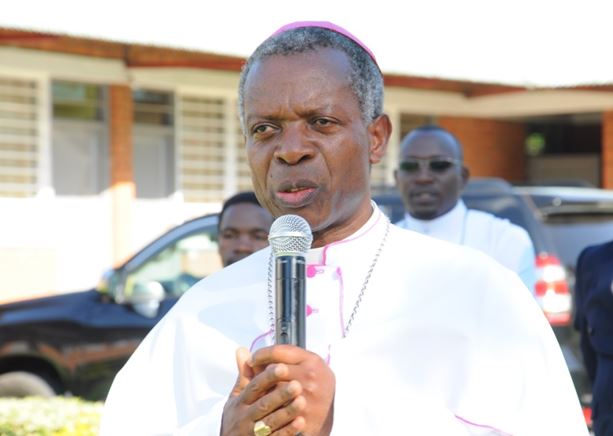 Bishop Vincent HAROLIMANA, Bishop of the Diocese of RUHENGERI. 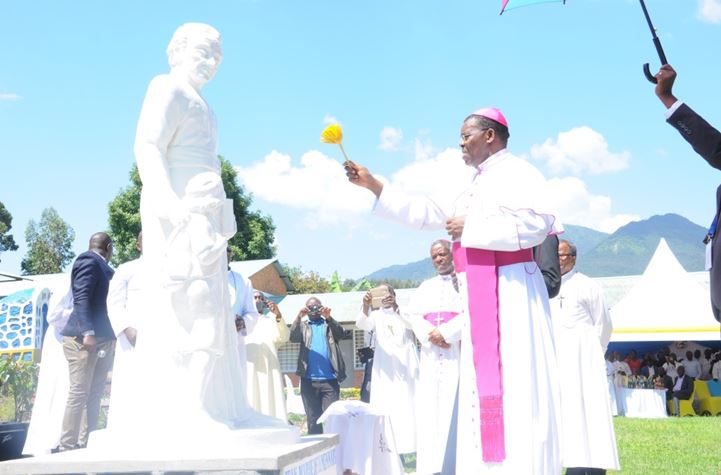 The statue of JM de la Mennais was erected in the courtyard of NYUNDO Postulancy and realised by Mr. MASUMBUKU Jean Pierre.

Bro. Mario Houle, Provincial of USA-Canada and Mexico intervened to testify: “The first Superior of this mission still lives. His name is Bro. Gérard Parisien and he is 98 years old. He is retired to the Infirmary of our Mother House in La Prairie, Canada. And he is a saint, a true saint. I also asked him for his paternal blessing for all those I was going to meet during my stay in Kigali, Kirambo, Gisenyi and Nyundo.

I acknowledge his joy, his charity and his love of the Congregation in each of the 32 Canadian confreres who followed him – three of them are still here: Gabriel, André and Paul-Émile – as well as Uzele, my Congolese colleague. And I recognised Bro. Gérard this week in my young Rwandan colleagues, filled with dynamism, attachment to young people, daring and generosity. ” 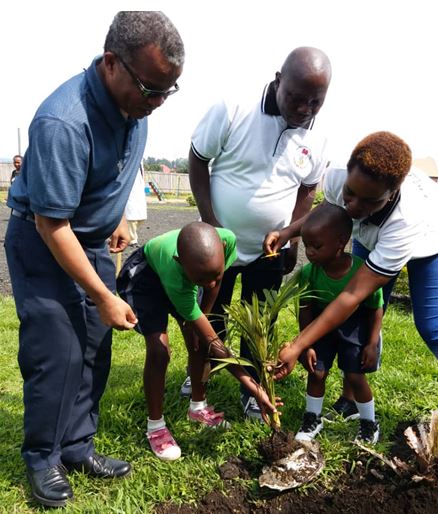 Planting a tree by the Brothers Hervé Zamor and Pascal Mbolingab 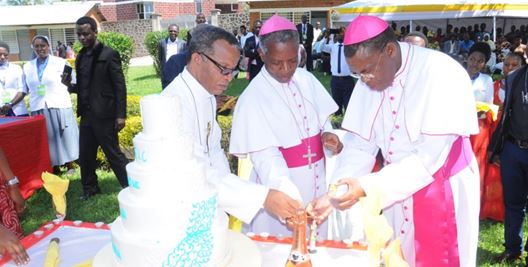 “May this Jubilee be a new beginning, a new spring for our Brothers of Rwanda! ” concluded Brother Superior General.