The Daughters of Providence of Saint-Brieuc

Founded in 1818 by John-Mary de la Mennais, the Congregation works today in France, in Western and Eastern Canada, in England, in Uganda.

Members of an Institute of religious and apostolic life, the Sisters gather because of Jesus Christ and the Gospel; their mission is to make Jesus Christ known and to collaborate to people’s education in all its dimensions : human and spiritual.

By doing so, they remain faithful to the Founder who said to the first Sisters welcoming the youth who were loitering in the streets: “Make them women and Christians”. 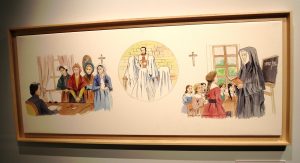 It was in 1818, at St. Brieuc, in Northern Brittany, where, like everywhere else in France, the Revolution had left ruins and worries. A multitude of poor young girls were not receiving any instruction; they were wandering in the city streets. Mr. de la Mennais, who was then the Vicar-capitular of St. Brieuc , an apostle with fiery zeal, wanted to get them out of their ignorance. The Lord had him meet some young women from the city, animated with the same desire to do something to soothe these worries. Marie-Anne Cartel, Fanny Chapelain, Marie Conan, Esther Beauchemin will form the first cell of the future Congregation of Providence. They started gathering some poor children to whom they gave a Christian instruction, and taught them reading, writing, maths and manual work at the same time.

They also gave them food, as the little group often arrived with an empty stomach and “that’s a bad condition when you want to learn”, said Jean-Marie de la Mennais.

These young women had thought for a long time of becoming Sisters, but their family obligations did not allow them to realise their hope of community life. During the Christmas night of 1818, they gathered in the Notre-Dame du Refuge chapel and made in common an act of consecration of themselves to God:

“In the presence of the most Holy Trinity, of our beloved Mother, of Saint Ignatius, our Patron, of our Holy Angels. We declare, with the help of the grace, without which we acknowledge we cannot do anything good, we declare that, from now on, we want to think and say nothing but what stands for the greatest glory of God; we repudiate for the time being and forever any intention of self-love; we want to serve God with all our hearts.

On March 25 1821, they received their Rule from the Founder’s hands, and, on the same day, took their vows. As early as 1820, the accepted children being too numerous, Mr. de la Mennais purchased for them a part of the enclosure of the Ursuline convent. This house, which is still called “la Providence” is located now on rue des Lycéens Martyrs. 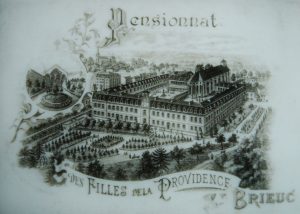 At the beginning, the sole purpose of the new Society was the education of children. But, quite soon, the Founder specified that he did not wish to exclude the other good deeds their zeal might suggest, according to the times and places.

Successively, schools and boarding schools were opened in some cities and villages in Côtes du Nord and Ille et Vilaine. As early as 1856, at Combourg, the care of the poor and the homecare of the elders started, followed by some hospices. The Notre-Dame boarding house was founded at St. Malo in 1864, and, in 1918, the first regional Secondary School was opened. In September 1873, four Daughters of Providence took over the parochial school that was run by the Daughters of Mary, and, in 1874, a Day School and a Boarding School were opened.

Other calls came from foreign countries : in 1897, six Sisters of Providence left St. Brieuc to go and establish a new community in the faraway Canada, in the Province of Saskatchewan, answering to a call from a French priest who wanted a school in his parish. This was the beginning of various implantations in Canada, in the countryside, as well as in the cities and the Indian reservations. In August 1903, facing up with the threats for the future Catholic education in France, a group of Sisters settled in the North of London.

The Daughters of Providence found out a new mission field in France, but, this time, outside Brittany. This will be, in 1935, at Ivry, in the suburbs of Paris where they became friendly with Madeleine Delbrel and her team, as Madeleine expressed herself in her book “Missionnaires sans bateau” :  “I am aware there is an independent school in the most atheistic communes in France. It is run by some Sisters. These Sisters do not wear a religious habit… They know very well how to teach. But, at the entrance of the school, in a wide kitchen, one of them peels potatoes, washes the dishes, cooks, while she welcomes people from the whole neighbourhood, who file off in order to express their problems, worries and joys. The school is nothing but the entrance door for a limitless charity, expanding like a fire.” 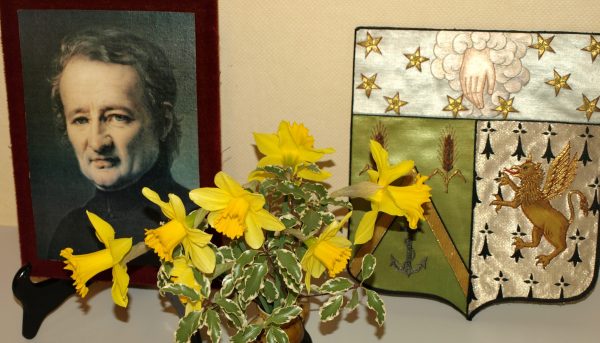 With Lay People and Mennaisian Friends
Since 1981, some lay people have been working with the sisters, sharing their mission and living according to their spirituality. In France, they gather under the name of : “Fraternité Providence Mennaisienne”. 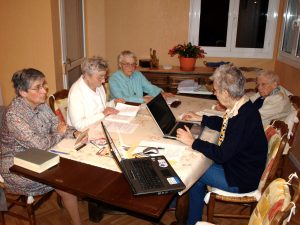 The sisters and lay people are working in France, Canada, England and Uganda.

We have defined again our “Vision Mission”, in the following words:

“We got together because of Jesus Christ and his Gospel. Following the example of Jean-Marie de la Mennais, we wish to live being available to the Spirit, attentive to the events, in a spirit of faith, confidence in the Providence and simplicity. Animated with a deep love of the Church, we try together to make Jesus Christ known and loved. Our presence to the world wishes to be today a service, a sharing, a contemplation.

With  audacity, we collaborate to whatever makes a person free, responsible, creative”.