The Ratio Institutionis of the Congregation, a fruit of hard work on the part of those who have devoted to it a lot of their time, energy and talent, comes to us after a long preparation. In 1998, the Formators, gathered in a session, expressed the wish of having a common formation guide for the whole Congregation. Previously, some Provinces or Regions had made their own projects. But it became necessary, in view of a greater communion, to produce an official approved text for the whole Congregation To realise this project, the General Chapter of 2000 gave a mandate to the General Council to elaborate a project of Ratio Institutionis.

A Commission, led by Brother Josu Olabarrieta, Assistant Superior General, began working on this project forthwith. Relying first and foremost on the texts of the Church on the initial and on-going formation, they acquainted themselves with a number of « Formation Guides » of other Congregations and elaborated a basic text. This was subsequently followed by several stages which permitted the Major Superiors and the Formators to share their own reflections. A team made up of four Brothers, one from each sector, finally studied the diverse contributions and drew up a text that had to be presented to the General Council in view of the General Chapter of 2006.

The Brothers assembled in the General Chapter studied the text they had received previously, and made diverse observations on its form before  it was finally adopted as the basic text. This was then handed over to the General Council, which entrusted the work of drafting the final text to a Commission that would put into consideration the observations made by the General Chapter. This was done in the course of the month of February 2007, in Rome.

After receiving the approbation of the General Council, it was found necessary, for the last time, to have the Ratio Institutionis translated (into other languages). I would like, therefore, before proposing the reading and the implementation of this text to the whole Institute, to thank the Brothers who have worked on its drafting, from the first to the final elaboration of the text, and in passing, those who made contributions and all the translators. Now we have, before us, a document which must be the official reference in matters concerning the initial formation and the on-going formation in the Institute.

When a young man enters the Institute, he is searching for an answer to the call born in the secret of his heart, in a personal dialogue with Christ whom he has decided to follow in a specific form of life, that is the consecrated life according to the Mennaisian charism. When a Brother engages himself by vows to live according to the Rule of Life of the Brothers of Christian Instruction, he engages himself to follow Christ in the manner of Jean-Marie de la Mennais, according to the charism that the latter received from the Spirit, in the Church, the People of God. When a Brothers lives thus, day by day, year after year, with the desire to resemble more and more the One who called him, his steps are sometimes enthusiastic, generous, or hesitant. Sometimes even trials urge him to take on new and liberating strides on the itinerary of his life.

The experience of each and everyone shows that this way to holiness is sometimes a walk in the desert where everything becomes a trial, and at other times, a path with bright sunshine, lined up with marvellous fruits. Committing oneself to live the Rule of Life joyfully with an ardent ad decided heart is one thing; to live it faithfully and perseveringly throughout Brothers of Christian Instruction 7 one’s life is another thing altogether. Formation is the proposed means that helps us to get there. It is not, first of all, a question of acquiring new knowledge, other than that which enables us to know more and more the God who has called us, always recognising more clearly that we are sent by Him to save the youths, at the heart of a Church-communion, together with the Laity who recognise themselves also as called to this same mission.

We must let ourselves be « formed », « transformed », and « transfigured », all along our life. Which Brother can say he has attained holiness? Which one can dare assert that he has no more progress to make in order to respond to the calls that Christ addresses to him today? Which one can certify that he is a perfect image of Christ before the young and the adults? Every one of us knows well that it is a lifetime job to really graft himself to Christ and « realise his own growth until he has built himself up in love » (Ep 4, 16).

This « Guide » is, therefore, a route companion for all the Brothers. It provides the means to be faithful to the Rule of Life, the expression of the Will of God. It will certainly be a precious guide to the Brothers who are responsible for the initial or the on-going formation. But all will find therein the fundamental guidelines that will always be helpful on their journey to holiness. I confide this Ratio Institutionis to the prayer of Mary. She who knew how to listen to the Spirit, and who humbly let herself be taught by her own Son, will let us be transformed by the light of the Spirit who aroused the ardour and audacity of Jean-Marie de la Mennais and Gabriel Deshayes. No, «none of us will enter into the bosom of God, if he has not been conformed to the image of his Son » (S VII, 2172) 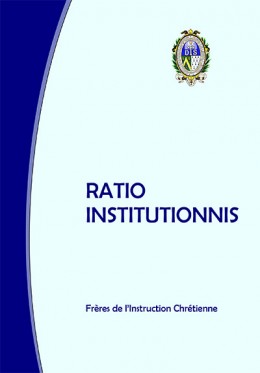