The Feast of August 15th  was a Bouquet of Commitments  of  8 Brothers.
Brothers Rémy MONDELUS and Wenscky JN-LOUIS made their Perpetual Vows. 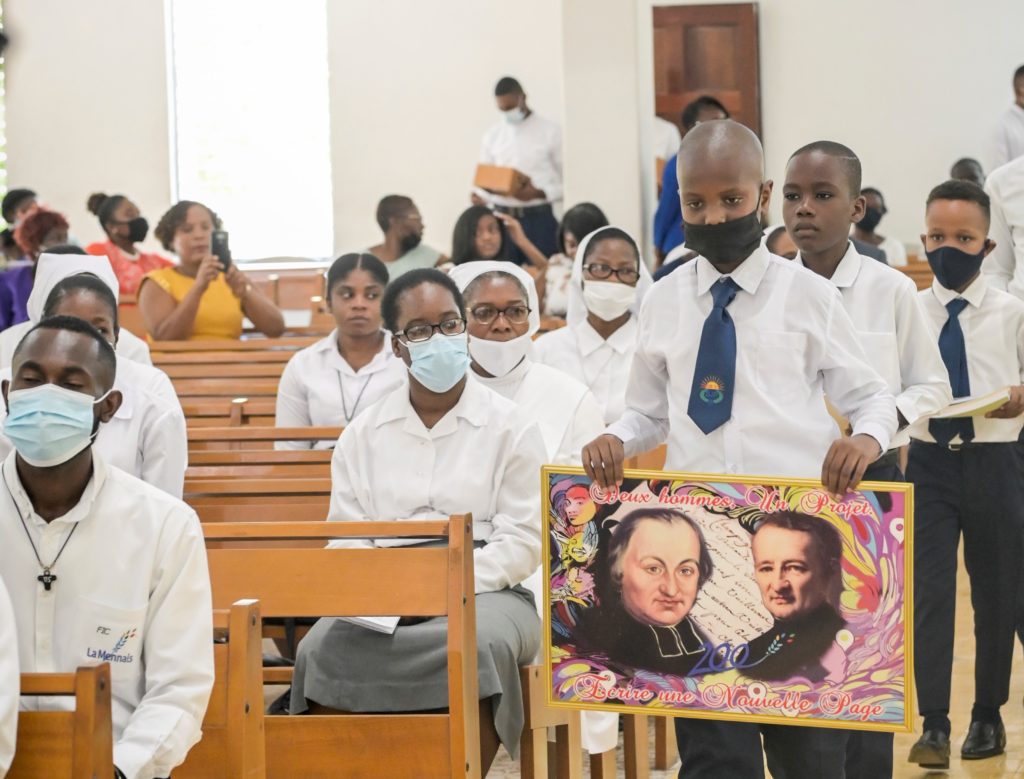 Presided by Bishop Louis KÉBREAU, Archbishop Emeritus of Cap-Haitien, celebrated in the Chapel of the Institution of Saint Louis de Gonzague in Delmas which lends itself well by its Architecture to the solemnities -enriched by a program of well-adapted :Songs, The Ceremony of vows, which took  the entire Solemnity of the occasion of the Feast of the Patroness of our Institute. 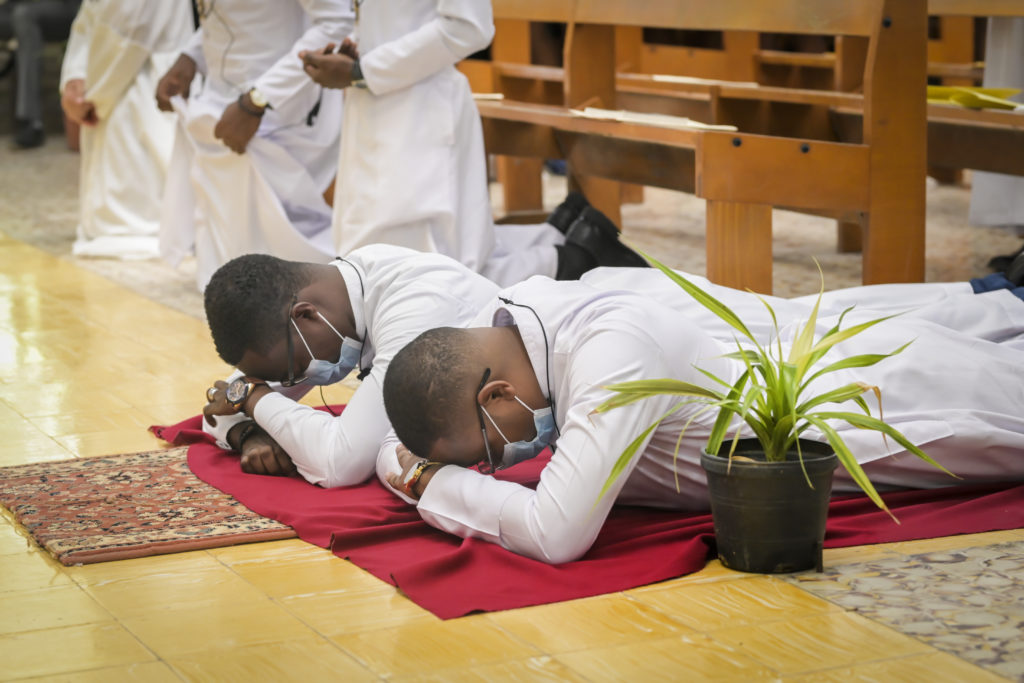 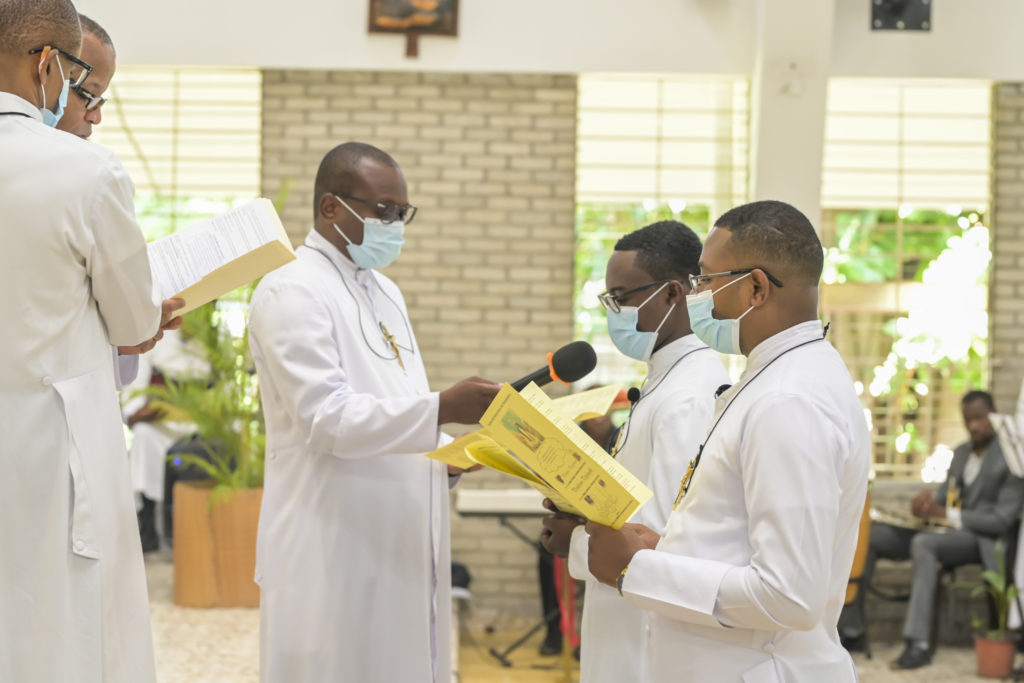 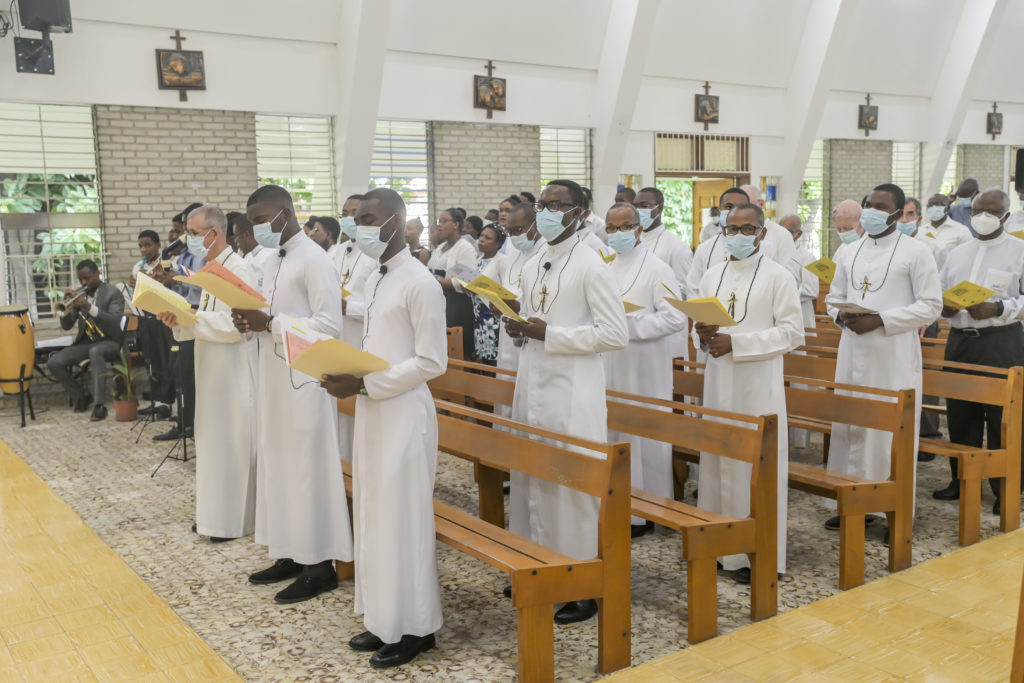 The vows were received by Brother Hervé ZAMOR, Superior General, who addressed the Assembly before the final blessing.
A meal of delicious  dishes, combining the Spirit of Celebration and respect for local circumstances, brought together the families of the Professed, the Brothers and some lay Mennaisians to the conclusion of this beautiful day. For, the previous day’s Earthquake that hit our School in Les Cayes, and the entire Southern part of the Country – see the information on this subject on the site – was present in everyone’s minds. 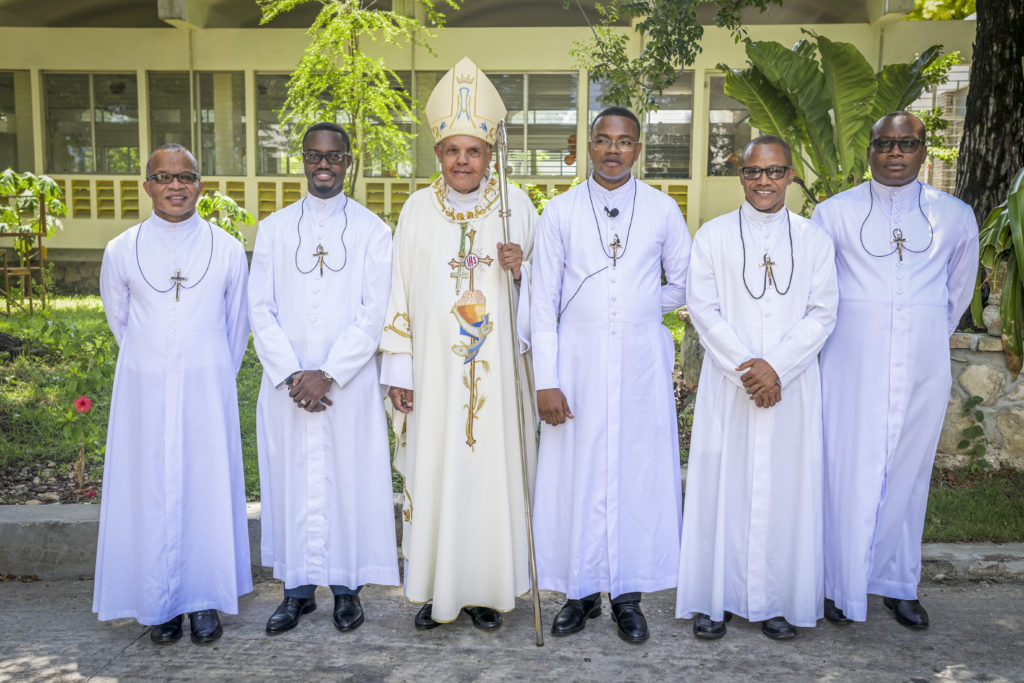 The new Professed  Brothers with the Superiors and Bishop Louis KÉBREAU. 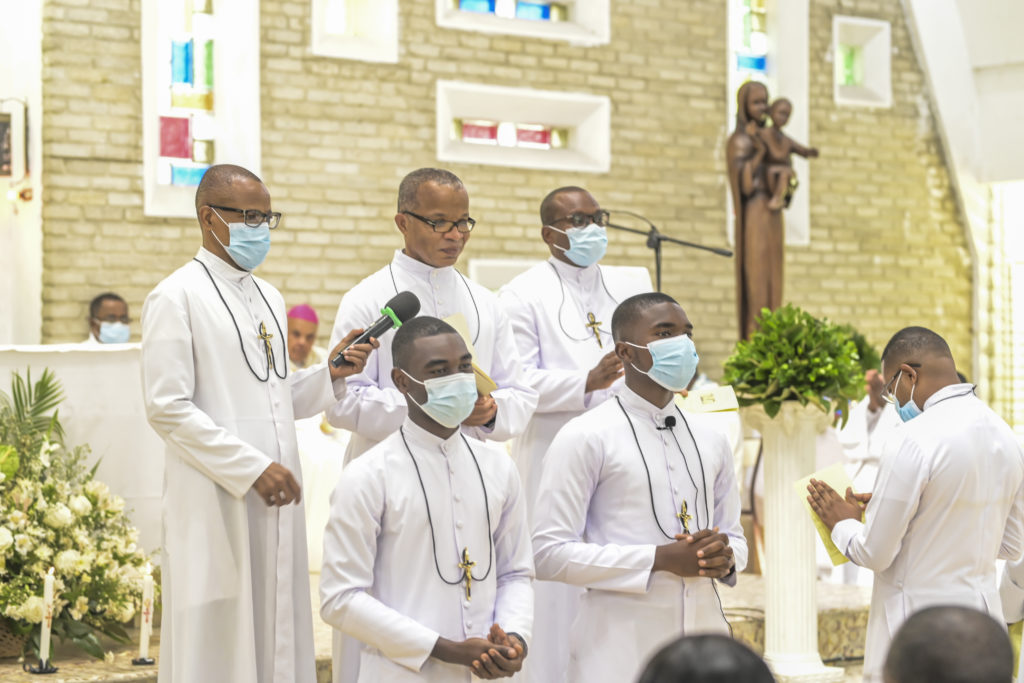 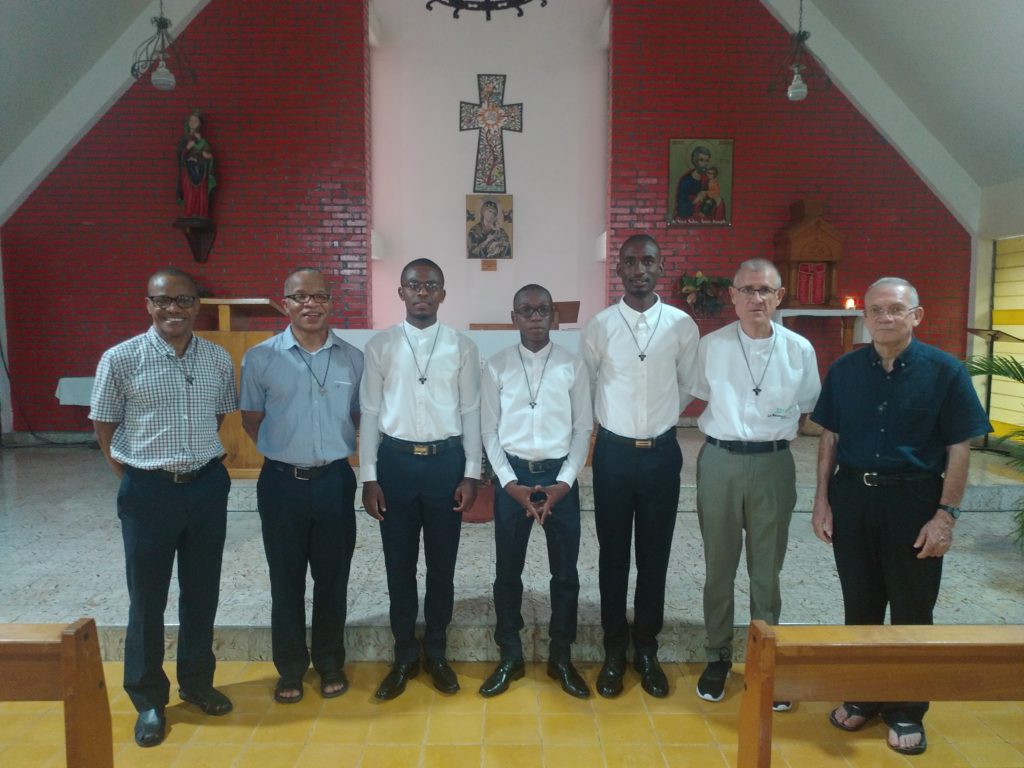 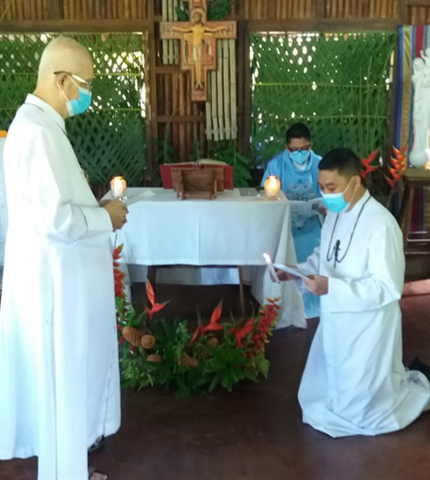 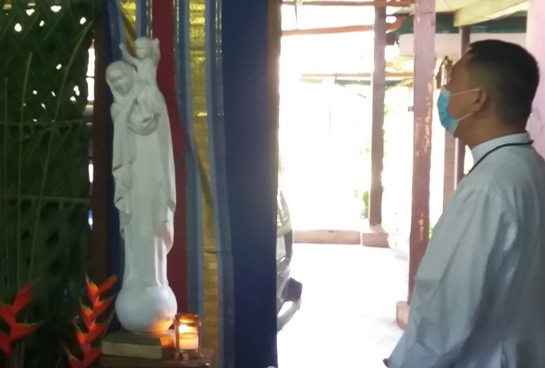 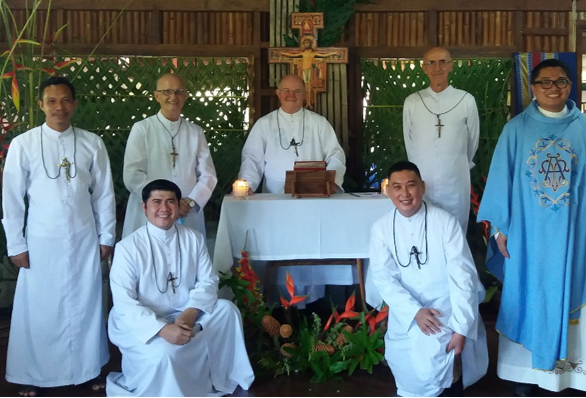 The Community of San José and Pandan surrounded Bro. Israel.

In Haiti, a Retreat and Session lived in Fraternity

Given the special circumstances of the Country, the Brothers of the Northern Communities of the Country began to gather at the «Petit Paradis» where our Houses of Formation are located for Our annual Retreat and the days of Sessions that followed from August 10th.

Despite the situation, all the Brothers present in the Province, were at the rendez-vous for the opening of the Retreat on the evening of Sunday, August 1st.

From the first evening, in the presence of Brother Hervé, Superior General, Bishop Charles Peters BARTHÉLUS of Port-de-Paix shared with us the themes of his lectures. He plunged us back into our consecrated life as an “experience of freedom through the vows” in the “challenges” and “opportunities” that are linked to them.

We appreciated the quality and depth of his interventions and the special touch he put on it by inviting us to conclude each one with a small activity that we are invited to extend throughout the coming year, making this Retreat a reality in our daily lives.

During the Retreat, we also benefited from the presence of Brother Hervé ZAMOR, Superior General, who, braving the advice of prudence, wanted to be among us and was able to meet each Brother. A presence that comforted us. We are grateful to him for this warm and attentive presence towards us in the morose and uncertain situation that the Country is experiencing.

This week of prayer was followed by moments of Formation in order to improve the management in our Schools. Meanwhile, a group of Brothers led the camp of Aspirants at Saint Louis de Gonzague Institution in Delmas. Of the 19 young people present, 11 would constitute the Pre-Postulate group for the year 2021-2022.

Assistant Master of the Novitiate of Petionville