Charles de Foucauld was a Guide in my homecoming with the Lord,” said Pierre Serrand, a Mennaisian Associate from Cancale, France. In Rome on Sunday,15th May 2022, we experienced a very Powerful moment. In two ways. First, with Charles and all his Spiritual heirs whom we met during the Week. Secondly, with the Brothers of the Generalate: a simple Fraternity life of such richness! A moment of deep Joy for Roselyne, -my wife- and me. Our link with Charles de Foucauld? A Retreat at Assekrem on the Hoggar plateau simply made me understand my vocation:as husband and father. Roselyne and I owe our marriage to him. That was 40 years ago. Story

His life took on a new meaning

Charles de Foucauld was made a Saint last Sunday, May 15th 2022, in Rome, during a Celebration that also Canonised 9 other people, including 2 Frenchmen.

Brother Charles is a Saint for our time. It is said that he is the Saint of “New Beginnings”. Indeed, after having abandoned the Christian faith, he returned to God during a decisive Meeting with a priest, Father Huvelin. He simply wanted to talk with him, the Abbot made him kneel down and confess; then he “sent him for Communion”. From then on, his life took on a whole new meaning. Charles was 28 years old by then.

To sum up, there are three aspects of St Charles’ life. A “universal” brother, he lives in the image of Jesus, offered for all men, whoever they may be. His life: that of Nazareth, a hidden life, buried in the simplicity of a village life, service to neighbours, welcoming everyone, opening up to others. United to Jesus in the depths of his being, Charles brings Jesus, even if hidden, to those whom the Lord has entrusted to his love, in the image of the Visitation of Mary to her cousin Elizabeth.

May he live in me! 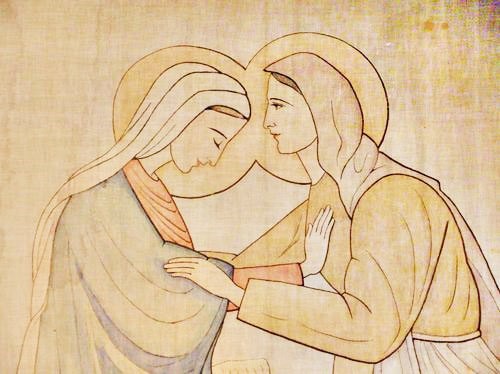 Brother Charles summarises perfectly what guides his life: “To continue in me the life of Jesus: to think his thoughts, to say his words, to do his deeds (…) Let him live with me. To be the image of our Lord in his hidden life: to shout the Gospel from the rooftops with my life. (…) To seek God alone. 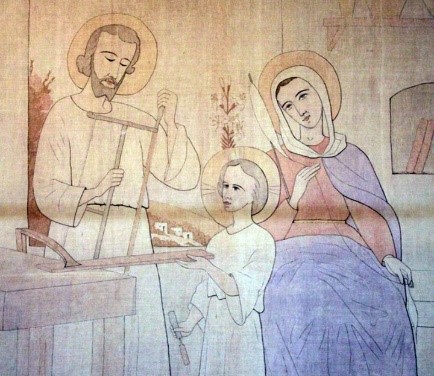 3 Drawings by Charles de Foucauld, painted on the walls of the Chapel at Beni Abbès

“Carry the Gospel not by preaching it with your mouth but by example, not by announcing it but by living it: sanctify the World, bring me to the World, as Mary brought me to John. »

Listen here to an excerpt from the Gosepl in Arabic

I am also attaching here the Gospel in Arabic. I think it is beautiful. The passage is about: “There is no Greater love than to lay down one’s life for his friends ». It was during the Thanksgiving Mass for Charles on May 16th 2022 at St John Lateran. 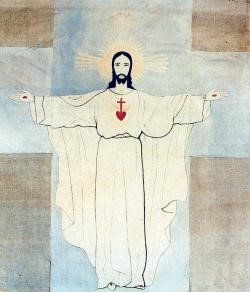