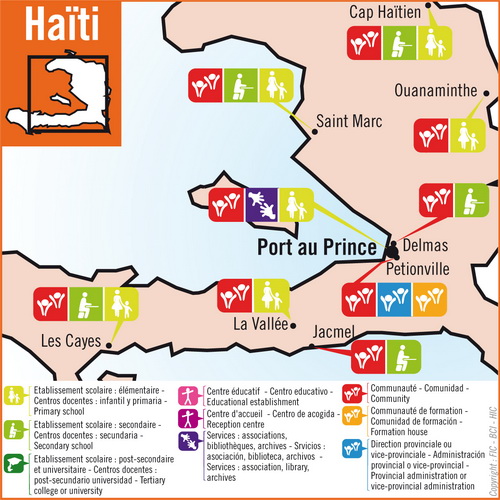 On 13th May 1864 : arrival of the first four Brothers
At first, helped by the French Province, the mission is rapidly reinforced with Canadian Brothers and later on, with Spanish ones. More than 600 Brothers have worked in Haïti. There are today about 50 Brothers, mainly of Haitian origin. 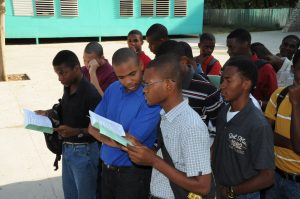 Schools in constant development
Thirty-five different towns have welcomed communities and schools. The evolution of the educational system obliged the Brothers to use creativity: construction of Secondary Schools at Cayes, at Cap Haïtien and at St.Marc in order to guarantee continuity of Primary schools.

Pioneers
Like in the past, in the field of Haitian literature or that of pedagogy, the Brothers were involved a lot in working out a teaching method in Creole, the creation of textbooks…

A window on the world
Very inserted into the Haitian educational world, the Brothers’ activities are not confined therein: sports, apostolic animation, welcoming groups, openness to the neighborhoods, literacy are part of the daily lot  of communities.

The earthquake of 12th January 2010 totaled 300 000 deaths including Brothers Joseph Bergot and  Dominique Baron. The toll of the earthquake for the Province: St-Louis school of the city centre is completely destroyed, Jean-Marie Guilloux and St Joseph of Pétionville schools and that of Jacmel have to be rebuilt, the La Mennais Provincial house in Delmas has to be demolished,  the Juniorate in Pétionville, St Louis Gonzague Institution of Delmas, the Primary School of La VAllée and the Gabriel Deshayes House of Pétionville have to be repaired.

Since then, all these projects were completed, and a new vocational school was built at La Vallée de Jacmel. It offers two technical courses: Building and Restoration – Hotel industry. Something new also, the Notre-Dame des Anges educational Centre – CENA- has just been set up  in the Cité Soleil – a shanty town of Port-au-Prince- in February, 2016, catering for children dropouts. It is a joint work of the FIC, Priests of St Jacques and the Sisters de Cluny, three Congregations which arrived together in Haiti, 150 years ago.

In 2018, election of Brother Hervé ZAMOR, Superior General of the Congregation. He was until then Provincial in Haiti.
WP2Social Auto Publish Powered By : XYZScripts.com
Posting....