We are in Auray on September 9th, 1820. Nicknamed the ‘Eternal Father’, this chapel welcomes young people at the beginning of a retreat, that is to say, of a spiritual time. The young men present anticipate that important events are coming up…

Here we present the great moments of the decisive retreat, drawing on the number 47 of La Mennais Magazine which has just been published and of which the 1st part is devoted exclusively to this founding event . On 9th September, 2020, the day after the anniversary of the birth of Jean-Marie de la Mennais – 8th September, 1760 – the General Council of the Brothers is also proposing to live a time of celebration.

Gabriel Deshayes, parish priest of Auray, vicar general of Vannes, gathered from January 1816, a group of young people to endow rural and small towns in Brittany with Christian masters. It is becoming increasingly popular. Municipalities, like Thénezay and Baud, already know the physiognomy of young people, housed in the presbytery, passionately engaged in the work of Christian education.

Jean-Marie de la Mennais, vicar capitular of the diocese of Saint-Brieuc, felt the same way when capitalizing on the needs on an integral school, where the Christian dimension permeates all education. For his part, he welcomed the first volunteers in 1819 with a common purpose. 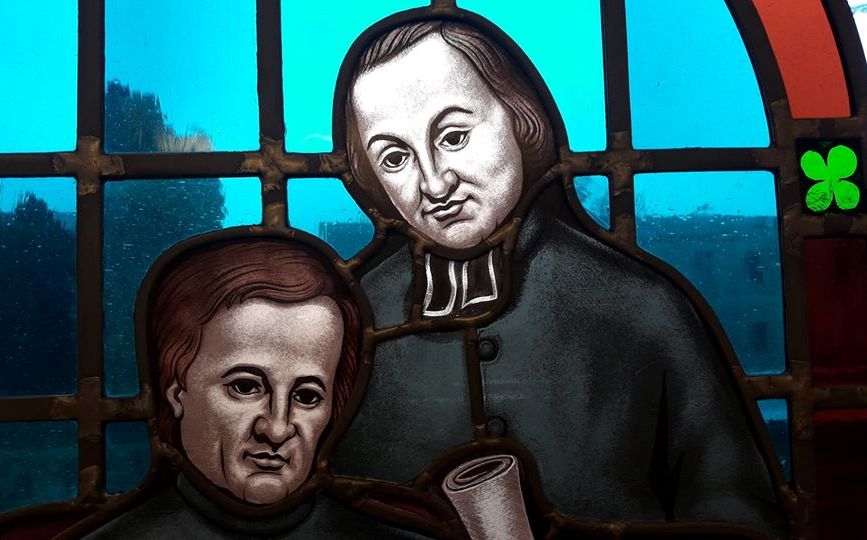 Together, he and Father Gabriel Deshayes signed a “Union Treaty” on June 6th, 1819, in Saint-Brieuc, driven by the common purpose of founding schools animated by well-formed teachers. If the Founders had met many times, their disciples likely wanted to get to know each other. Also, what is called by Father de la Mennais a “great retreat” promised to be important with no doubt being the key to major decisions.

One and the same family

“We were waiting with a kind of impatience,” testifies Bro. Hippolyte, “the time when we would be able to see the children of the two cradles of a small society together, so as to form, according to the expression of our founders, ‘one and the same family. In the year 1819, the September retreats were held in Auray, where around twenty Brothers and novices surrounded Father Deshayes and ten retreatants in Saint-Brieuc around Father Jean.

This time, it was agreed to make common cause in Auray where Father Gabriel had been parish priest since 1805. He had been fully involved in it for years with the opening of schools, the creation of a spinning mill, activities for the unemployed and a weaving workshop for prisoners. 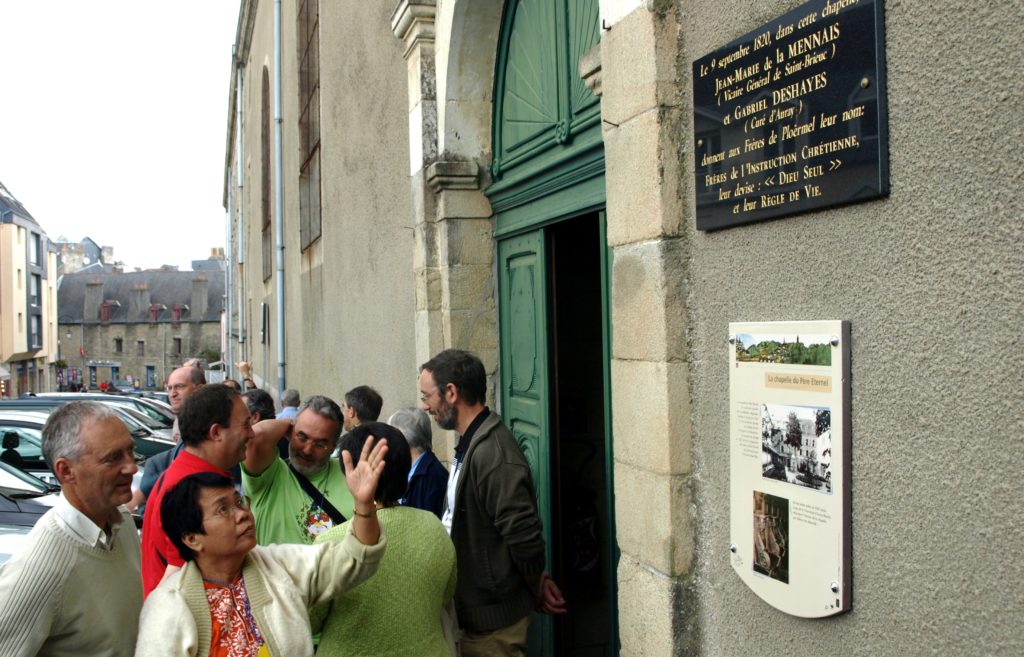 The time has come to gather energies and carry out spiritual exercises together. Here, in Auray, during the 2015 International Assembly of the Mennaisian Family. 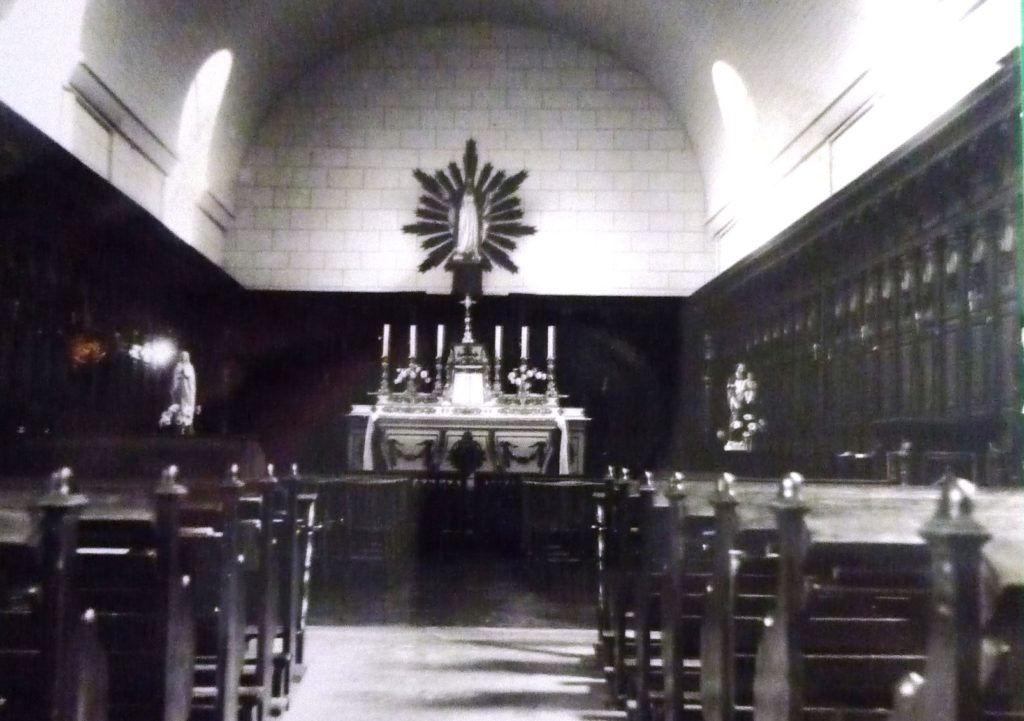 Old view of the Chapel of the Eternal Father, in Auray.

They meet at the chapel known as the Eternal Father. This was acquired in 1807, at the request of Fr. Deshayes, by Mrs. Molé, who became Mother Saint-Louis, foundress of the Congregation of Charity of Saint-Louis, in Vannes.

Here we are Brothers of Christian Instruction

This is the first time when young volunteers, aged 16 to 28, gather together to become schoolteachers. There are certainly 36 of them: 27 from the Auray novitiate and 9 from that of Saint-Brieuc, probably more. Many of them speak only Breton. It is Saturday September 9th, 1820, the great retreat opens. 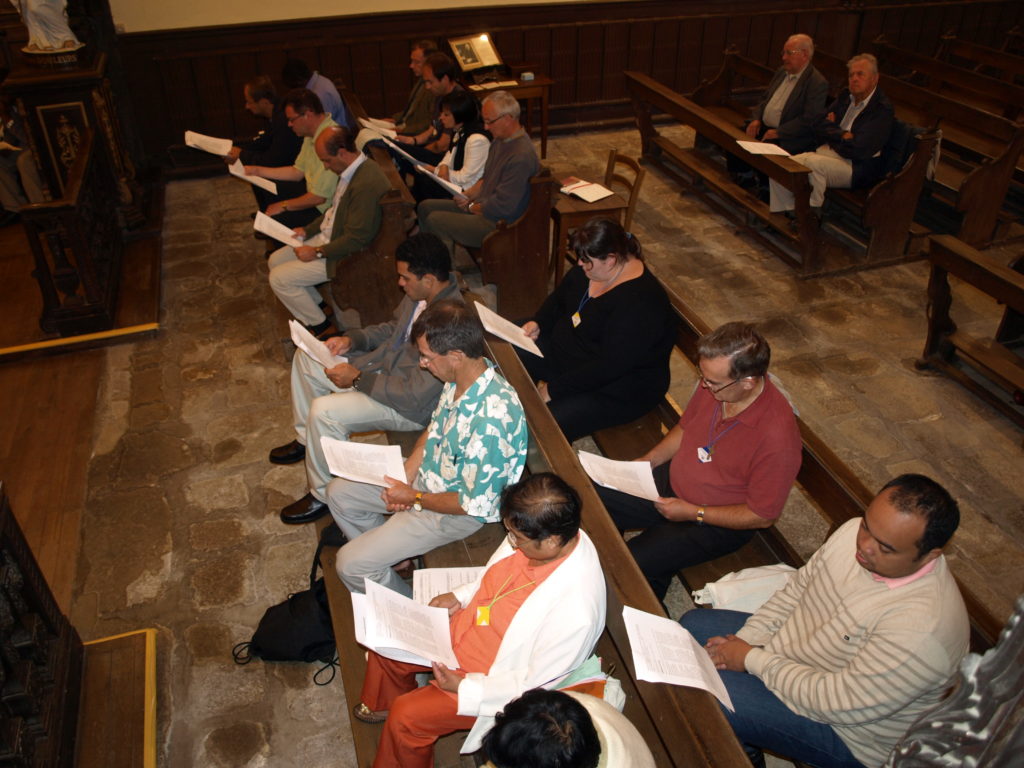 The two Founders are there. They share the retreat’s animation. Father Gabriel gives meditations and the conference. Father Jean delivers the opening sermon “with a force capable of convincing those most opposed to the conviction,” assures Bro. Augustin. This inaugural preaching is full of advices that touch hearts and minds.

Bro. Hippolyte testifies that, on this same September 9th, “the two superiors named us Brothers of Christian Instruction.”

“I am ‘Brother’,
Brother of all those whom God sends to meet me,
Whatever their fortune,
whatever the color of their skin.”

A Rule as a gift from heaven

A Rule at the service of life. It wants to be a path of wisdom, joy, and fidelity. This rule was solemnly read on September 9th, in the chapel itself, then commented on by Jean-Marie de la Mennais on the following days. It was received as “a real gift from heaven”, assures us Bro. Augustin. Father himself dictated it to “school directors, which covered three or four large pages”, testified Bro. Julien Kerdavid. 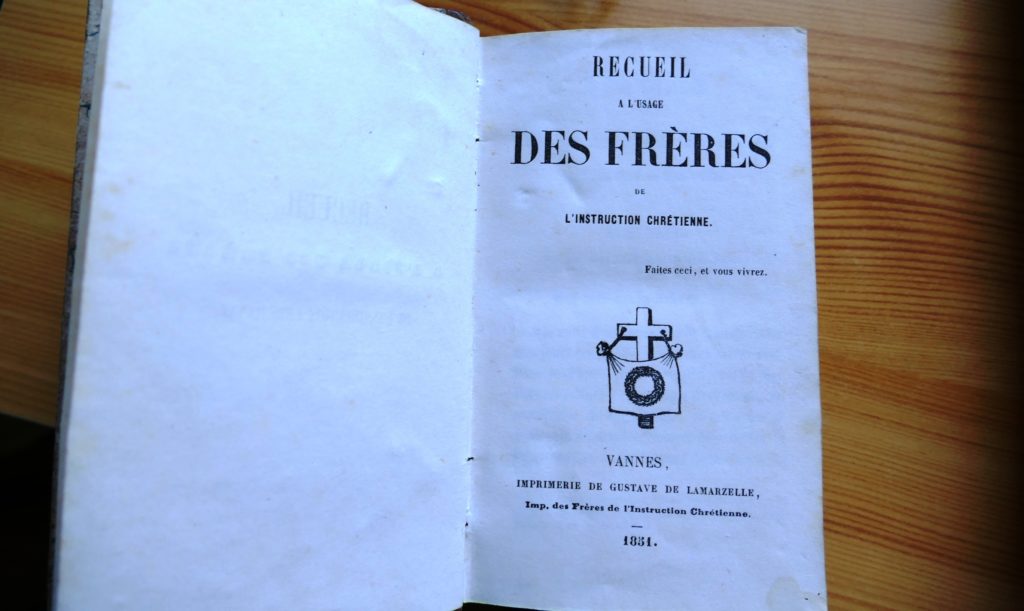 The first Rules were copied by hand by the Brothers. The first printed text dates from 1823, with the statutes of the Congregation, then the title became: Recueil à l’usage des Frères.

Gabriel Deshayes also explains how much he relies on “the exact observance of the Rule. Heaven’s blessings, the progress of the Congregation and the fulfillment of the hopes placed in it depend on it.”

“See, I set before you today life and prosperity, death and destruction. For I command you today to love the Lord your God, to walk in obedience to him… then you will live and increase.” Dt. 30:15-16

A solemn investiture of the religious habit

The Brothers already have a special religious habit which they put on without special ritual. “Our Brothers,” writes J.M. de la Mennais, “wear the simple cape of black caddy, closed from behind like a cassock… The hat is round. In winter, the Brothers cover their shoulders with a little cloak that goes down to the elbow and that closes with buttons.” 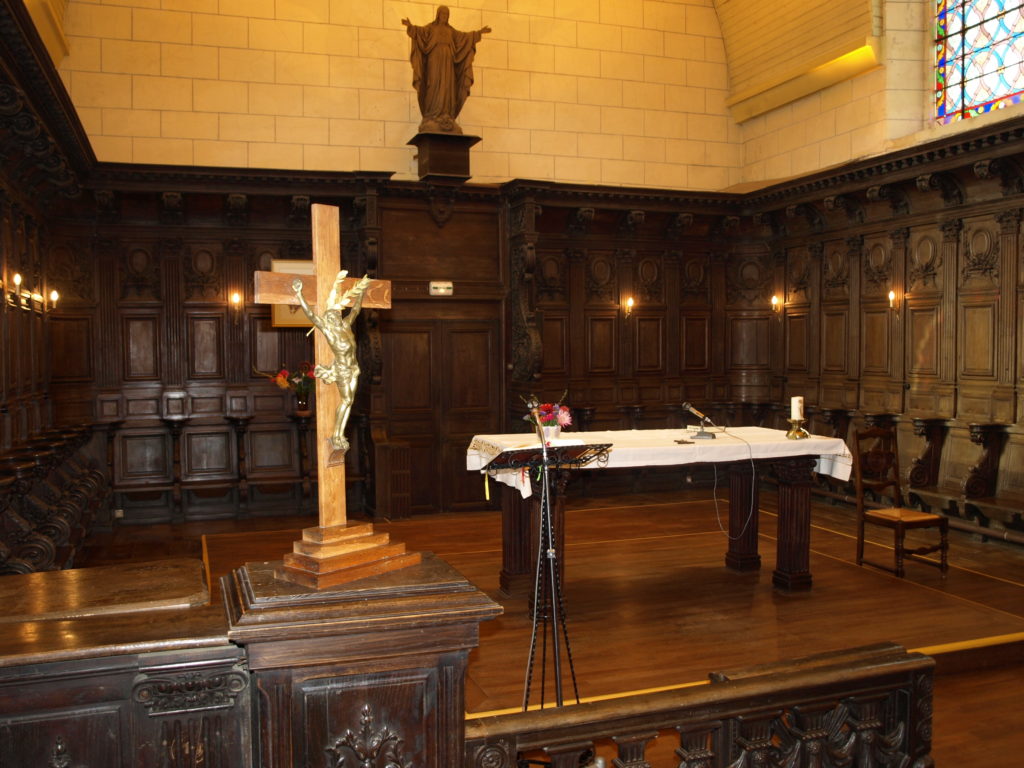 We are on the last day of retreat, the chapel is the scene of an emotional historical moment: each retreatant puts on a new Religious habit, symbol of a new life. 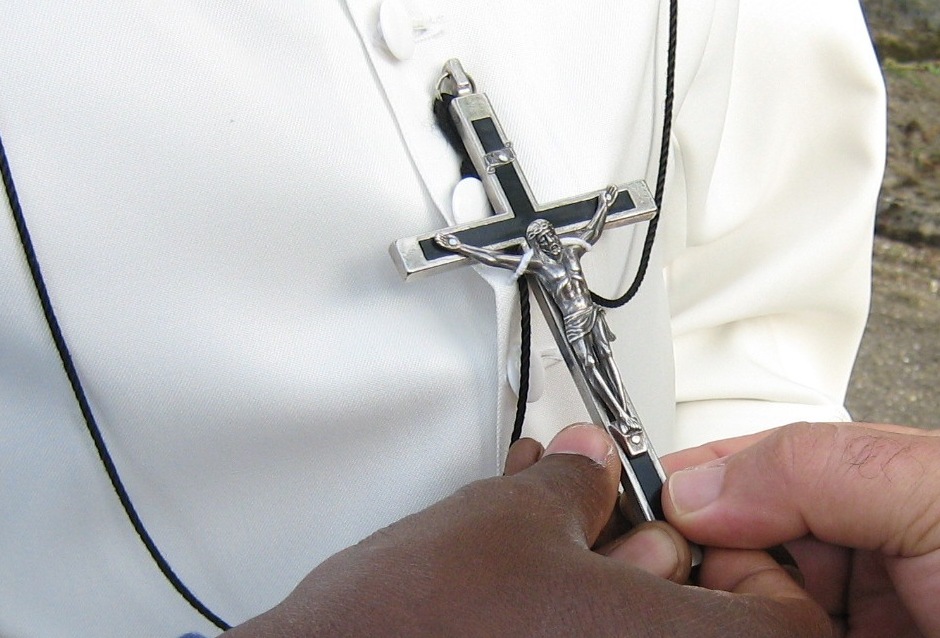 The crucufix received by the Brothers

On the last day of this ‘Great Retreat’, wishing to mark the fact that entering religious life was a break from the world and to strike the imagination, the Superiors organized a solemn investiture of the Religious habit. Likewise, for the postulants who had not yet received a Religious name, it was also at this time that they received one. The cross that the Brothers wear also dates from this retreat, but then, on that date, it was carried hidden under the Religious habit. As early as 1823, the cross was being conspicuously carried. 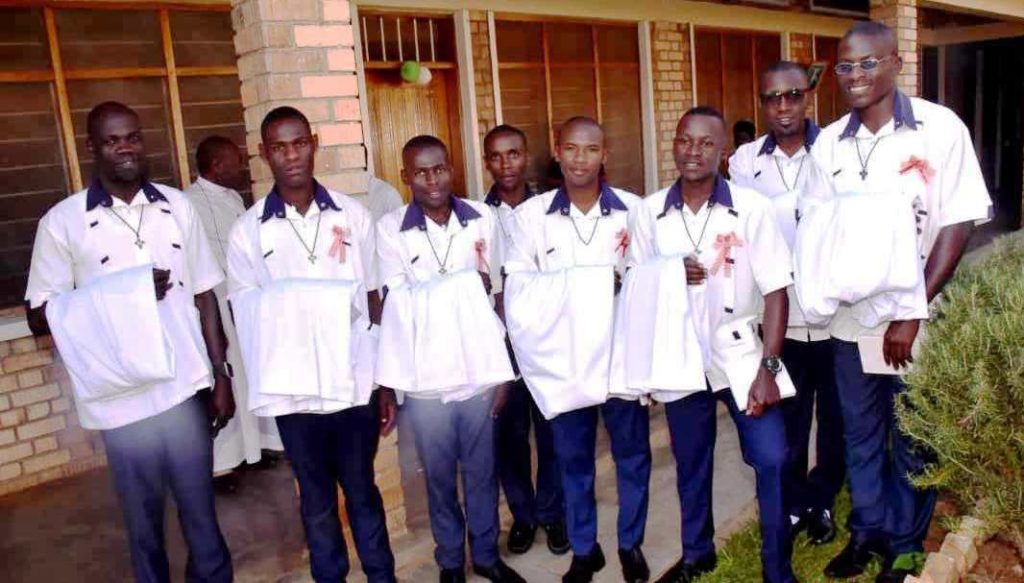 Before taking the habit, during the 1st profession of the Brothers of the Province of St. Teresa, in Kasasa, Uganda, last January.

“I make a vow of obedience for a year”

While the taking of the Religious habit has just taken place, the vow of obedience is explained by Father Jean. The two Founders heard the confession of the retreatants, except the postulants who did not know enough French: a Breton priest was at their disposal. 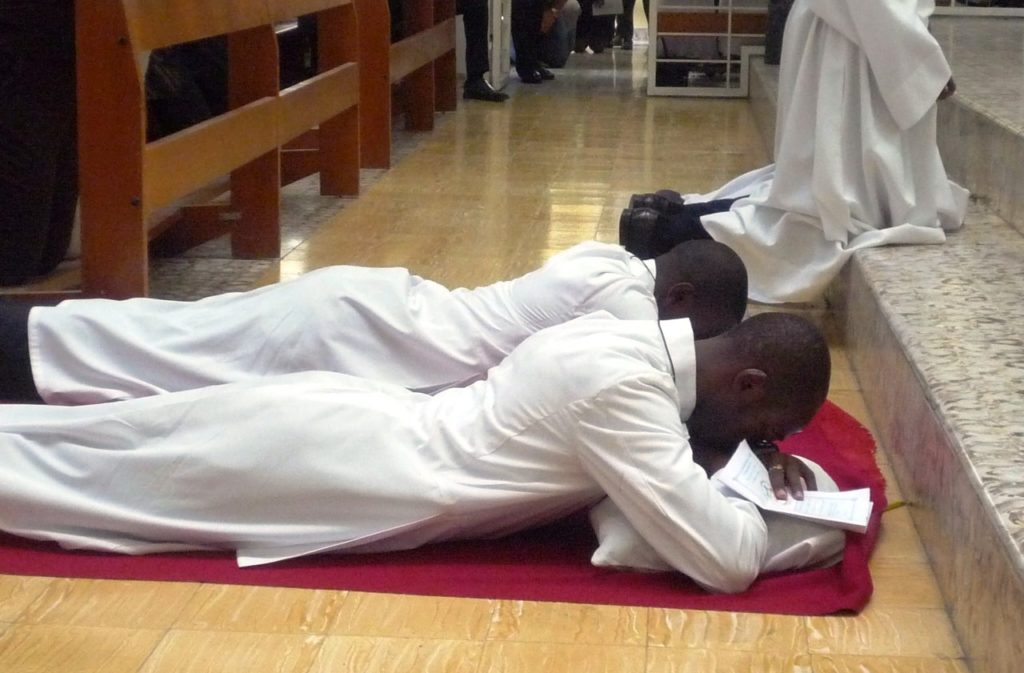 One after the other, on the steps of the altar … Here, during two perpetual Professions of Brothers.

On this Friday, September 15th, 1820, the moment is intense and emotional. “One after another, on the steps of the altar, in front of the Founders who were standing, the Brothers pronounced the formula of their vow.” 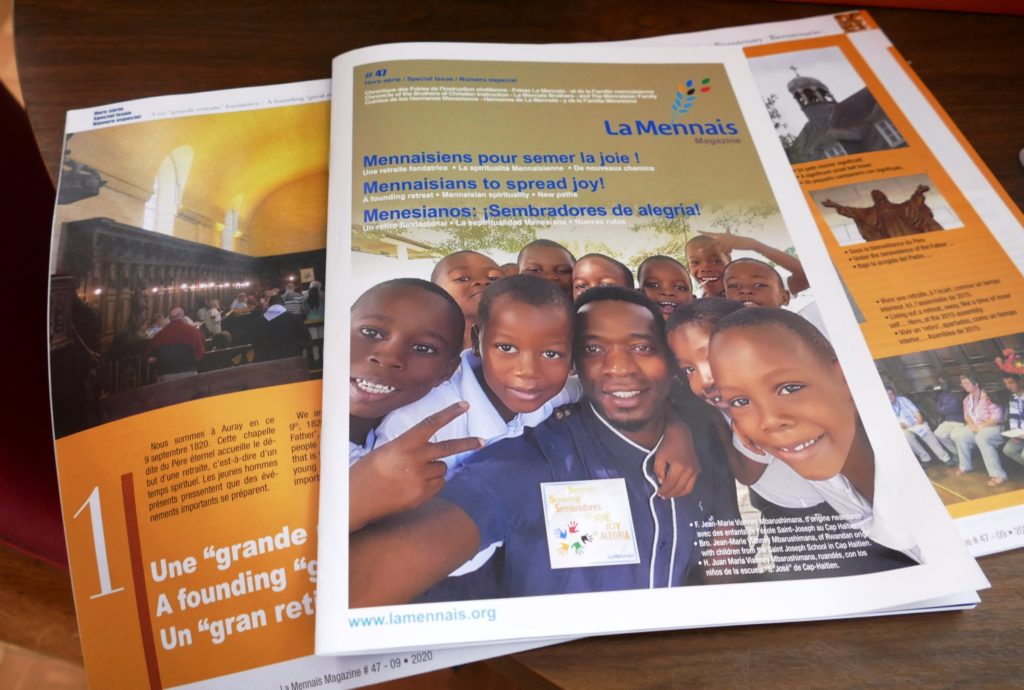 Birth of the Congregation

A birthday celebration is proposed by the General Council of the Brothers.

Let us pray in union with the entire Mennaisian family spread throughout the world, asking the Lord to help us to be faithful to the intuitions of John Mary de la Mennais and Gabriel Deshayes, always in search of the Lord’s paths in today’s world. 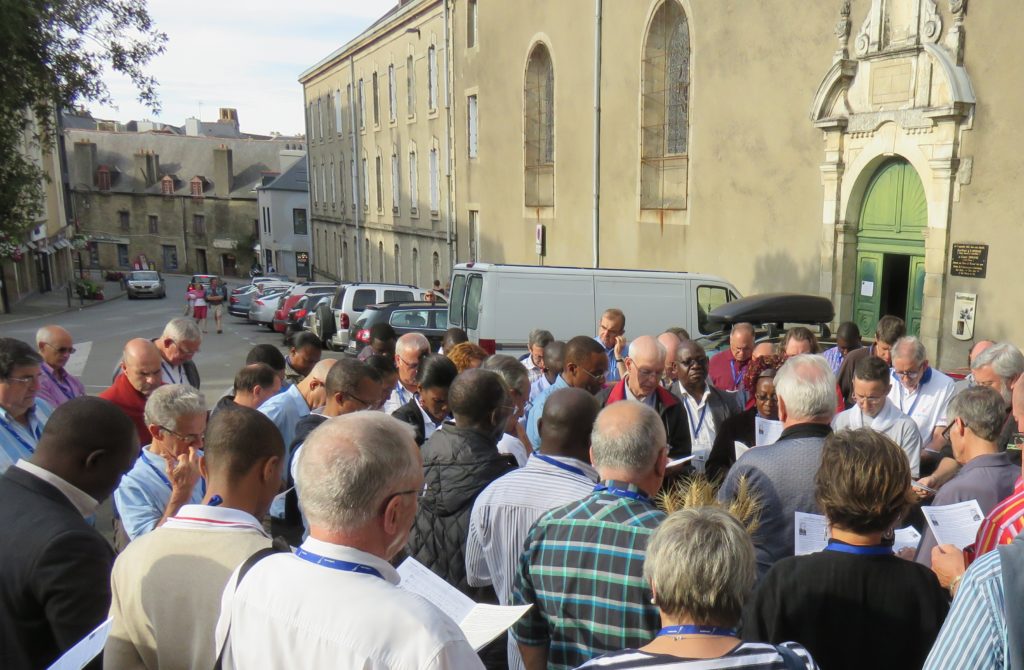 We thank the Lord for the two hundred years of existence of the Congregation. We remember a founding moment, the Retreat lived by the first Brothers at Auray, in September 1820, in the Chapel of the Eternal Father. There, the Brothers who were together with Jean-Marie de la Mennais met for the first time those who had been gathered by Father Gabriel Deshayes. They received the motto “God alone”, the name of the Brothers of Christian Instruction, the habit and the Rule of Life. There, took place the first profession of the Vow of Obedience. Historians tell us that various enthusiastic young people entered and that a Congregation of Brothers came out of it.

Today, we thank the Lord for the history, past and present, for all the abundance of the gifts of God’s love that this initiative of two people has inspired, for all the places where today Mennaisian education continues to give meaning, hope and faith. 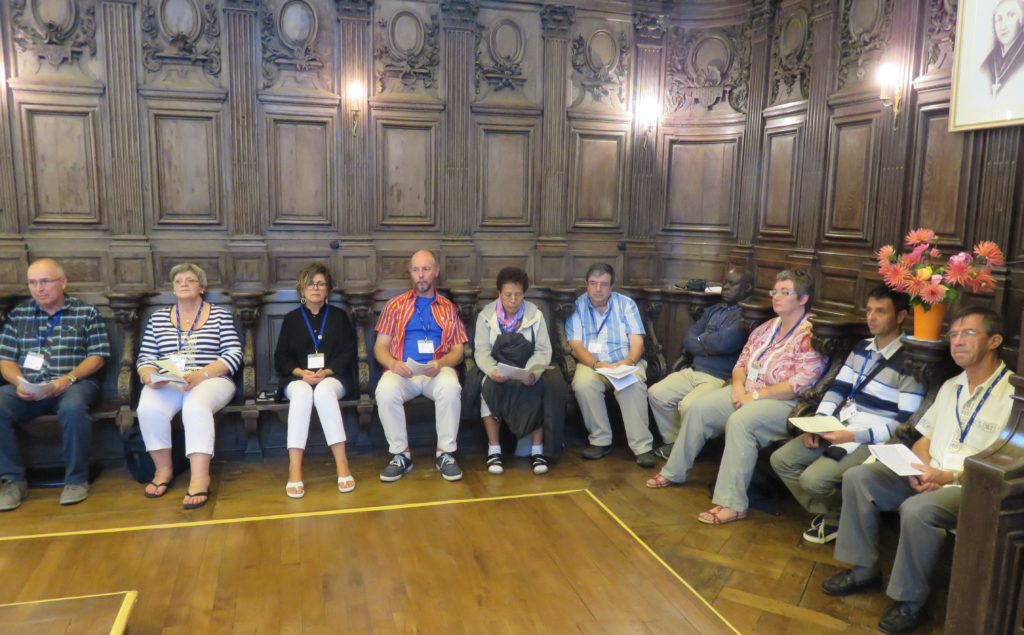 At Auray the Brothers received a motto to guide their lives. Since then, God Alone has been the beacon that illuminates the way of the Brothers and the Lay Mennais. Help us, Lord, not to be seduced by other “lights” which lead us astray on the way.

We need your help to trust you. Help us, Lord, to be faithful.

At Auray the Brothers received the Rule of Life that gives life to fraternal life, which places the Congregation as part of the Church, marks its mission and specifies its charism.

We need your help to know how to work within the Church. Help us, Lord, to be faithful.

At Auray the Brothers received the habit and the crucifix that these would be the memory of your constant call to self-giving, humility and  to witness.

We need your help to continue being witnesses, Help us, Lord, to be faithful.

At Auray the Brothers received their Being Brothers, so as to be worried about each other, to support each other and form a united body for mission and in dedication.

We need your help to continue being united. Help us, Lord, to be faithful.

At Auray the Brothers were united in seeking the will of God by professing obedience to the superior.

We need your help to continue being faithful. Help us, Lord, to be faithful.

Today the entire Mennaisian Family is placed in your hands, Lord, we ask you to accompany us, that we will be able to discover your ways so as to be signs of your love, of your affection and to be close to the young people of today, and be concerned for each one.

We need your help, Lord. Help us, Lord, to be faithful.