This was the first visit of the Superior General, Brother Hervé ZAMOR, to this area of ​​the Congregation. The Brothers were overjoyed to receive him and his physical presence in the Province coincided with the colourful festivities that took place at the end of the year 2018 and at the beginning of 2019.

First of all, on the 31st of December 2018  was the entry into the Novitiate of 9 new Novices: one from Rwanda, one from Tanzania, and seven from Uganda. The celebration took place at Mt St Teresa Kisubi in the presence of the Brothers, relatives  and  friends of the Postulants   who had been admitted into the Novitiate. Brother Hervé Zamor, the Superior General welcomed these young people into the Congregation and encouraged them to persevere in their commitment. 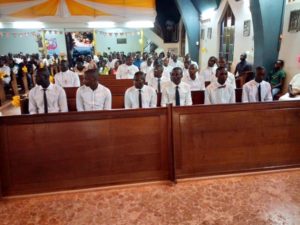 On the same day, in the evening, 28 temporary professed Brothers renewed their religious vows before the Superior General, surrounded by Brother Vincent Ssekate, Assistant General and Brother Peter Kazekulya, the Provincial Superior. 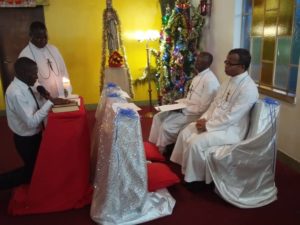 Then, on the 1st January, 2019, a big celebration took place in Kisubi –at the Provincial Headquarters. 11 Novices among whom was the first South Sudanese by the names of Alex Elisapana pronounced their first Religious Vows. Bro. Alex’s profession was an encouragement to the two missionary Brothers present at Riimenze, to continue their apostolate in spite of the difficulties of the mission. The rest were two Brothers from Rwanda, one from Tanzanian and seven from Uganda. 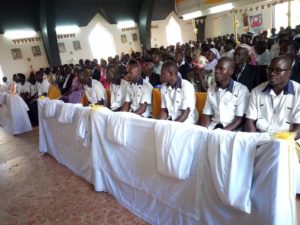 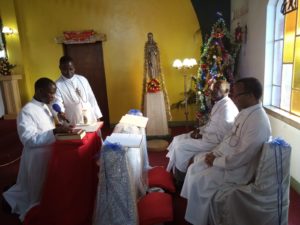 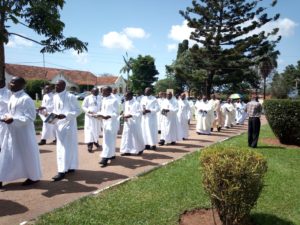 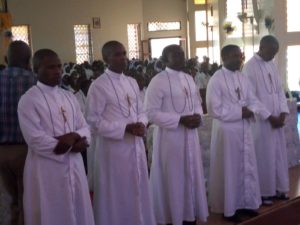 “We have reasons to rejoice and thank God for the above mentioned new Novices,professed Brothers and  the 3 Jubilarians who have been faithful to their Religious commitments for the last 25 years, events which coincide with this year’s  opening of the bicentenary celebrations of our Congregation.

Close to God, certainly our Founders participated in our joy and thanksgiving ” Bro. Hervé Zamor, S.G.)