“Make your life a service”. This is the red thread defined by St John the Baptist Province to touch the hearts of Children, Youth, Educators and Brothers throughout this year 2021-2022. The Mother House of Ploërmel was the crucible of a beautiful feast on Sunday, the 22nd with a generous Sun and smiles on the faces. Opening Meeting of the New Year, Brothers and Laity – included Lay Mennaisian Associates-LMA, “Tutelle” delegates, Responsibles in charge of various Services of the Province… – lived a time that was at once Convivial, Festive and Spiritual. Brothers from West Africa, Italy, Haiti, the Philippines and England were also present, while the day was presided over by Bishop Laurent Dognin of Quimper and Leon. 16 Jubilarians surrounded by their families were honoured, especially Serving. The key words of the year were drawn on the floor of the large La Mennais Amphitheatre at the Mother House. A symbol. « We are invited to make our life a service, not by appealing to others, but directly in my life, commented Bro Yannick Houssay, Provincial of France-England. To serve the other, God, the Creation, with respect, humility, brotherhood. We are sent by Christ. It is a matter of decentralizing ourselves, with Mary as our Guide and Support.”three Brothers marking their 50 Years of Religious life. Shown in pictures

“No one hired us” 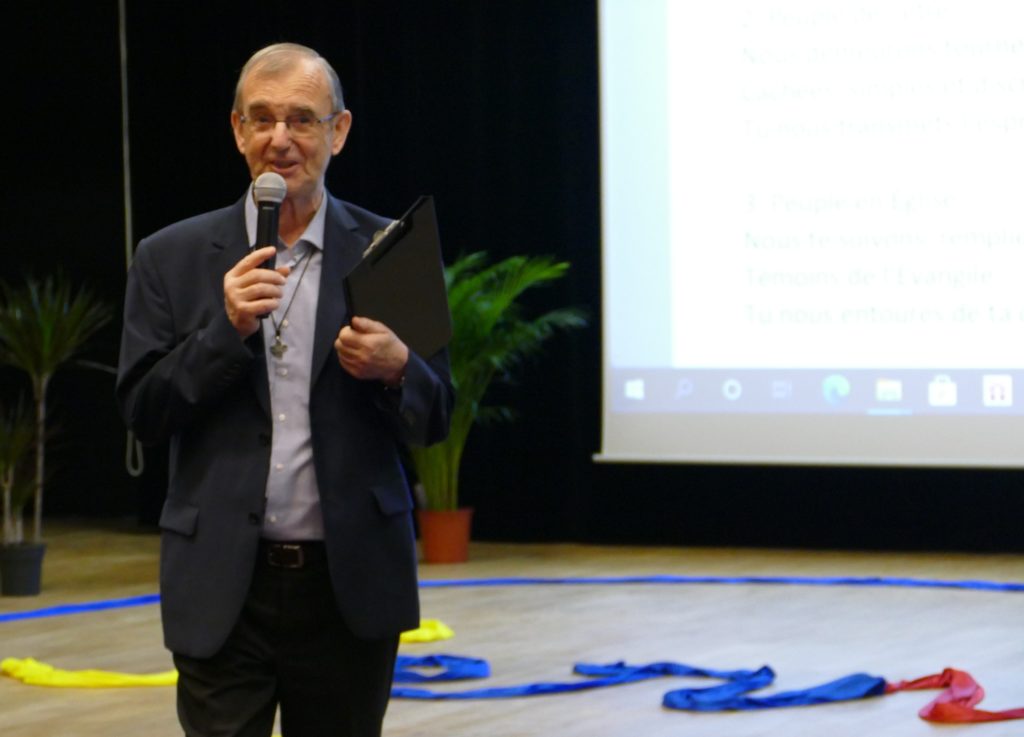 Bro Yannick Houssay, Provincial: “We received this invitation from the General Council to make our lives a service.”

In opening the day, a time of Meditation written by Bro Jean-Yves Hamon on the Gospel text of the servants and talents, contributed to setting the tone with gentleness and peace, read by Bro Victor Sambiani and Chantale Devaux.
“We were hired and sent to the Master’s vineyard with a promise.”

“Enter into the joy of your Master.” 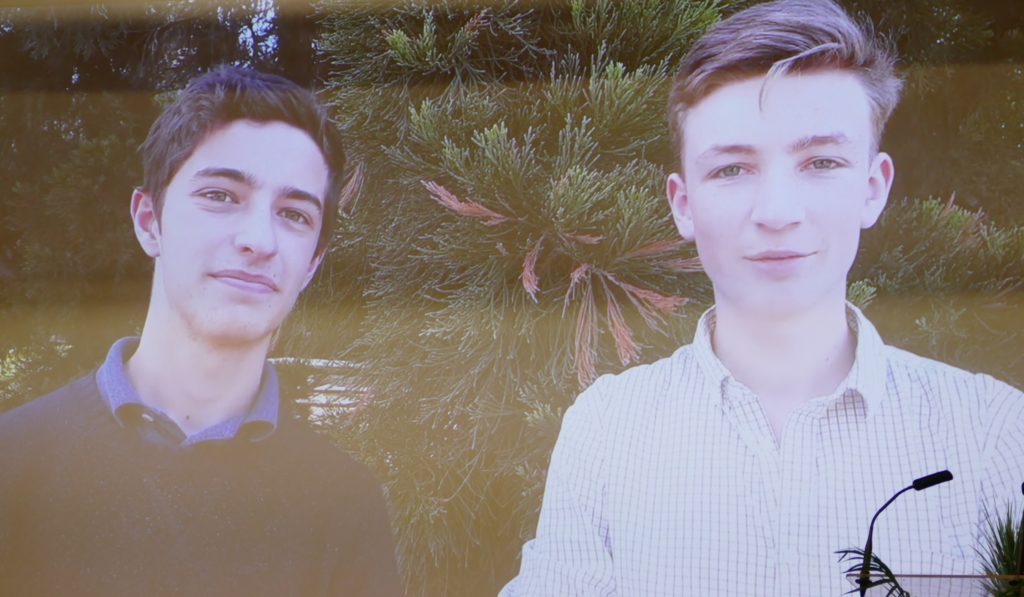 Young people then intervened via the video to tell the story of what serving meant to them, starting from what they have experienced in voluntary actions, by being younger Tutors, by participating in solidarity meals, by collecting food, by acting for the Environment…

A clip video was also proposed by the Tutelle team to the La Mennais Schools and Educational works to launch the year with the theme.  See here : https://www.youtube.com/watch?v=rYdpSbr2DlA

Presentation of the theme : https://www.youtube.com/watch?v=Zhs-m77E-MA&t=1s

A padlet – a platform that brings together documents, pictures, video, etc. – is now also available for this purpose. See here : https://padlet.com/bernadettepetton/7v7675g13ktmic6h 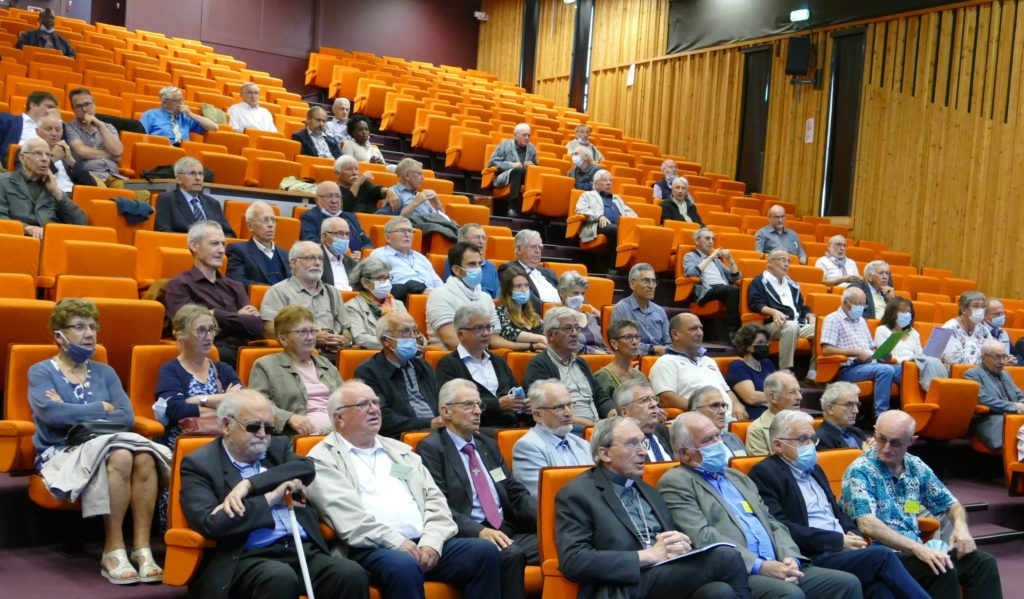 Brothers and laity, Jubilarians and their families.

Surprise: A song written by Patrick Richard «For God alone» composed on the occasion of the Bicentenary of the Brothers was presented for the first time. We shall come back soon with the Text and Music. 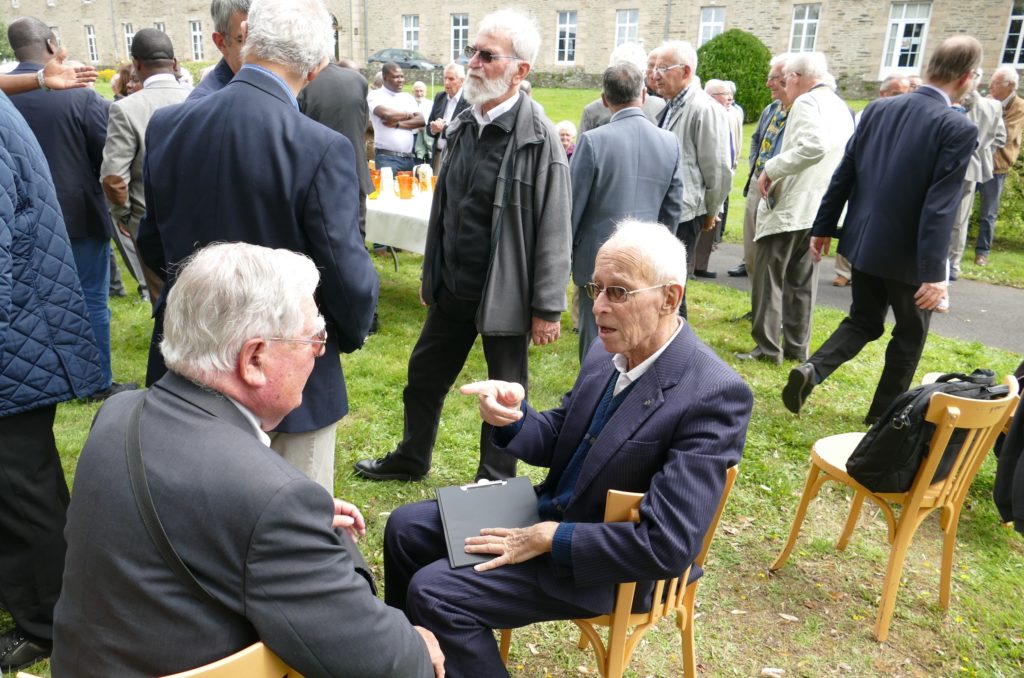 Bishop Dognin. “What promise in my life?
What gave me an Orientation ?” 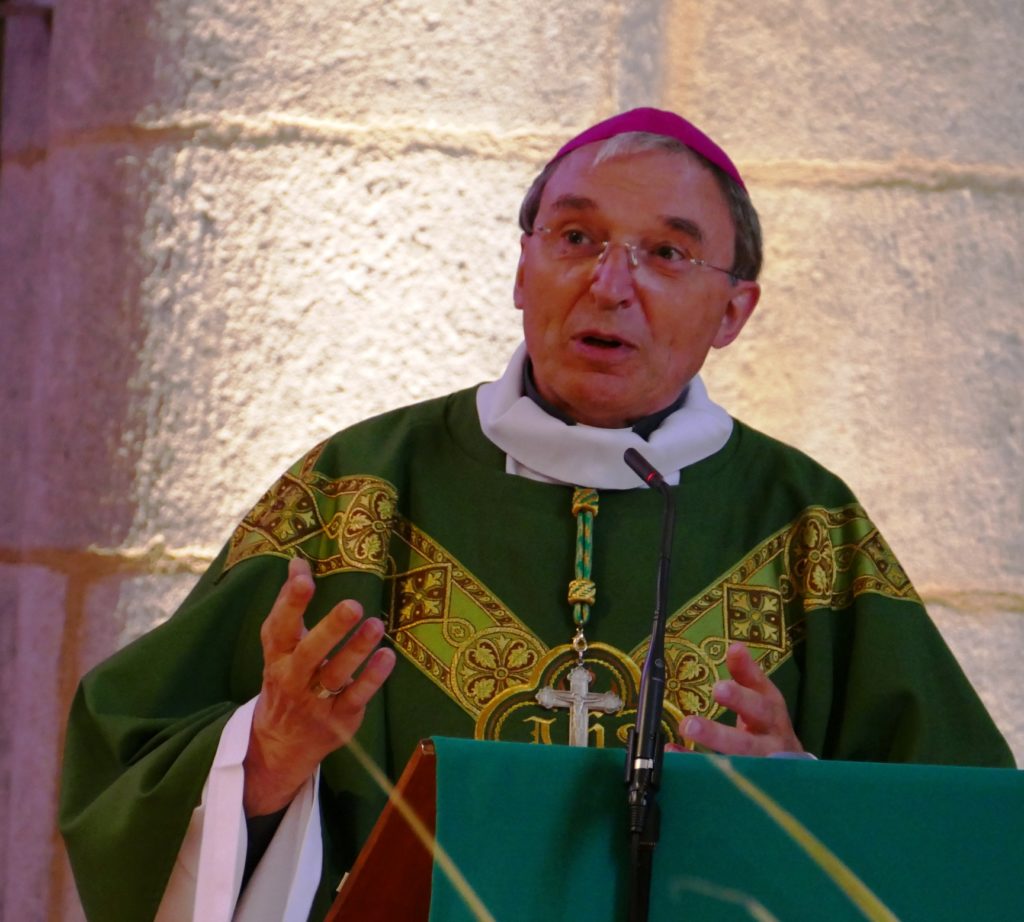 At the beginning of my life, what promise did I hear, Bishop Dognin asked  himself while commenting on the Gospel of John (6:60-69): «Do you also want to leave? » and greeting the faithfulness of the Jubilarians.

“What has guided my life, given me an Orientation? To what am I called today? What are the promises to come?

“To serve the Lord is a choice. It is totally binding from our relationship to Christ. Do we have faith? It is a gift from God.” 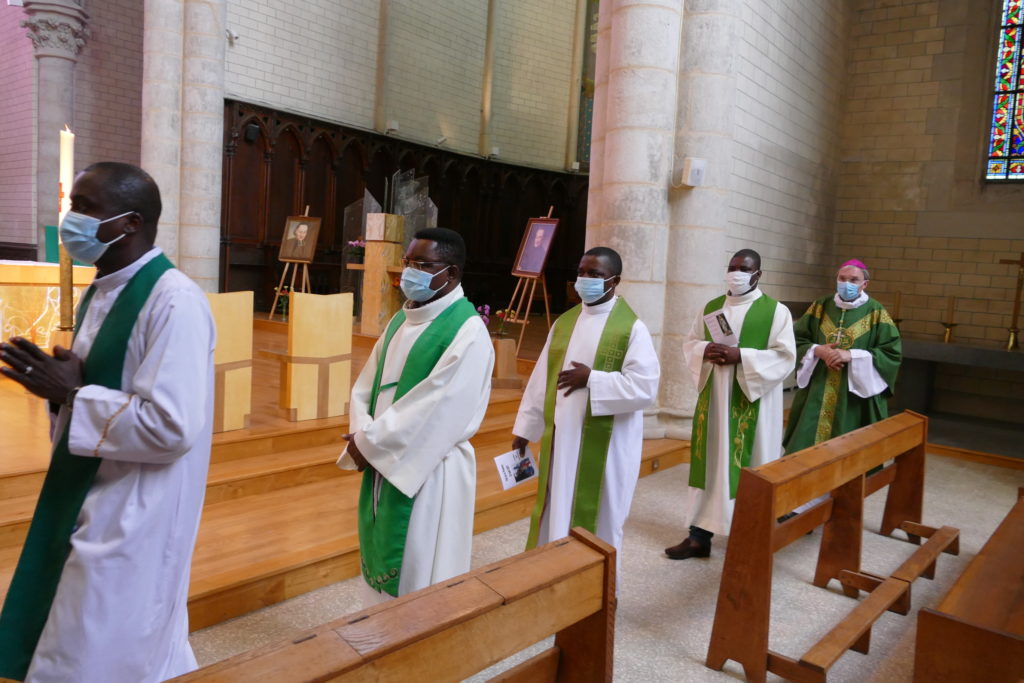 4 priests concelebrated with Bishop Dognin, Bishop of Quimper, from where the Bros Jean-Yves Hamon and Jean-Yves Mingant work. 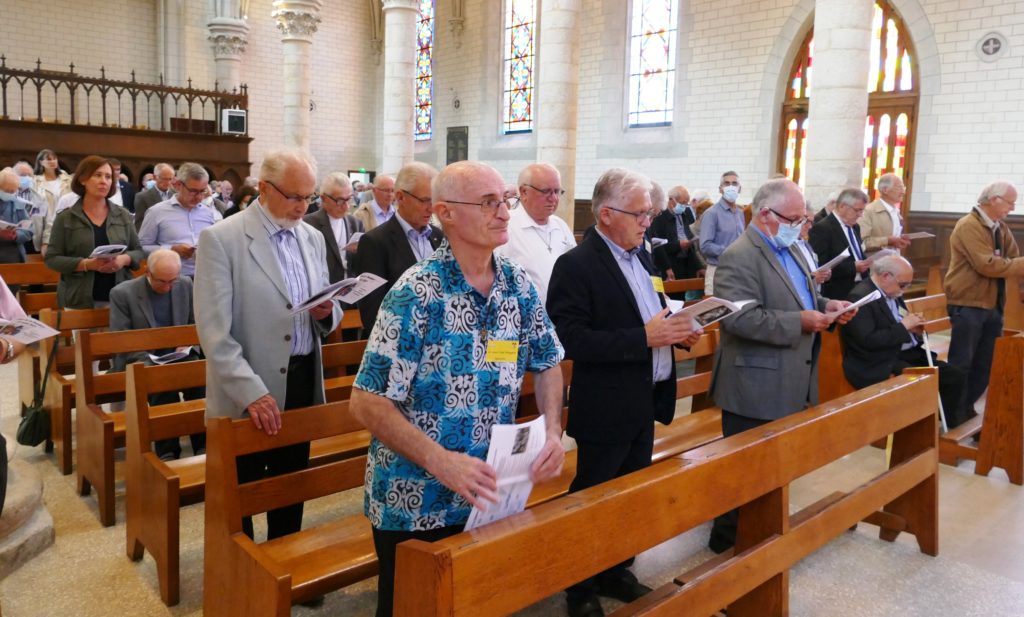 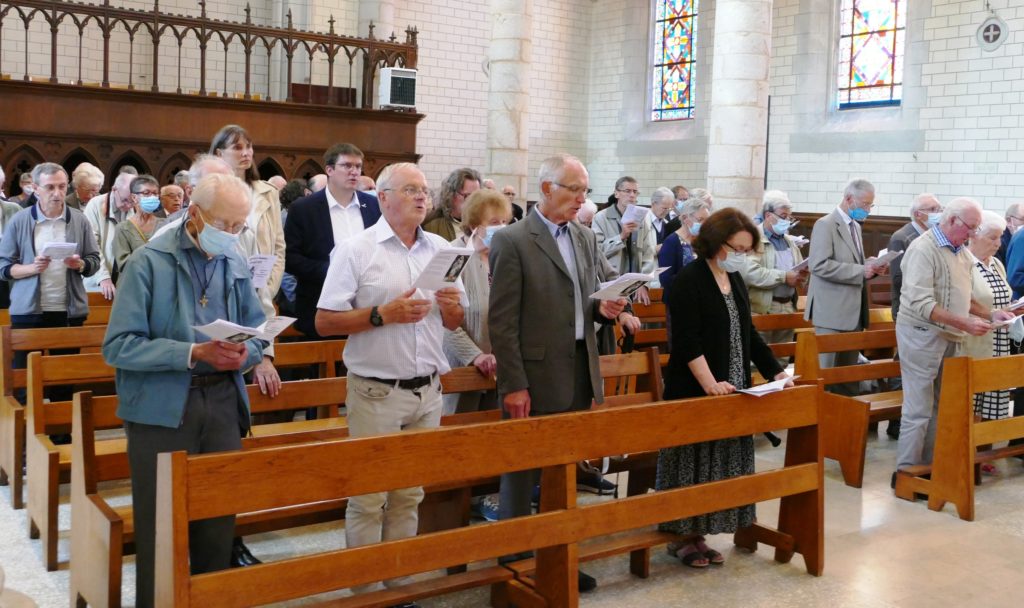 Do we surrender ourselves in faithfulness to the Lord?

Do we accept the signs of Christ?

What are the good fights to fight today?

The more united we are to Christ, the more we place ourselves at the service of others”. 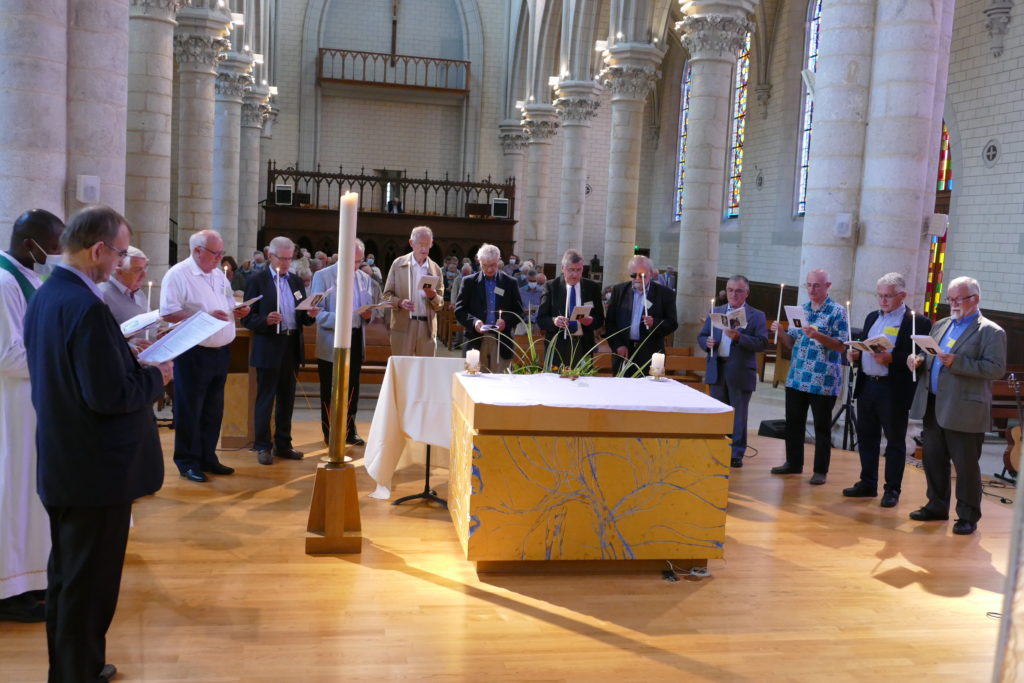 The Brothers Jubilarians renewed their vows.

16 Jubilarian Brothers marked their 50, 60 and 75 years of Religious life and were surrounded and celebrated as it should be! 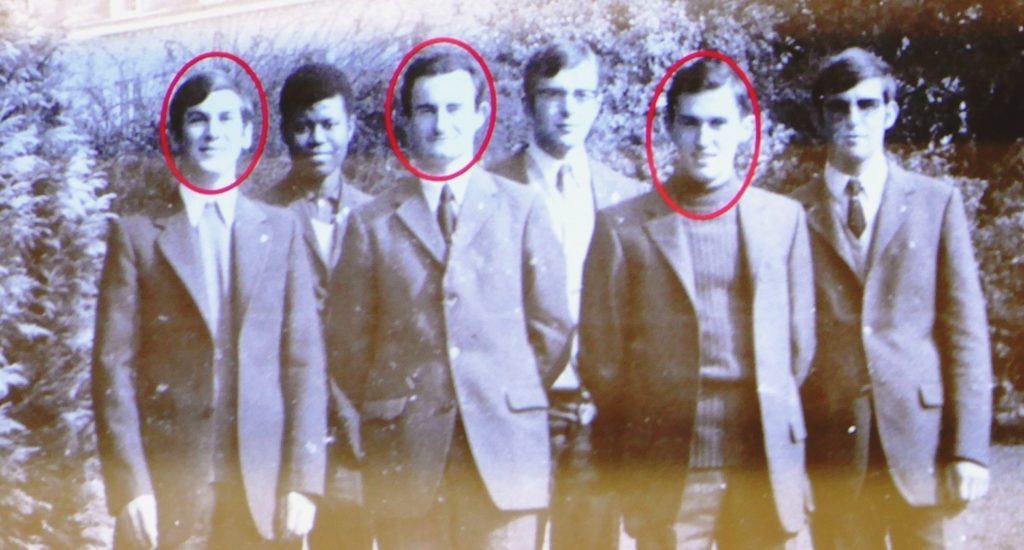 Find out who is who… 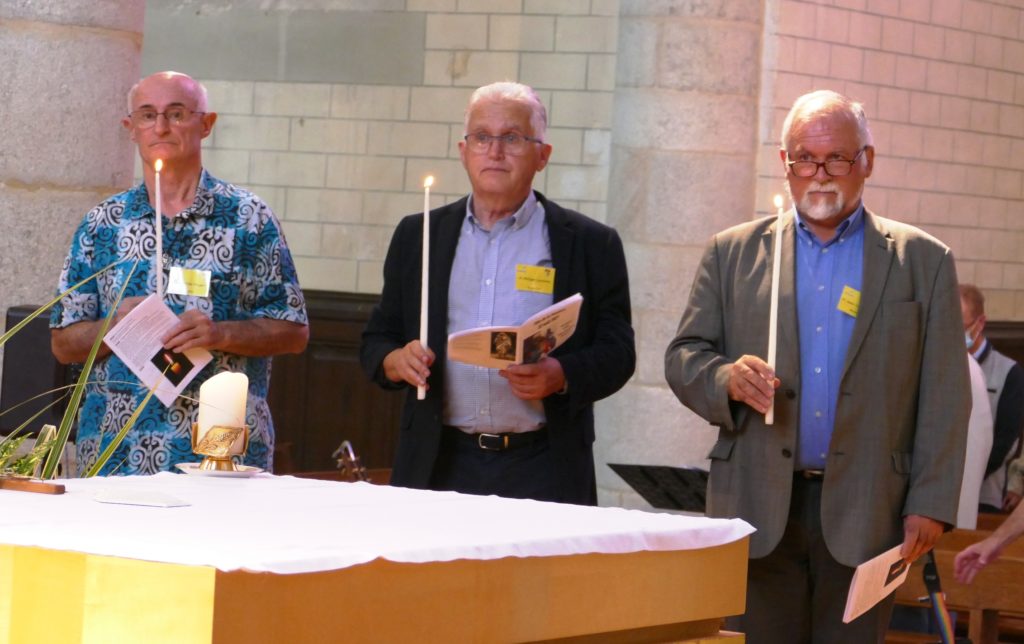 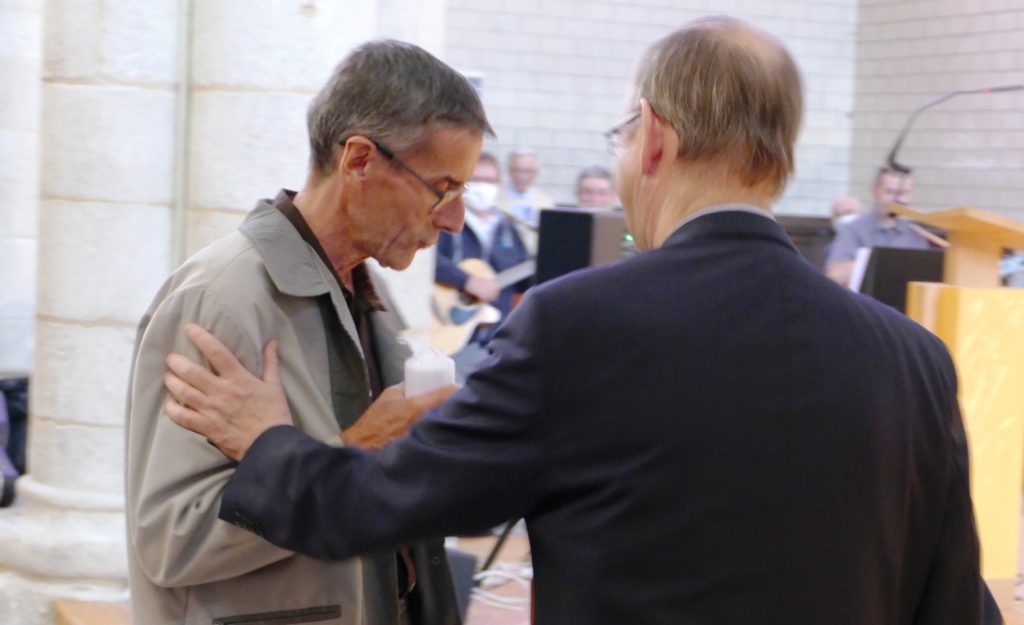 Bro Michel GOUGEON, – Director of the Scholasticate in Manila –was  absent last year at his Golden Jubilee of Religious life received the candle from the hands of  Brother Provincial.Provincial. 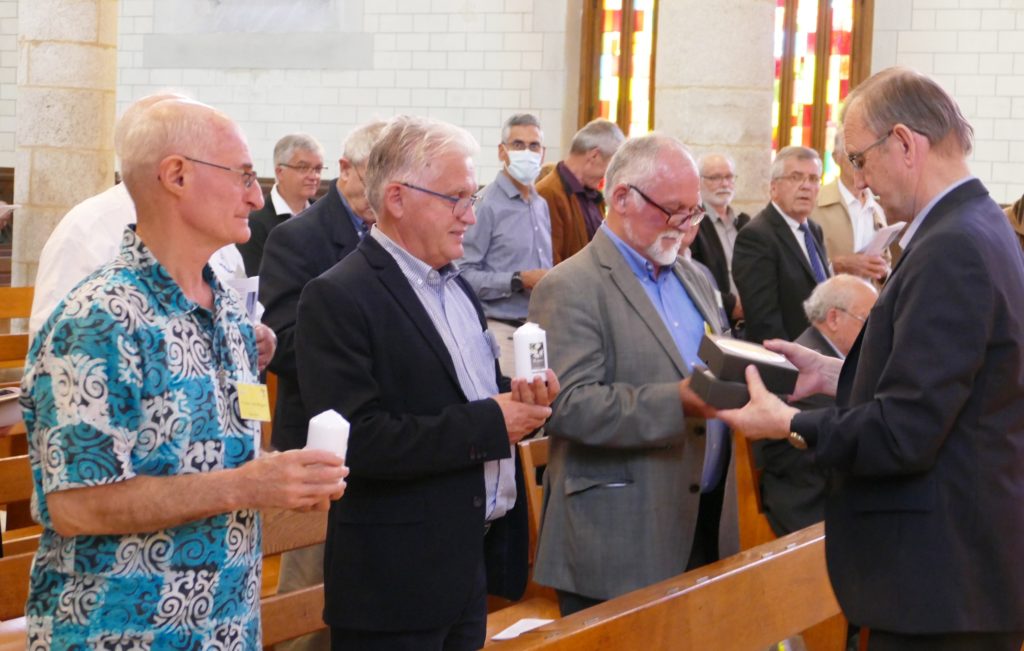 New in the services of the Province. Departures and Arrivals

Tutelle of Schools. Stability of the Tutelle team: no change in this new School year, explained Ronan Petton, General Secretary. On September 12th,  will be the Official launching of the 12 Commissions to Animate the La Mennais France Network. 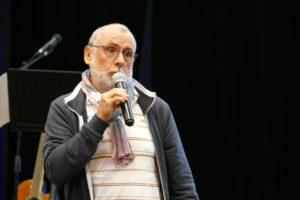 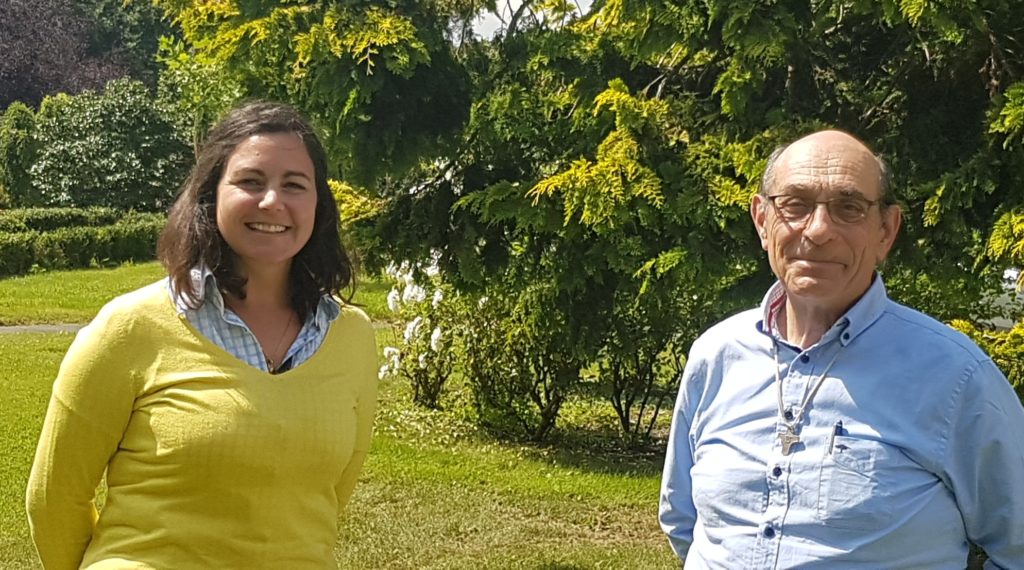 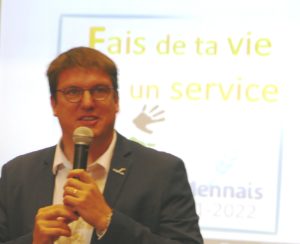 Projects are also underway with Young Professionals. New: To focus on the opening of two «Escales» for the reception of young people who need help with their homeworks and prevention of School dropouts in Landerneau and St-Malo. At the Centre of the Palandrin in Pénestin, Laetitia Mitaillé was appointed as Manager to replace Mathieu Bellay at Pénestin.

Lay Mennaisians Associates – LMA. The team of 12 Lay Associates has been following their itinerary for the past 10 years at 3 Annual Meetings of Renewal. A discernment is underway to decide Orientations explained Françoise Le Breton, LMA, and delegate to the International Commission of the Mennaisian Family. New this year: the LMA will renew their Commitment in their Local Communities. 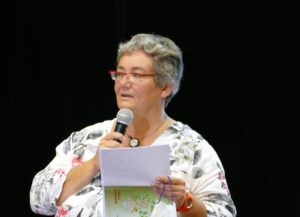 Province. The relocation of the Provincial House from Vannes to the Mother House continues actively: more than 350 cases of Archives were left and it is not over. Bro Philippe Lecointre ceased his service as Provincial Secretary and Bro Jean-Yves Hamon succeeded him by retaining his other Missions. 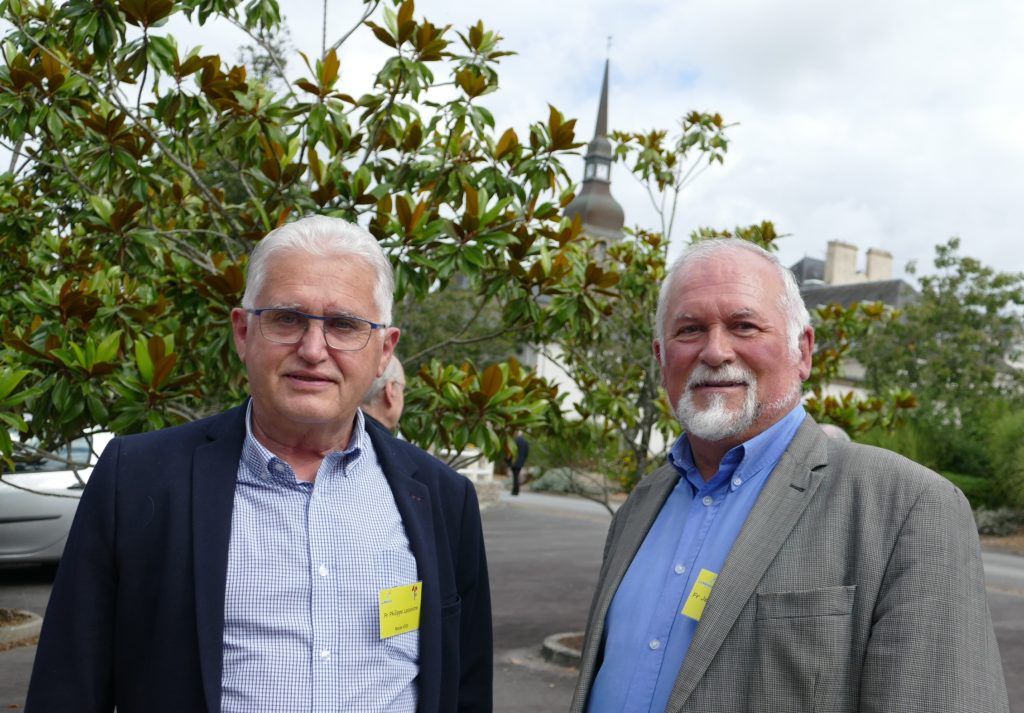 Mother House. Bro Bernard Bourigault ceased his service as Head of Reception at the Mother House. In mid-September, he will join the Community of Derval. Pierre-Jean Bar will succeed him. 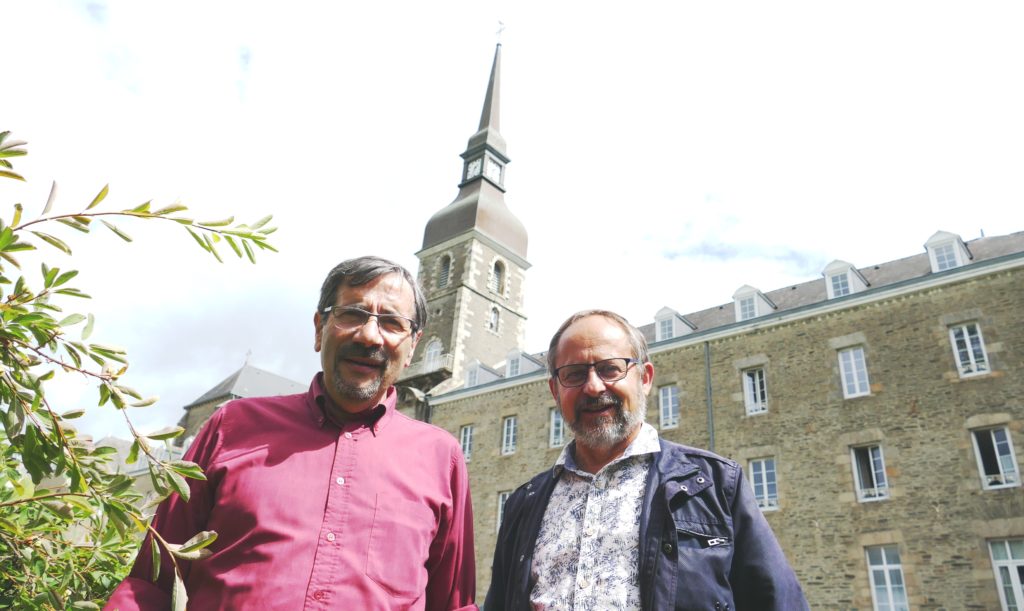 Bro Bernard – left – passing the witness to Pierre-Jean Bar for the reception at the Mother House.

Sophie Péron left the Provincial Bursar team after three years of service. Didier Manzi will replace her as an Accountant for the Province and for the reception of the Mother House. 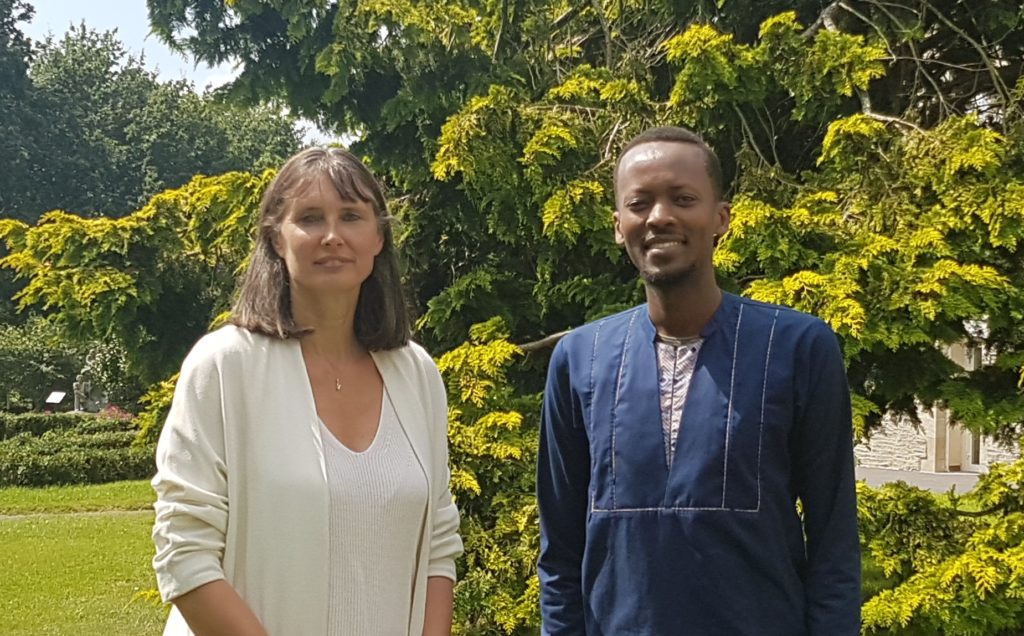 Didier Manzi will replace Sophie Péron as an Accountant for the Province and for the reception of the Mother House. 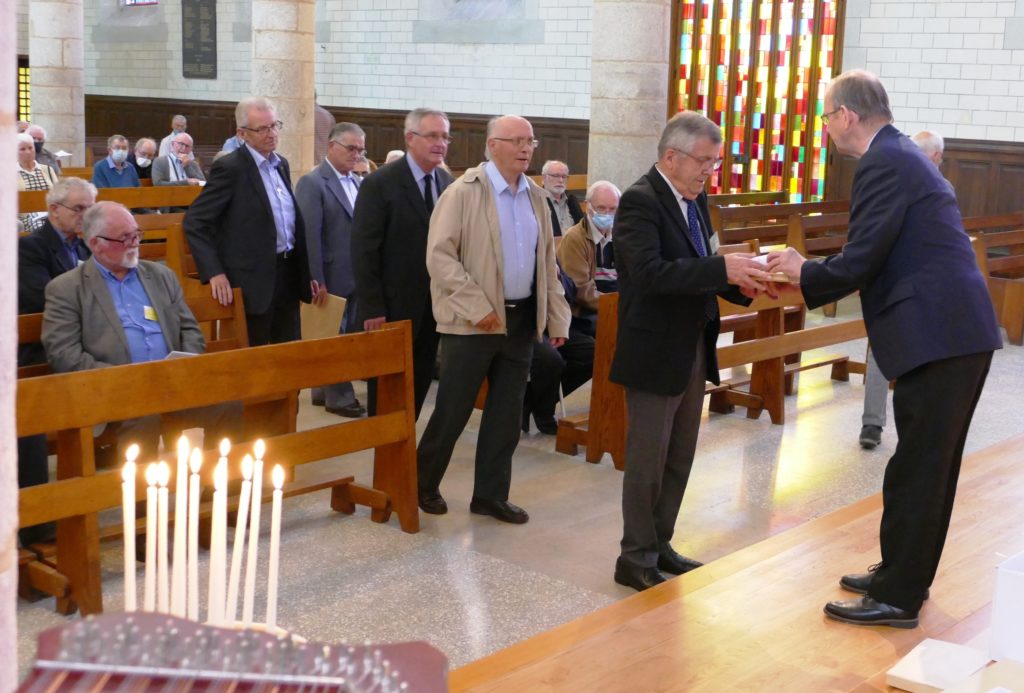 The Communities Brothers Superiors received the documents for the New Year in order to spread them and make them good honey of them!

A Gabriel Deshayes album. 5 Congregations having a close link with Gabriel Deshayes joined their energy thanks to the action of the Association Gabriel Deshayes to realize an Album on the co-founder of the Brothers of Christian Instruction, FIC. “It is the result from a Meeting in heaven between the two founders and Bro François Jaffré!” commented with humour Bro Claude Launay, Secretary of the Association. The album is broadcast today to the Communities and will be the subject of a presentation during the Christmas session of the Brothers. 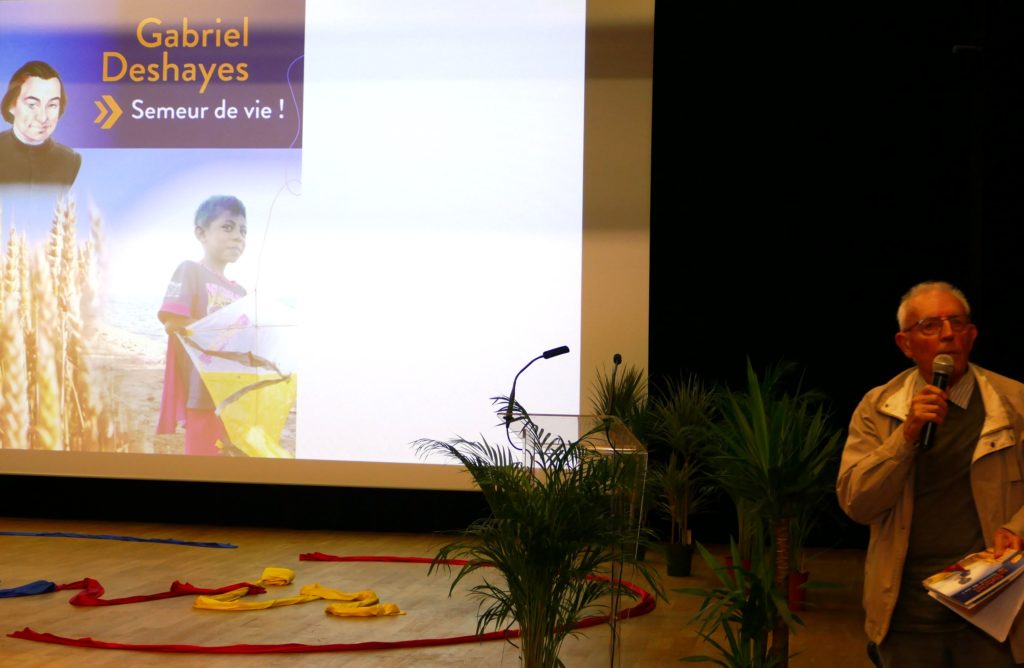 The Brothers have left England

Tribute was paid to the Brothers presence for 100 years in the British Territory. After discerning the realities, the Community of Liverpool was closed this summer and the Brothers joined several Communities of France: Bro Francis Patterson in Ciboure, Bro James Hayes in Châteaulin, Bro Jack Davis in Josselin, Bro Jacques Jouvance in Redon. 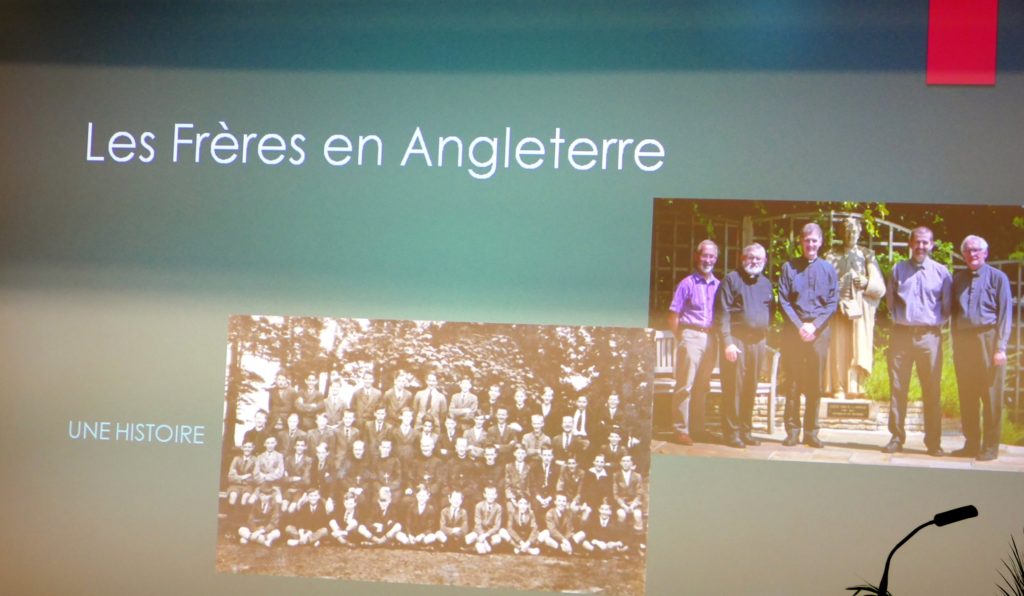 We will have the opportunity to make a presentation of the History of the Century of the Brothers in England within a few weeks.

However, the Brothers keep the Tutelle of SFX College in Liverpool and of  Southampton Primary School.