The whole Province of Saint-Louis de Gonzague of Haiti is celebrating, “in Mennaisian Family mode”, this Saturday, 24th October, around the Brothers Ony DESRIVIERES, Michel-Ange DURÉ and Frantz Caleb MUSEAU who pronounced their perpetual vows in the congregation of the Brothers of Christian Instruction. More than a hundred young people were present, the Brothers also of course, many lay people, families and other congregations. Cardinal Chibly LANGLOIS, Bishop of Les Cayes, presided over the ceremony. He situated the event within the framework of the Bicentennial of the Congregation, which was to close in our Province that same 24th October. It was Bro Géniaud LAUTURE, Provincial, who received the Vows of the three Brothers. Here is an account of this symbolic event with multiple testimonies. 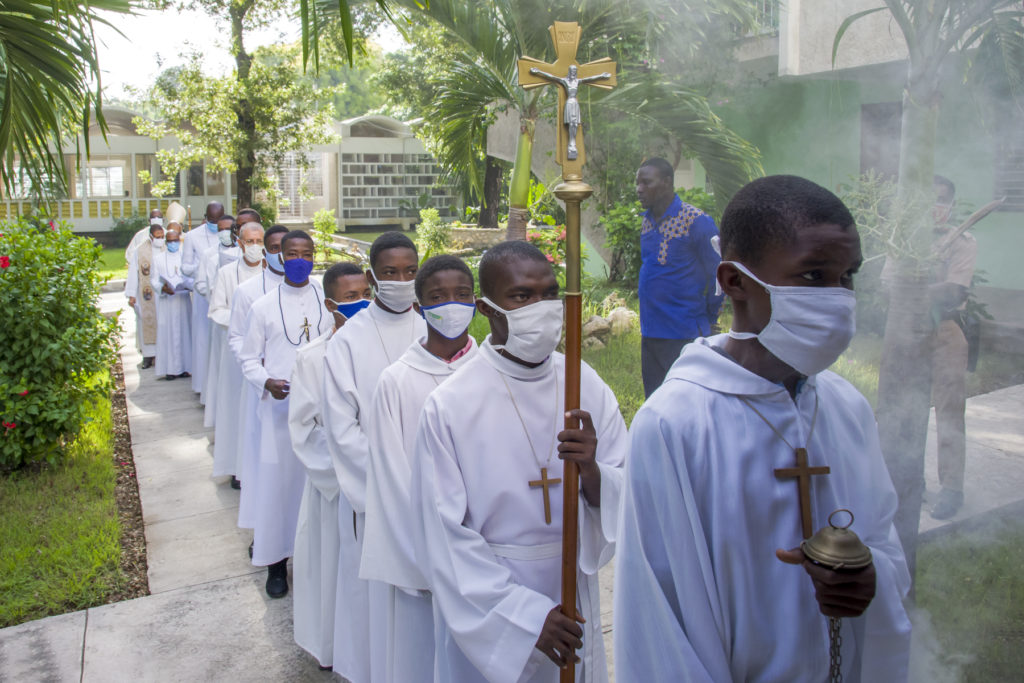 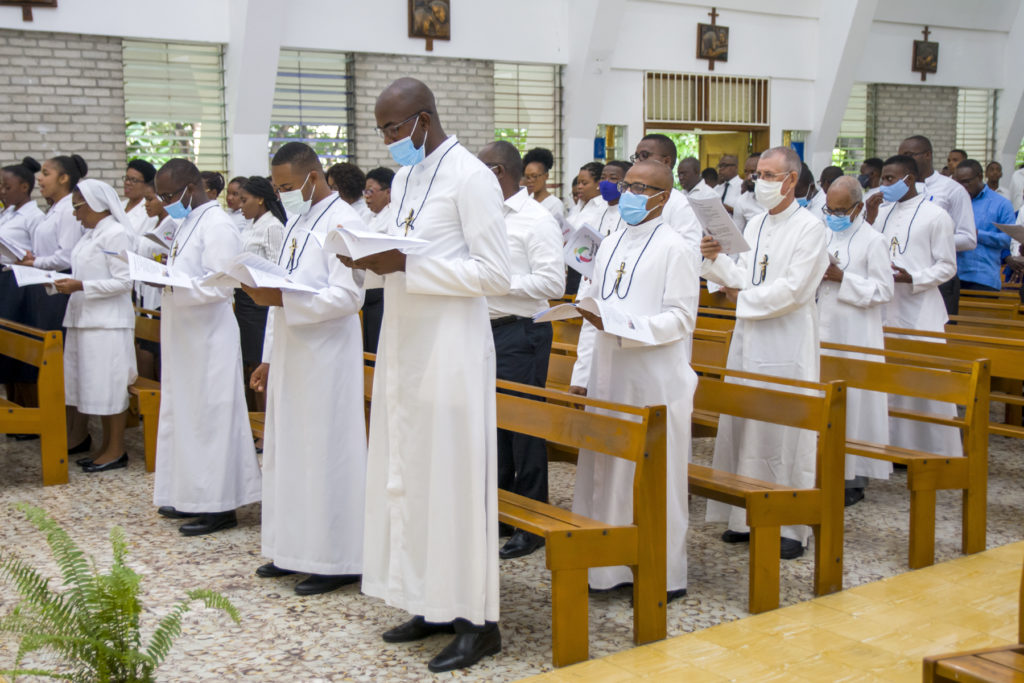 The three future professed, in the front row.

The message of Cardinal Langlois’ homily is clear and touches all the fringes of the beautiful assembly gathered on this happy occasion. 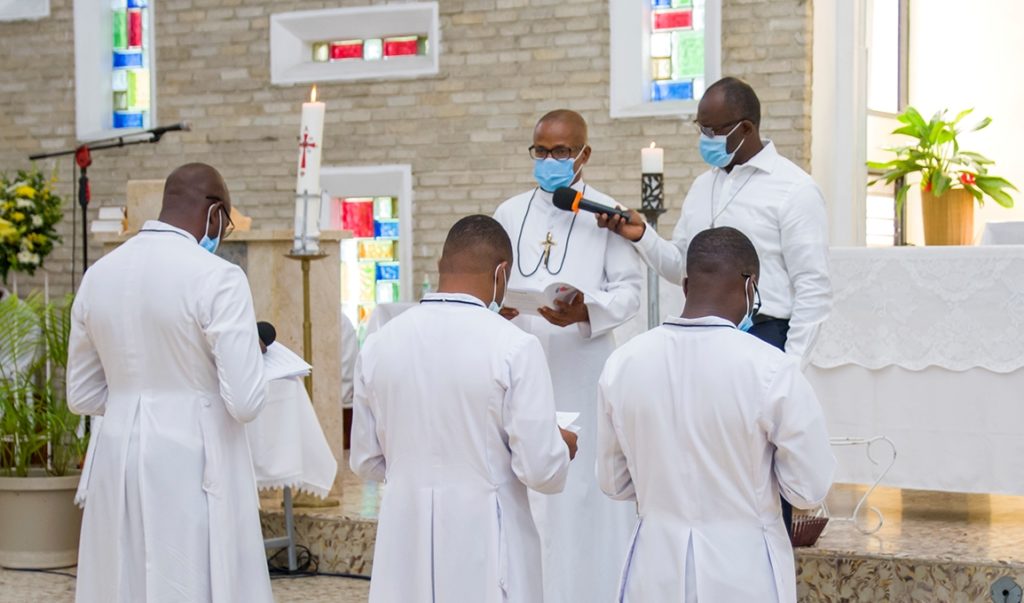 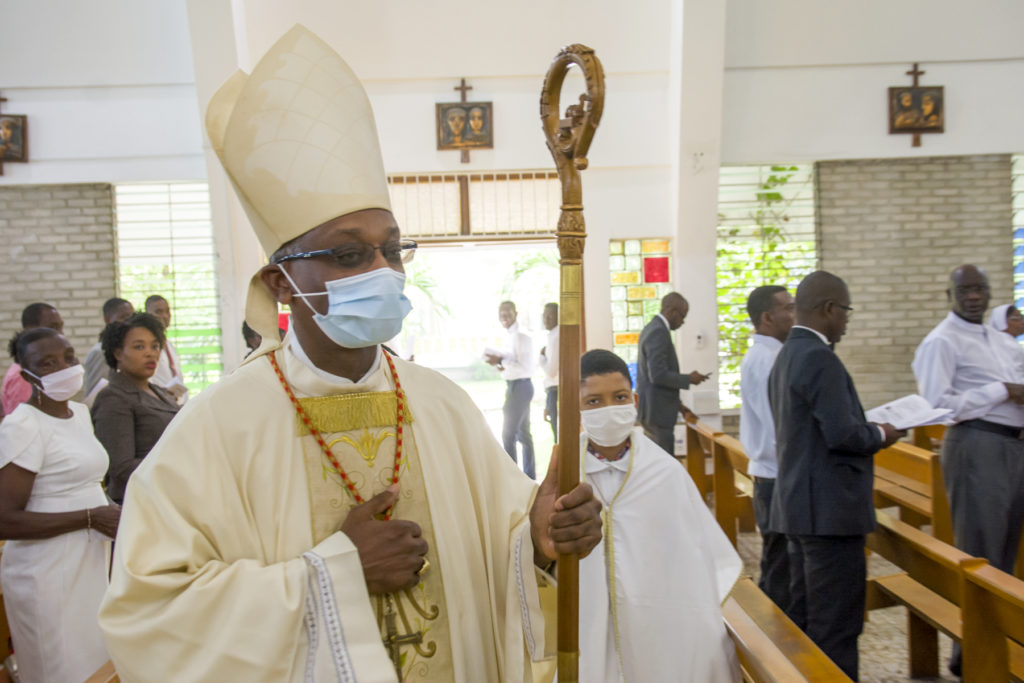 He invites the professed to a total gift of their whole person to God and to humility in fraternal communion:

“You therefore receive this grace [of consecration] to serve everyone, especially children and young people, in humility, simplicity and forgetfulness. This commitment directs you to the mission of the community: to become servants of children and young people, together with the members of the community, to have a compassionate heart for human suffering ….

Such a mission requires a lifestyle, in the sense that your life no longer belongs to you. In other words, you cannot and must not live alone, you are with Christ, you are with the Brothers.” 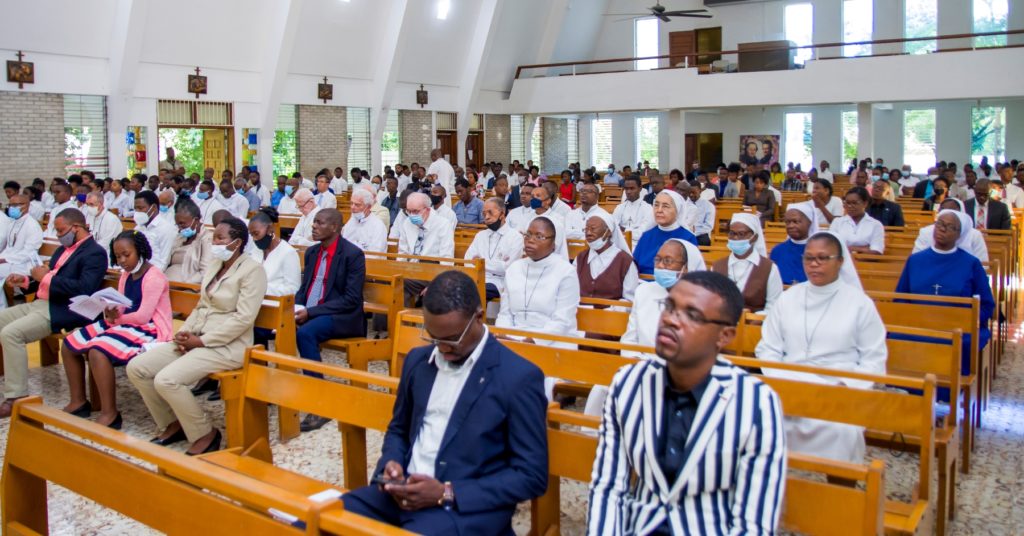 He thanks the parents for having consented to give one of their sons to God at the service of the Church:

“Dear parents of the Professed, with the FIC Brothers, I thank you for this gift made to the Church. The final commitment of your sons is a source of blessings for you. Far from considering yourselves losers, consider yourselves as great beneficiaries a hundredfold … Any donation made to the Lord in confidence becomes an inexhaustible treasure which returns in favour of the one who made it … “ 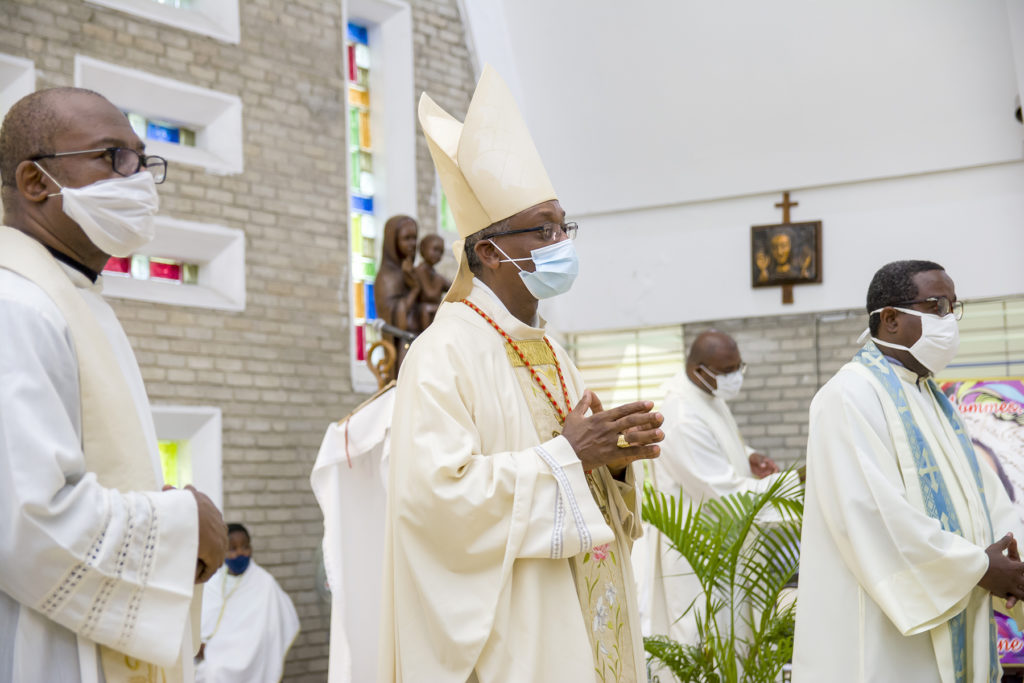 He urges the hundred or so young people present at the ceremony to open their hearts to accept God’s call in their lives and to respond generously to it:

“It is beautiful when someone can trust in God and his Church to the point of giving himself totally to the service of God, to the service of his brothers and sisters, to the glory of God and the salvation of the world…. Dear young people, you who are present at this celebration, if you hear the voice of the Lord, do not close your hearts, respond generously to his call…” 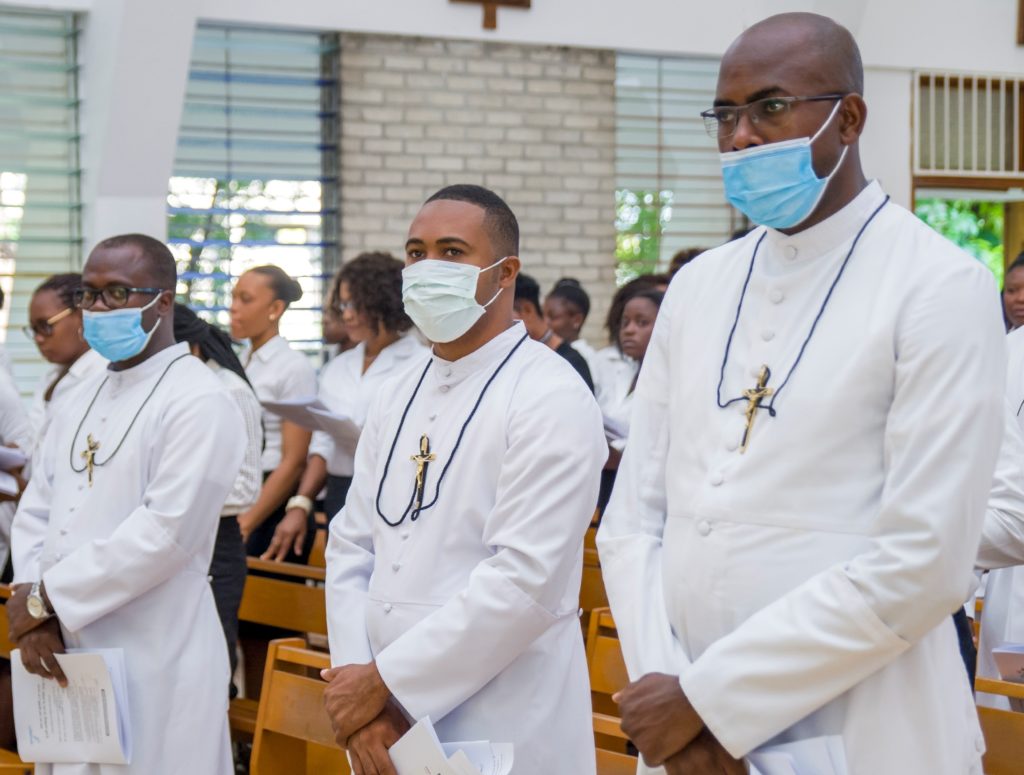 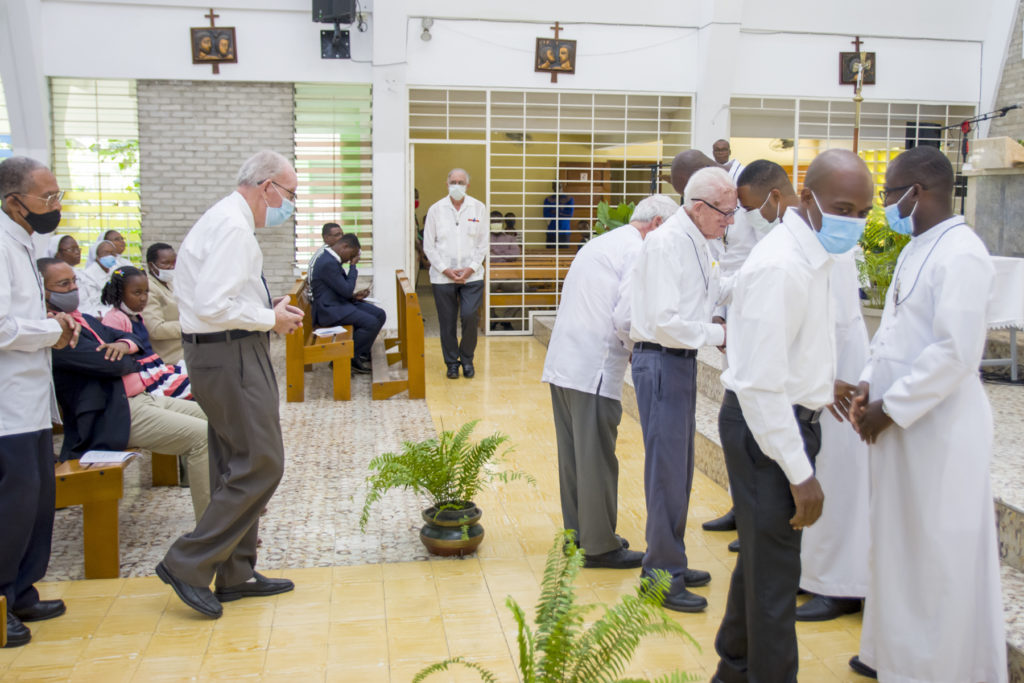 Fraternal embrace with each of the Brothers and with the families, after the vows. 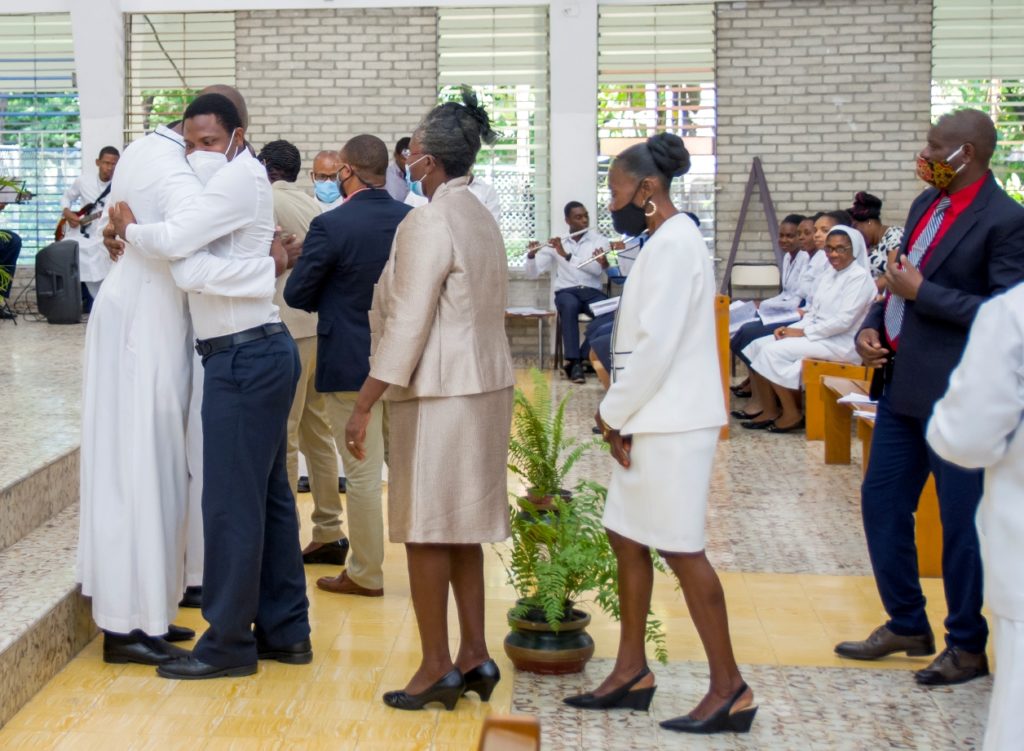 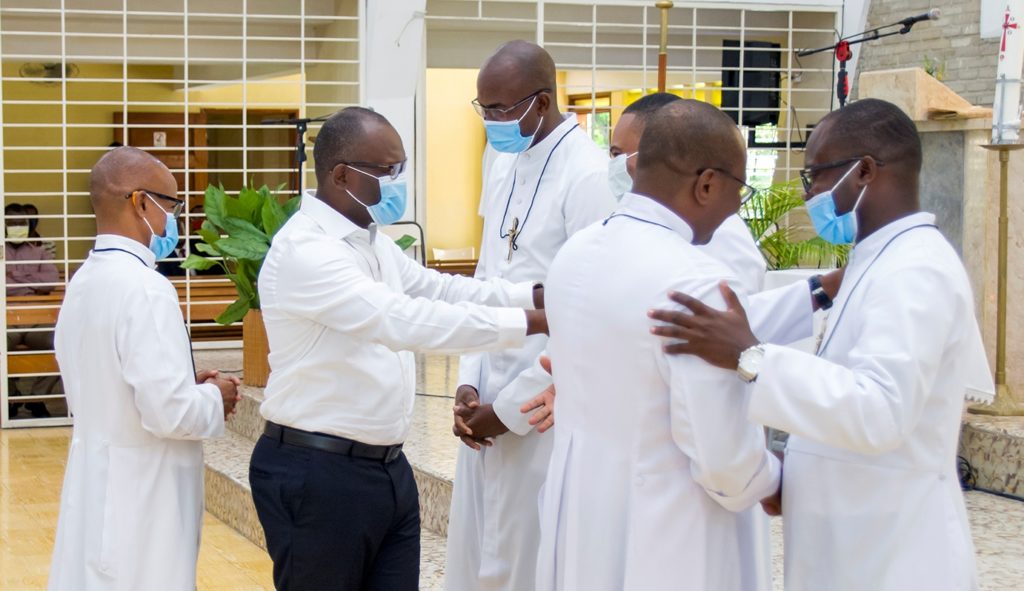 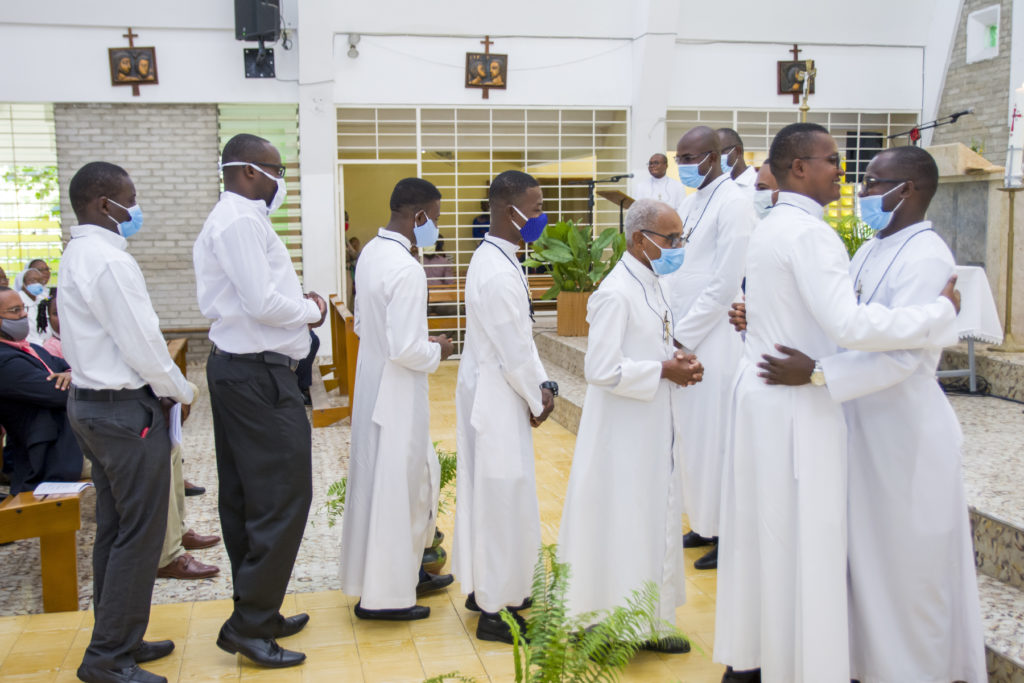 They give us their impressions: 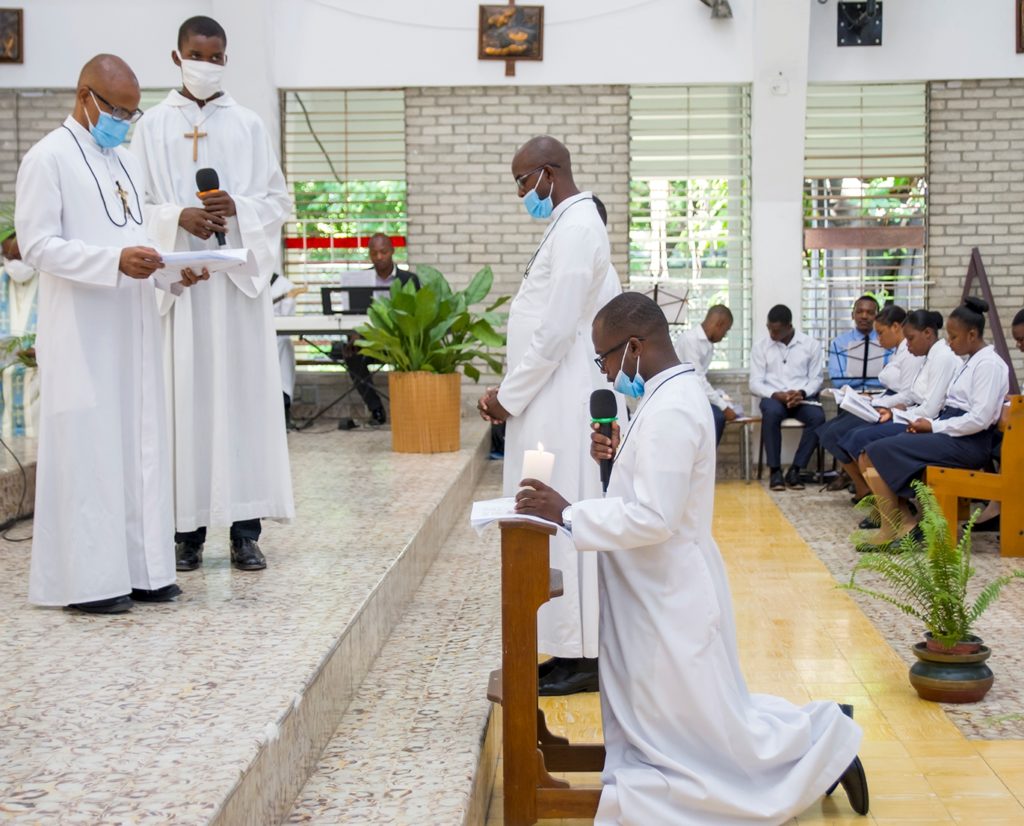 “This day of 24th October, I am definitively committed to the Congregation of the Brothers of Christian Instruction. It is a day of joy and celebration for me. This important event is especially important because of the quality of the Eucharistic celebration, where everything has been meticulously prepared. The moment of conviviality that at the end gathered around the same table Families, friends and all the confreres present in the Province leaves me indelible memories. The Lord has done wonders for me, holy is His name!” 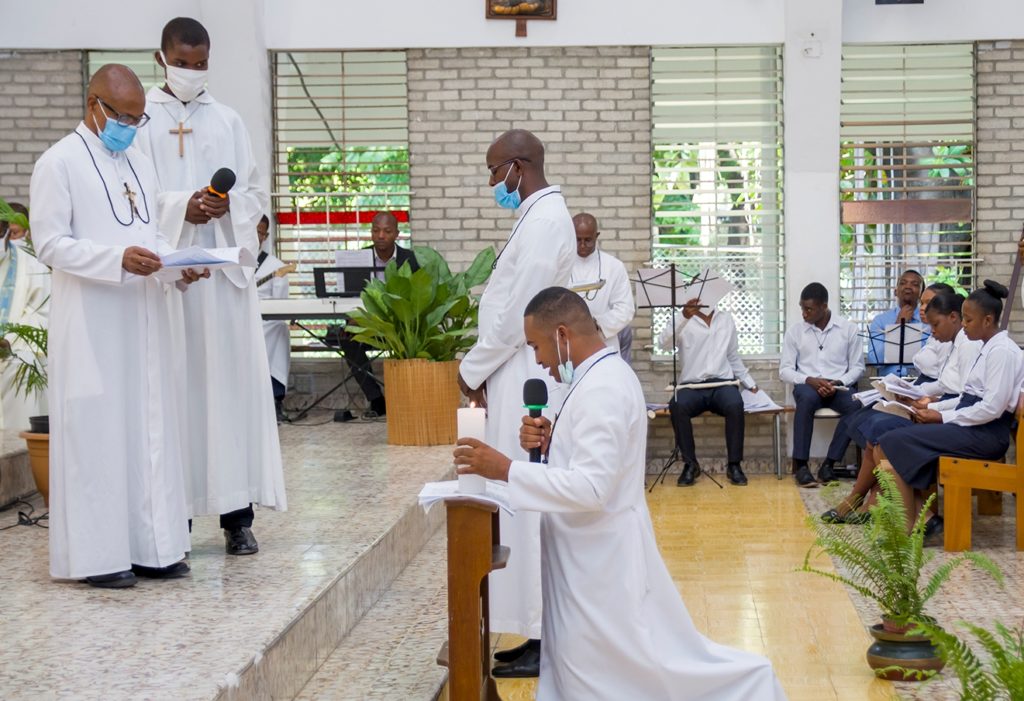 The 24th October, 2020 is now an unforgettable date for me, because it is the day when I became fully involved in the Congregation of the Brothers of Christian Instruction at the service of the One who called me. This long-awaited day has finally arrived! What an immense joy for me, for my family, for my colleagues, my friends and for all those who supported and accompanied me! ‘All is grace,’ St Paul tells us.

I am proud to admire the preparations that have been made to make this day exceptional. Obviously this is not the end of the tunnel, the work continues. That is why I always count on the prayers of everyone so that I may always be animated by the same joy of instructing, educating and evangelising children and young people following our founders Jean-Marie de la MENNAIS and Gabriel DESHAYES.” Brother Michel-Ange DURÉ 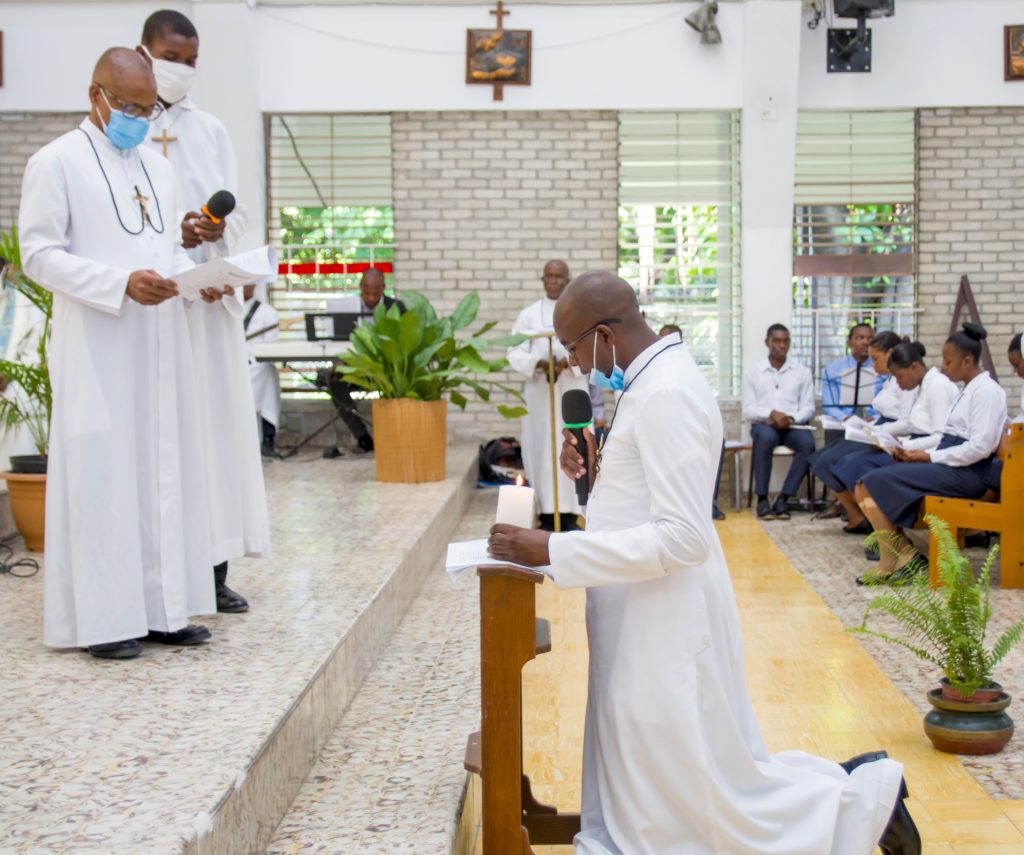 “I am truly in joy, the joy of totally offering my life to the Lord and feel welcomed by him in return. Throughout the celebration, I really had my heart set on fire. This feeling of having made the right choice is a constant part of me. I am pleased to see how much my brothers show me their fraternal charity on a daily basis, and especially in the way they surround me during the ceremony of my perpetual profession: I felt that I was carried in my choice by the whole community, family and friends. Now I can only cry out loud and clear: I want to sing You all my life. My God, I will sing to You as long as I live” (Ps 104). “I will speak of your countless wonders, and I will rejoice and dance with joy” (Ps 9). Amen!”

Brother Jean-Pierre LE REST, new missionary who has just arrived in the Province, one month ago, is also very impressed by the dynamism of the Province and all the hope embodied by a ceremony such as that of 24th October or the vocations camp that has just brought together fifteen young people at the Juniorate. Let us give him the floor:

“I would like to highlight two events that touched me. The first is the celebration of the definitive commitment in the Congregation of Brothers Caleb, Michel-Ange and Ony on the 24th October. The ceremony had been prepared down to the smallest detail and it took place in a sumptuous manner. Several choirs and a fine orchestra had united, on the initiative of Brother Milo, to support the singing of the assembly in an admirable way. Personally, I was struck by the voices of two singers who, they know, by the beauty and depth of their interpretation lead the soul to God. 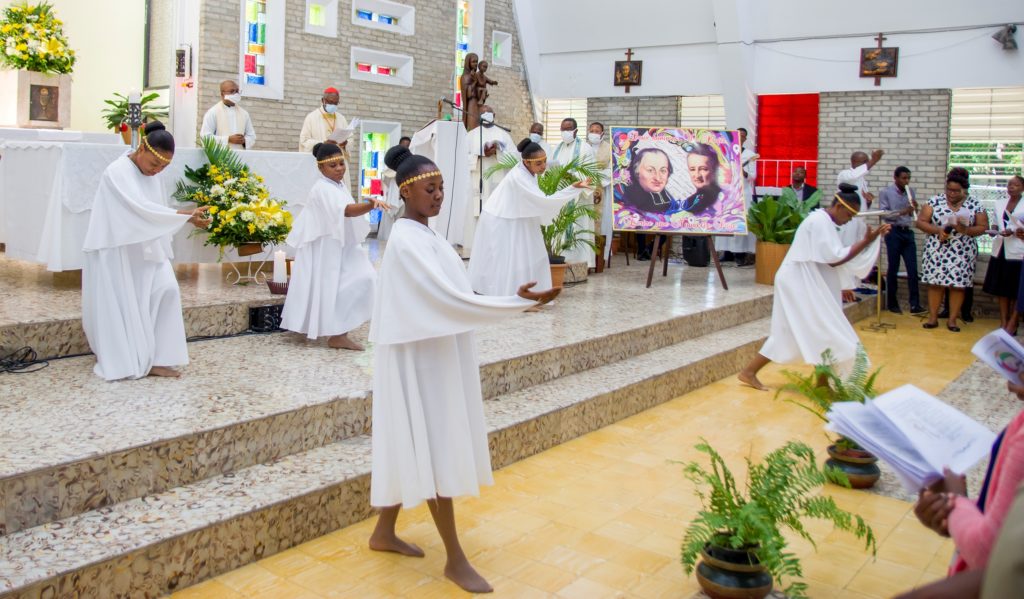 Finally, how can we forget the dance performed by the Postulants of the Sisters of Charity of Saint Louis on the Magnificat? Tonic and joyful, as Mary must have been! As for the message transmitted by Cardinal Chibly LANGLOIS, Bishop of Les Cayes, he certainly talked to the professed but also to all of us. In essence, he told us, “We do not own our mission; we will be signs in this world only to the extent that there is consistency between our actions and our words; we will never lose anything to trust in God.”

The second event that I want to relate is the vocations camp that just ended at the Juniorate of Petionville and which brought together 15 young people from Port-au-Prince, Cape Town, Les Cayes and La Vallée. It is not indifferent that young people who have for the most part just passed their baccalaureate accept to devote practically a week to discerning what God expects of them, this during days full of times of prayer and teaching. I had the opportunity to speak to them twice. What they learned from what I was able to say to them: “All that is not given is lost.” May they always make their choice and live with such conviction! Let us also emphasise that if these young people were there, it was because they had been in contact with Brothers who carry a special concern for vocations!”

Such an event cannot leave the young people who took part indifferent.

A senior student of the Institution Saint-Louis de Gonzague and a young musician who accompanied the choir, also give us their impressions after having lived this ceremony of perpetual profession:

This Saturday, 24th October, from a quarter to nine, is the ceremony of perpetual profession of 3 Brothers of Christian Instruction. I’m lucky to be a part of it. I notice a very ordinary beginning of Mass, until the entrance in procession of the three professed, some of their confreres, acolytes and the Cardinal Langlois, who gives this ceremony a very special allure.

In front of their parents, friends and an entire assembly composed mainly of young people, we attend this magnificent liturgy during which three Brothers offer their life to God for the education of young people forever. One feels the excitement hidden behind the luminous smile of these Brothers.

What I am most impressed by is the fact that their parents go up to the altar with them to sign their commitment. This proves that these young adults are carried as the child Jesus, to a merciful God who grants them his benevolence and blessing to undertake a mission of the most indispensable. 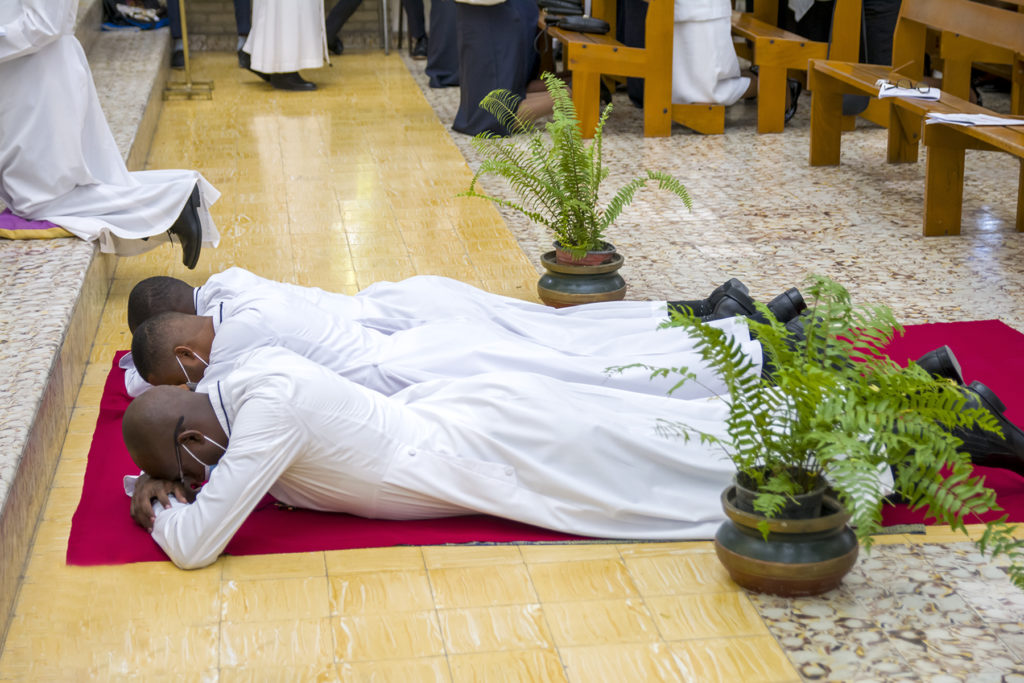 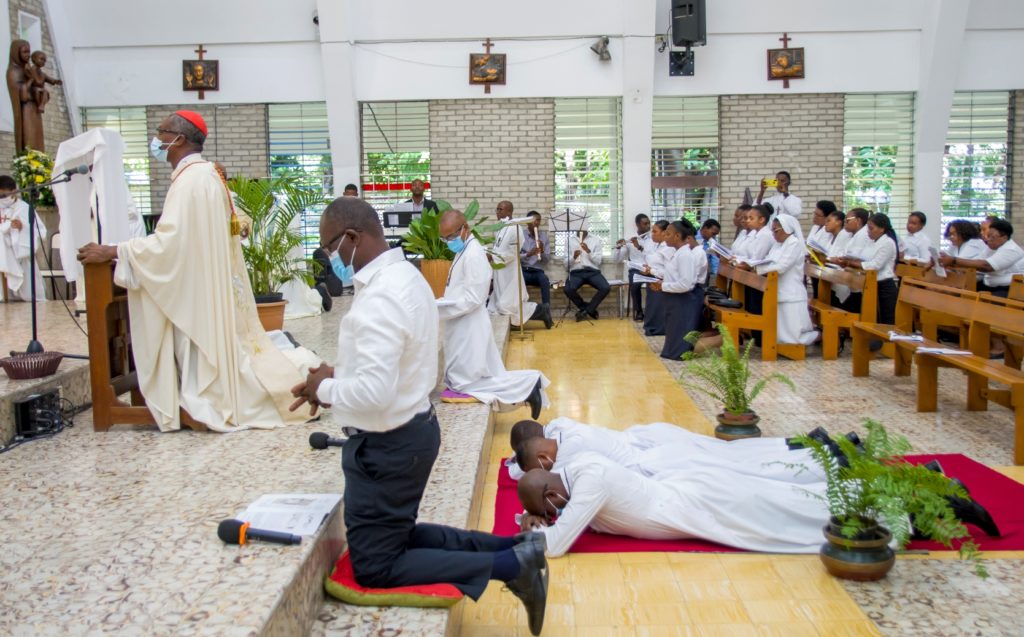 That they prostrated before our Father during the song of the litany of the Saints is also a strong and striking gesture for me. The consecration of these Brothers is all that a young person like me needs today to find impressive role models.” Fabien AUBOURG

I am Daniel RICHARD, Flutist and Clarinetist. I met Brother Milo on a Sunday at the Chapel of the Institution Saint-Louis de Gonzague, after having accompanied the choir Effata, which in general animates the Mass of the 4th Sunday of the month. That day, after the celebration, Brother Milo came to congratulate us and took the opportunity to tell me that he plays the flute as well. After this ‘introduction’ we exchanged our contact information… A few days later, Brother Milo told me about the celebration of perpetual vows scheduled for 24th October where some members of the different choirs as well as musicians frequent the Chapel were invited. So the invitation was made to me and I gladly agreed. 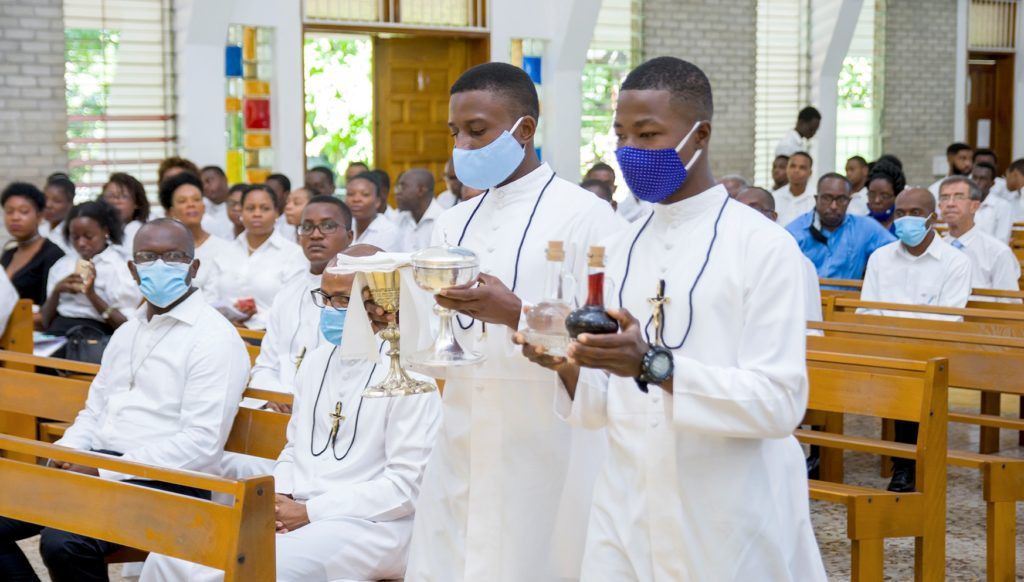 I can say it was a great experience for me and a great celebration. I had the opportunity to meet and play with other flutists including Frandy and other musicians, Brothers among others. I was able to see that musical training seems to be part of the religious life of the FIC… ”

All is grace! Let us continue to accompany our three Brothers in our prayer and fraternal support.

May the young people who will soon join the postulate follow in their footsteps and follow their example of the total gift of their whole person to the Lord! Magnificat!