The assembly in Saint Guillaume Chapel, in the town center of St Brieuc.

A soft and bright morning at Saint Brieuc on this  6th June , 2019. A morning to make memory of a bet, a challenge, a madness.

On this 6th June, 1819, Gabriel Deshayes and Jean-Marie de la Mennais united their energy in this “Treaty of union”, celebrating their friendship, their brotherhood, their Alliance. The objective? To save children by means of education. 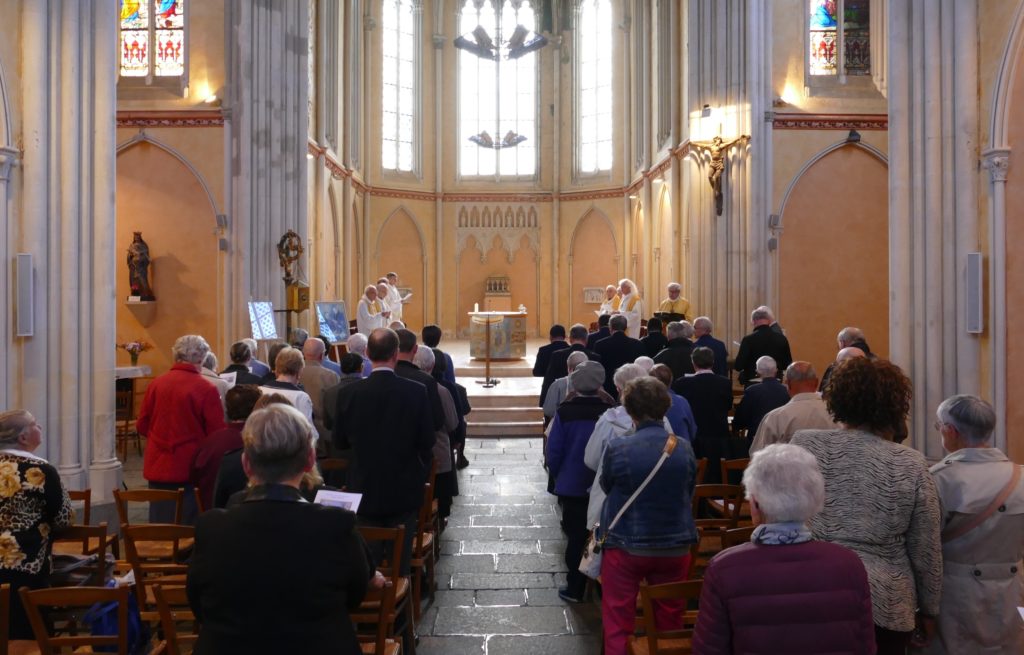 200 years later, the General Council of the Brothers marked this founding act during the celebration at Saint Brieuc, in Saint Guillaume Chapel. The Priests of the Cathedral Chapter chaired by Father Jean Hamon wanted to be united with the Congregation  in this anniversary, as well as the Sisters of Providence of Saint Brieuc and some of the other local Congregations. The Brothers of Saint Brieuc’s Community in connection with St John the Baptist Province assured in a dynamic way the organisation of this remembrance.

THE SPIRIT INVITES TO TAKE RISKS

“I made them know your name”: it was Jesus ‘desire to share the knowledge of his Father with his Apostles, Father Hamon commented in his homily. He knew their generosity and their fragilities.(…)Evangelisation has always been hard at all times. Jean Marie de la Mennais was very active and enterprising and at the heart of emergencies he focused on the education and formation of children and young people. Nothing is possible without the presence of the Spirit. 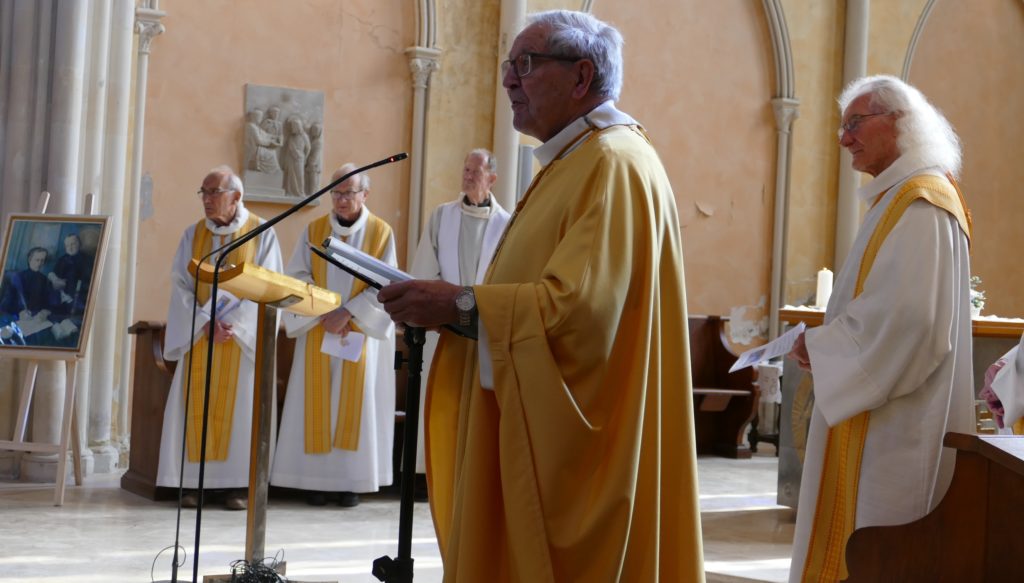 FatherJean Hamon and the priests of the Cathedral Chapter.

In two centuries your congregation has been jostled, it has learned to adapt and innovate. And this same Spirit invites us to take risks, from fear to daring, from credulity to faith, from individualism to fraternity. “ 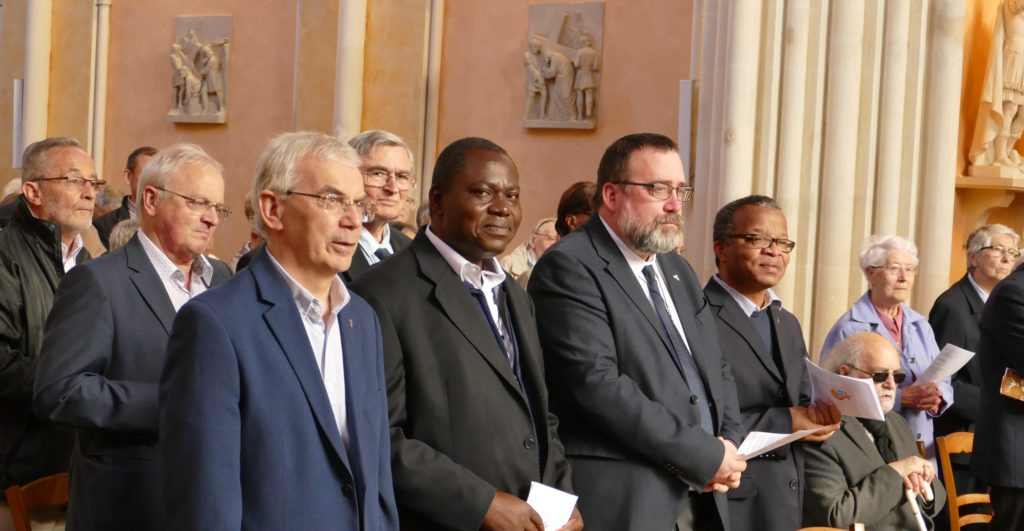 Here the 4 Brothers of the General Council of the Congregation.

THAT OUR FOUNDERS BLESS US!

For his part Rev.Bro. Hervé Zamor, Superior General of the Brothers of Christian Instruction gave thanks. “The little mustard seed thrown into the ground here in Saint-Brieuc by Jean-Marie de la Mennais and Gabriel Deshayes has become a big tree that has passed the test of time whose branches and roots continue to bear fruit in 26 countries on the 5 continents. 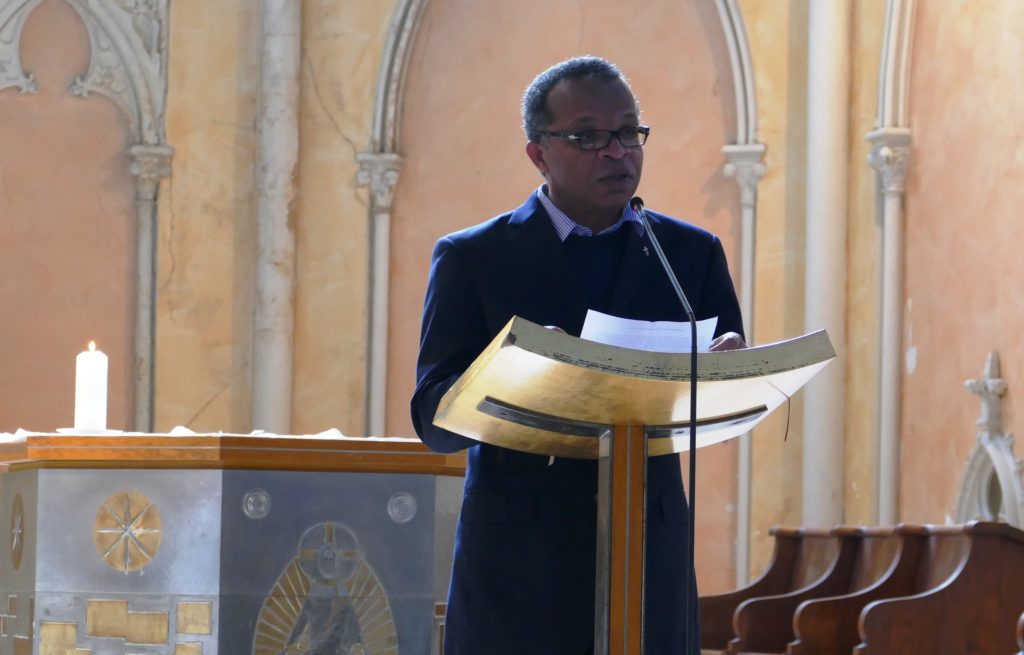 Bro Hervé Zamor : May ourFounders teach us to go off and risk everything!

Magnificent collaboration between Jean-Marie de la Mennais and Gabriel Deshayes. It remains for us today a source of inspiration that can give freshness and dynamism, daring and creativity, wisdom and vision to our apostolate. “ 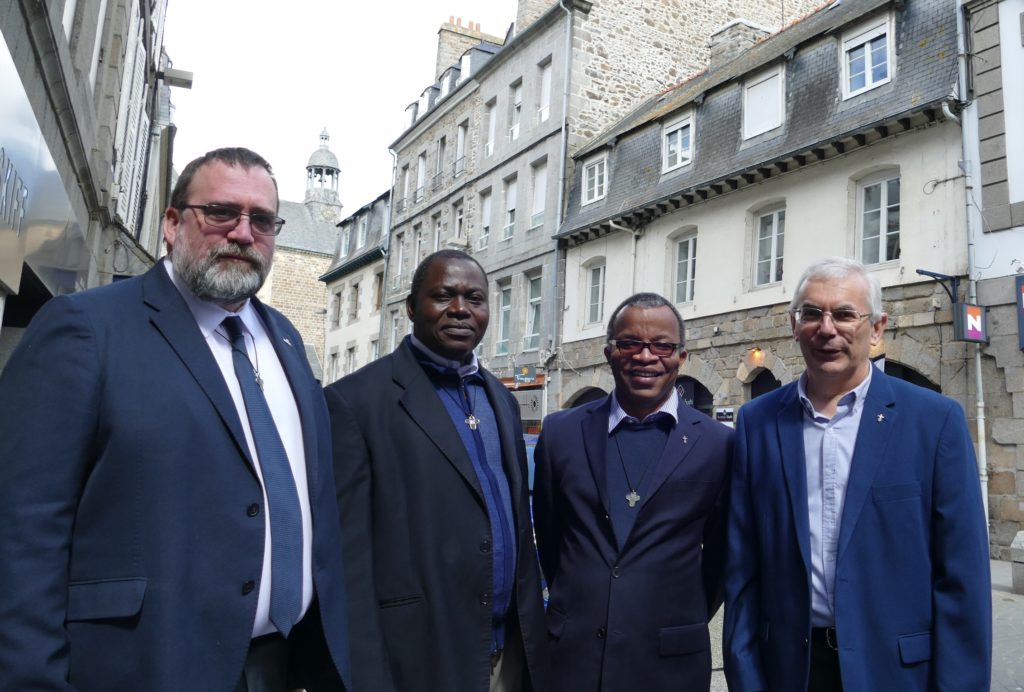 We ask our founders to bless us! May they instil in us their unshakeable confidence in Providence! May they transmit to us their passion for God alone and their tender affection for the Virgin Mary! May they teach us to go off and risk everything following Christ! “

A great opportunity to learn more about a reformer of ruins in the diocese of St-Brieuc. This is the goal of the exhibition inaugurated this Thursday, 6th June. 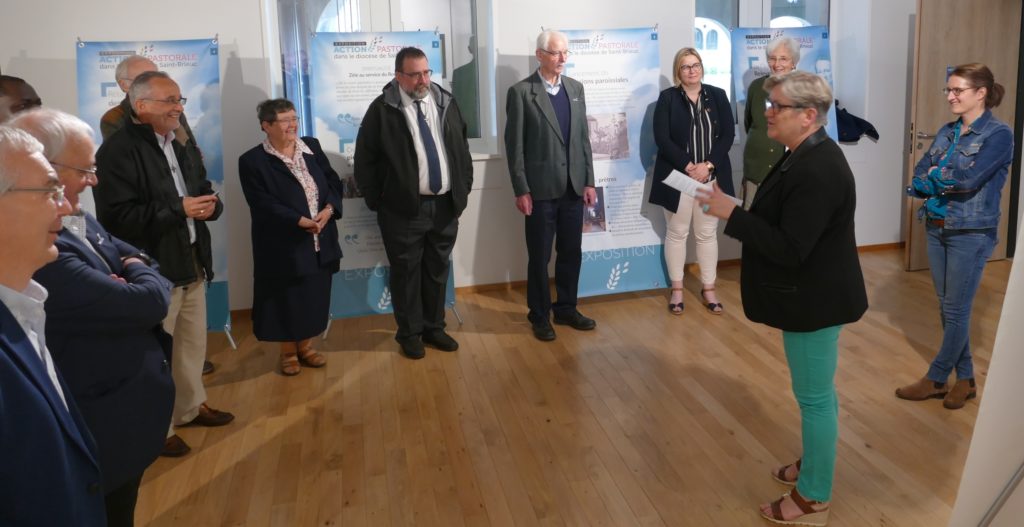 Sr Huguette Provost, Superior general of the Daughters of Providence, on the left – Brother Bob Léaustic, at the centre – and Odile Cherdo and Maud Hamaury, – on the right, the kingpins of this exhibition.

Odile Cherdo, person in-charge of the animation of St-Yves Diocesan House at Saint Brieuc and Bro Bob Léaustic, Superior of the Community of the Brothers at Saint Brieuc presented the work realised with the cooperation of Maud Hamoury, person in-charge of the Media Library at St-Yves diocesan Centre and of Sr Huguette Provost, Superior general of the Daughters of Providence 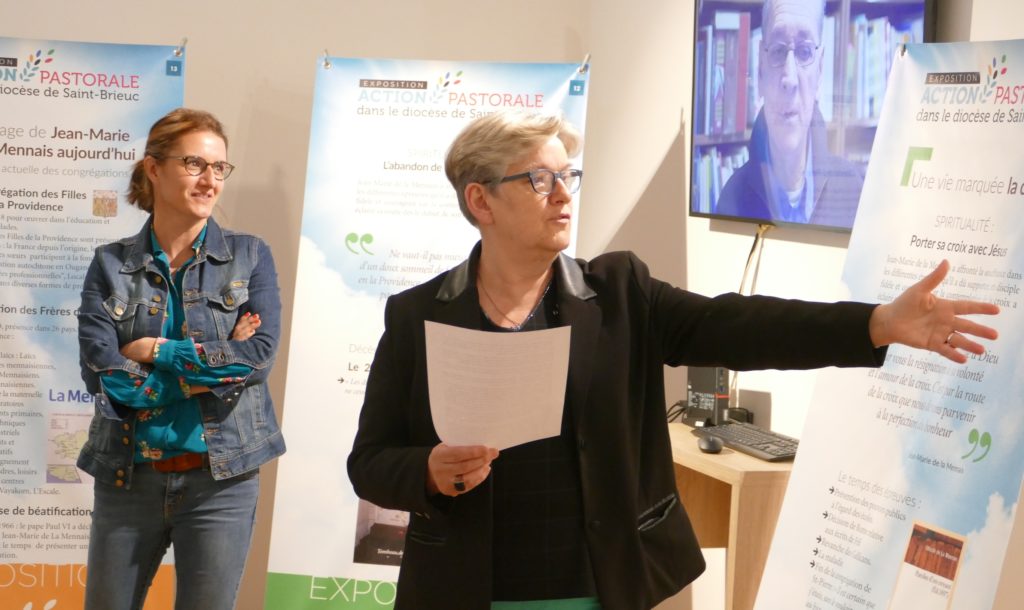 Maud Hamaury – responsible for the Media Library, on the left and Odile Cherdo, person in-charge of the animation of St Yves Diocesan Centre, during the varnishing. 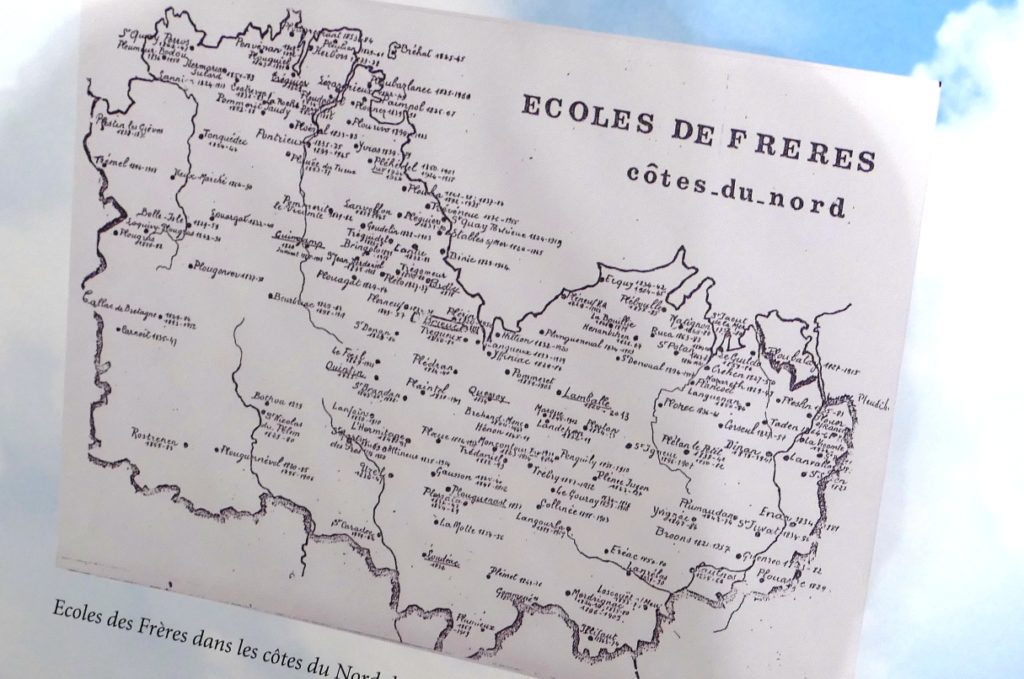 Map of the foundations of schools in the Diocese by the Brothers of Christian Instruction. 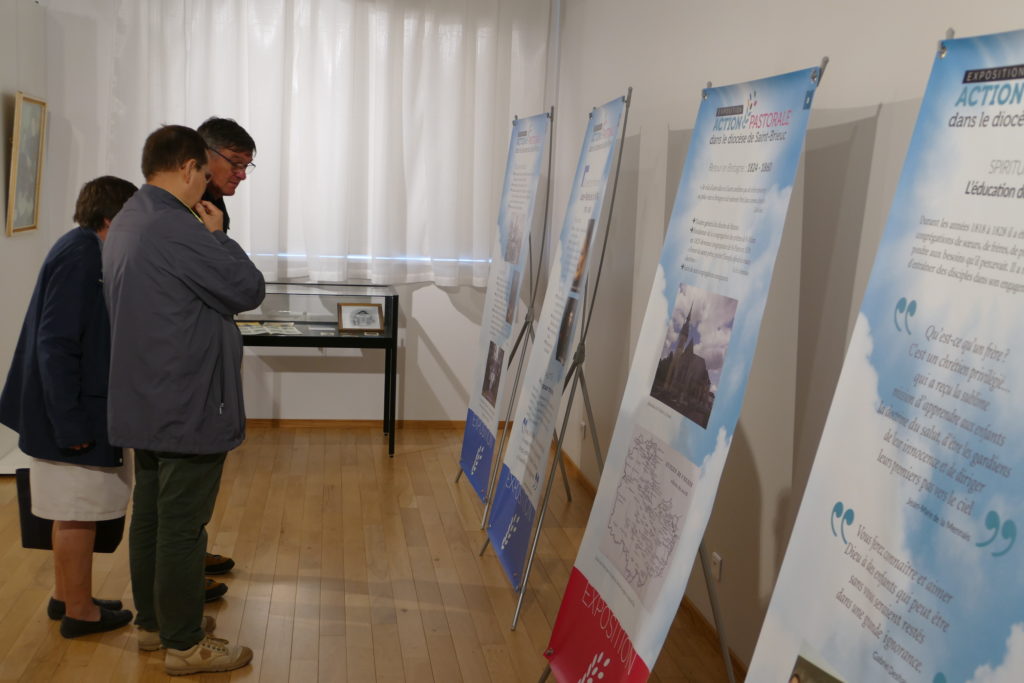 Priest from St Malo, Vicar-general of the Diocese of Saint Brieuc, then Vicar Capitular after Msgr. Caffarelli’s death, Jean-Marie de la Mennais boosted the vitality of the Diocese by retreats, missions, reconciliation of the clergy, education of the youth at a loose end. 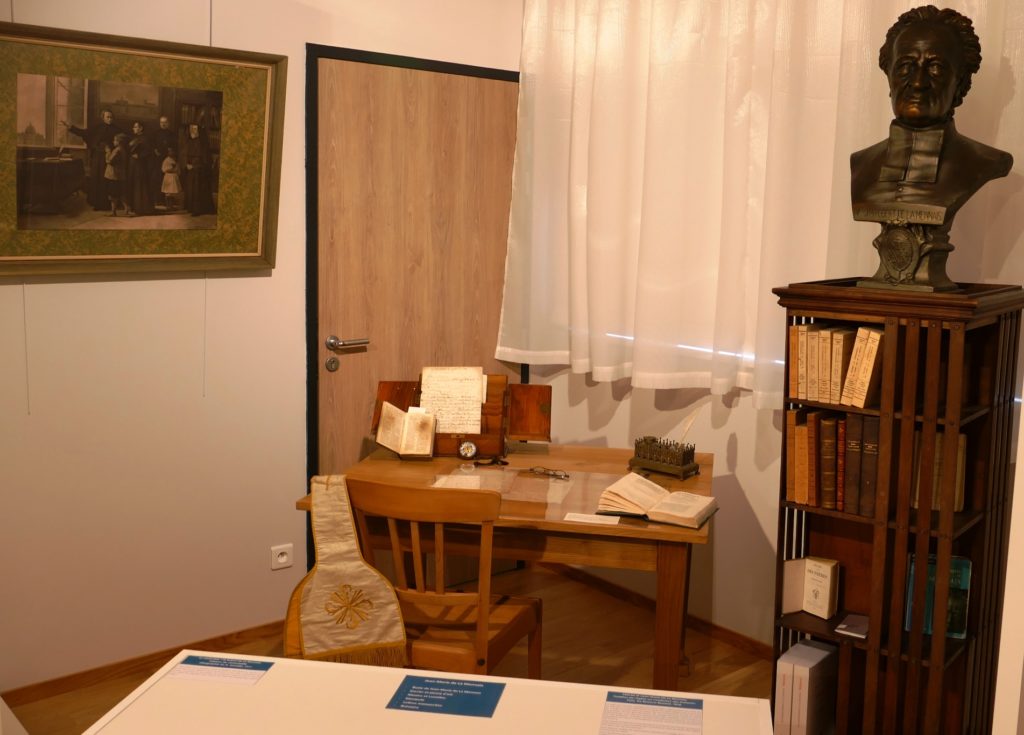 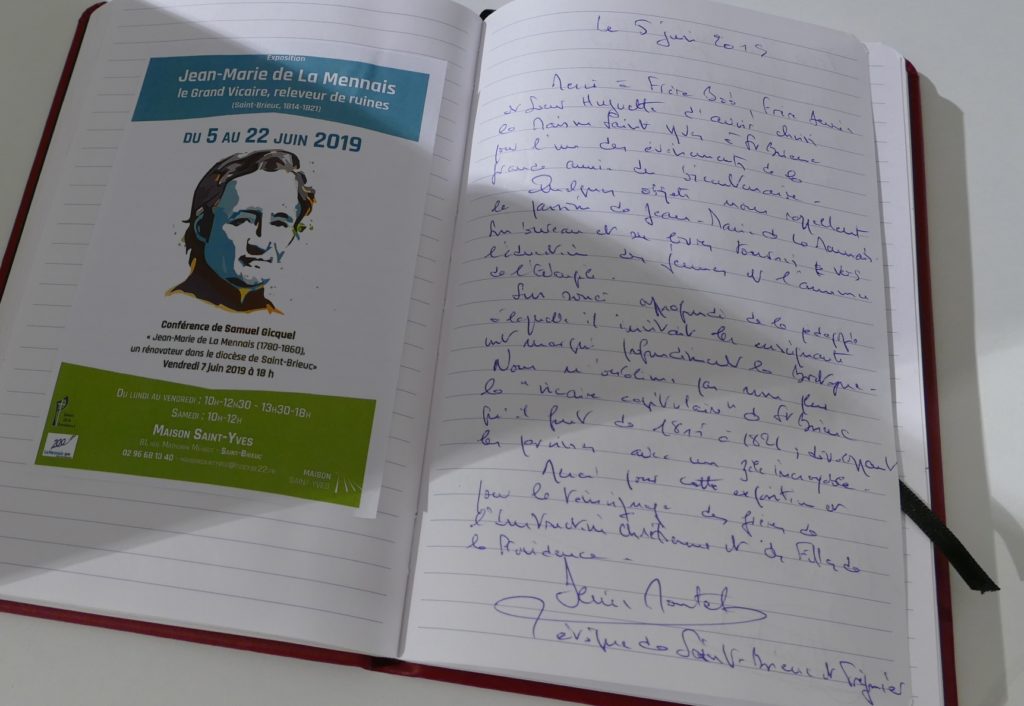 Mgr Moutel’s signature, bishop of St Brieuc et Tréguier on the guest book of the exhibition. 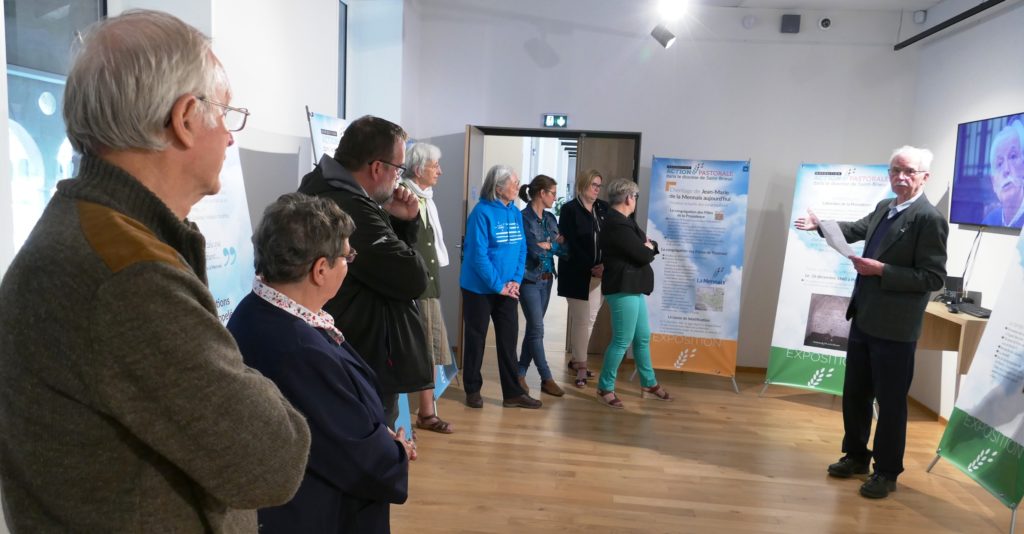 Present on all fronts, he contributed to giving priests faith in their mission and to the faithful, the desire to return to religious practice.

Practically. This exhibition is presented at St-Yves Diocesan Centre, 81 Mathurin Méheut Street at Saint Brieuc from 6th  to 22nd June from 09am to 18 pm.

It will then be intended to circulate in various parishes and schools of the Diocese of Saint Brieuc and Tréguier where the presence of Father de La Mennais was important. 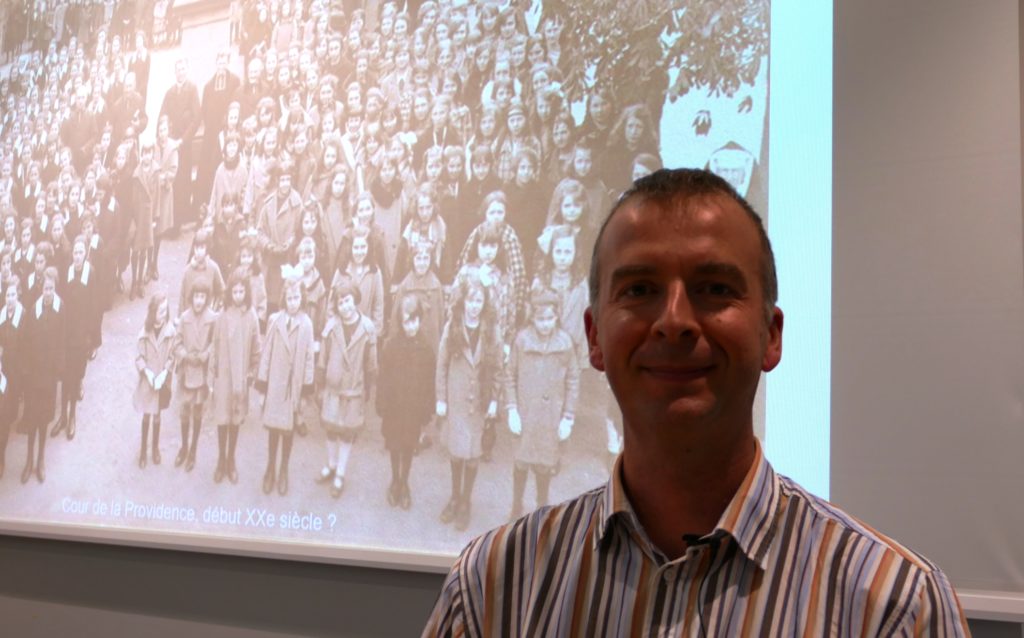 Samuel Gicquel, a senior lecturer at Rennes 2 stressed during an intervention on Friday, June 7, in Saint-Brieuc, how much Jean-Marie de la Mennais had deployed an “extraordinary activity” with organising talents. Author of books and articles, with experience in several Breton dioceses, his figure is unique and “his destiny, original for the nineteenth century. ” 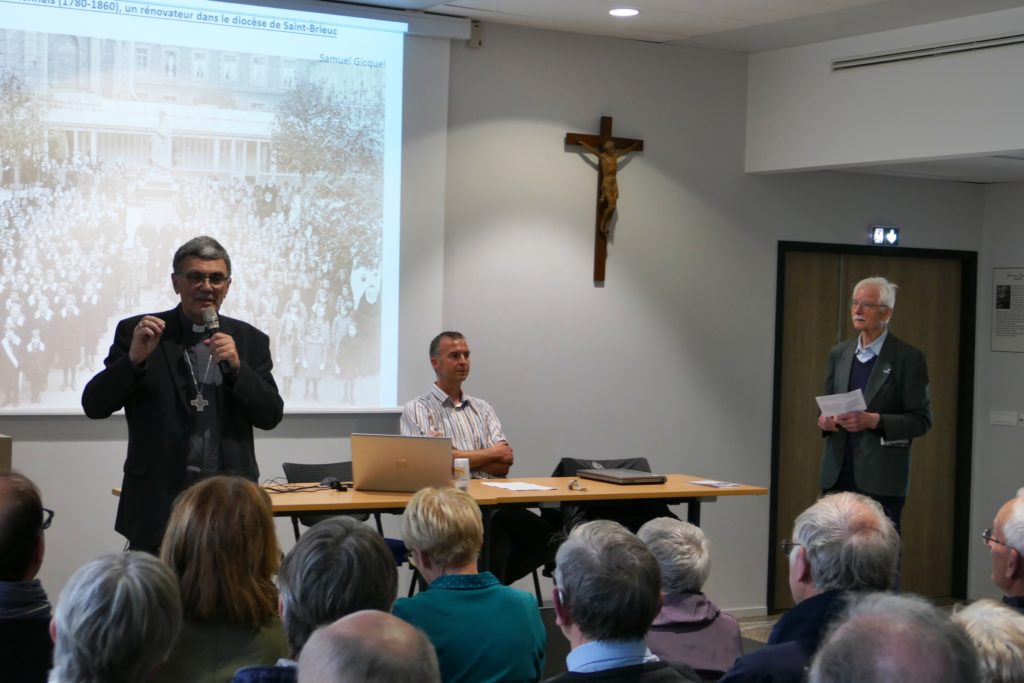 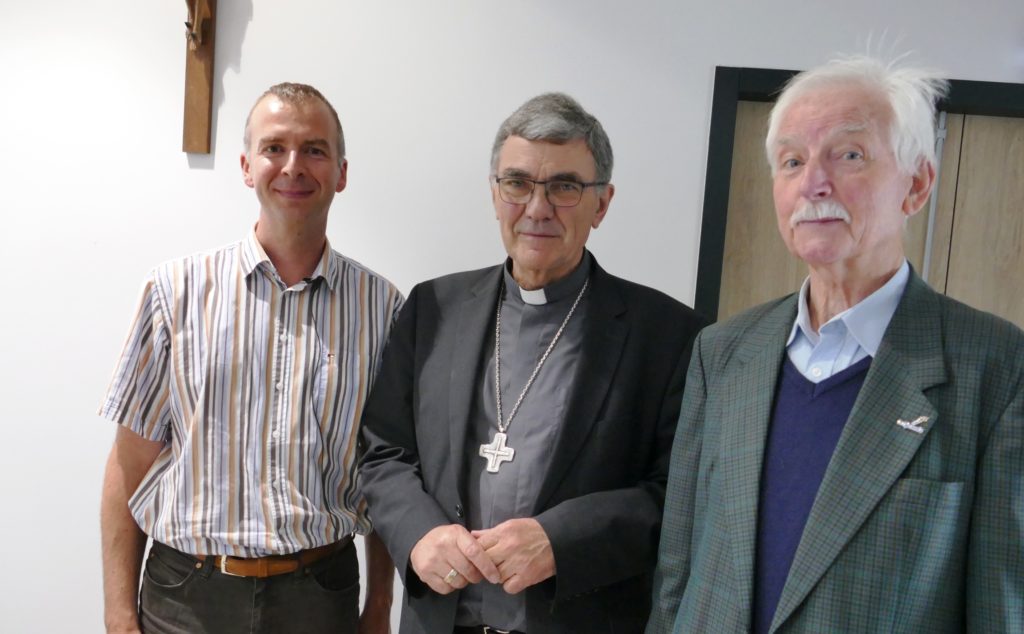 From left to right, Samuel Gicquel, speaker, Msgr Moutel, bishop of Saint-Brieuc and Tréguier and Brother Bob Léaustic, Superior of the Community of the Brothers in Saint-Brieuc. 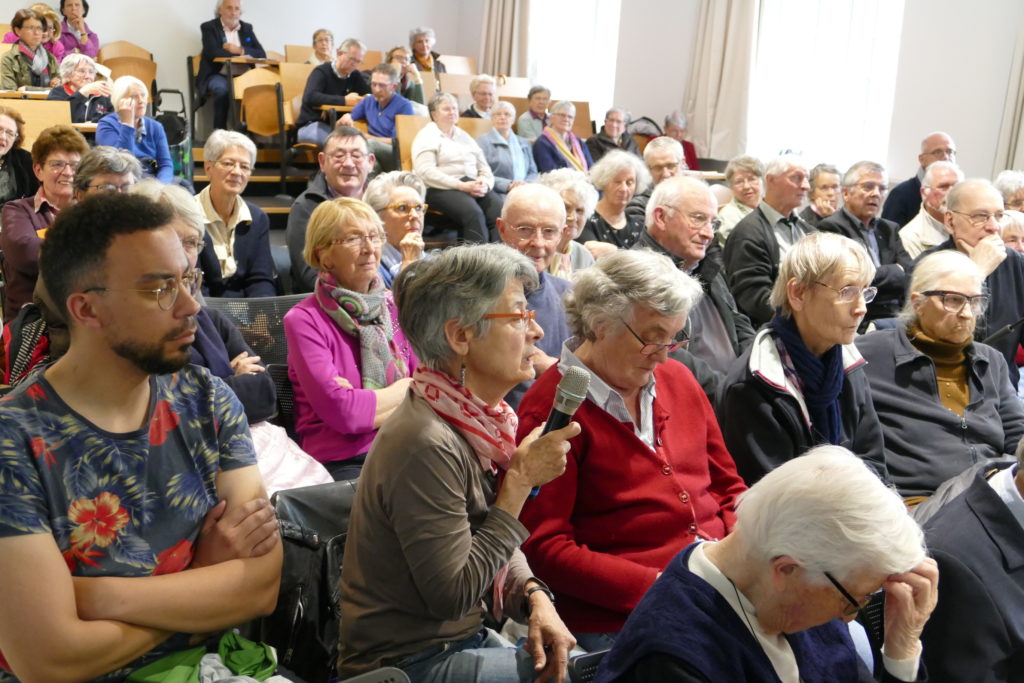 Before a public audience – a hundred participants – at the Media Library of the Diocesan House St Yves, in the presence of Bishop Moutel, Bishop of St Brieuc and Tréguier, the speaker presented various stages of the life of Father de la Mennais in the diocese . He commented on the years when he was Diocesan Administrator from 1814 to 1821, in turn, Secretary of Msgr Cafarelli, Vicar Capitular from 1815 to 1819 and in conflict with Msgr de la Romagère.

Over the years, let us quote his action to open two new small Seminaries in Tréguier and Plouguernével, his concern to improve the level of the faithful and the priests, the action carried out for the restoration of the old Congregations and of course the foundation of the Daughters of Providence and the Brothers of Christian Instruction.

Several aspects emerge from his action: the focus on the choice of men, his sense of the economy to develop projects – he knows how to find resources – his talent as a speaker and his sense of strategy – he opens a school as a priority where there is a mutual school project- and his strong defence of the freedom of education.

Samuel Gicquel spoke of Mennaisian heritage in the Diocese of St Brieuc, after the departure of Father de la Mennais Ploërmel in 1824 to ensure the development of the Congregation of the Brothers. In addition to the follow-up of the two Congregations – the Sisters and the Brothers – the creation of schools has continued in an active way, the diocesan clergy has been involved much more strongly than elsewhere in Brittany in supporting the Pope – according to the wishes of Father de la Mennais- and the arrival of Bishop Le Mée as Bishop-he was in a way the “spiritual son” of J-M de la Mennais. 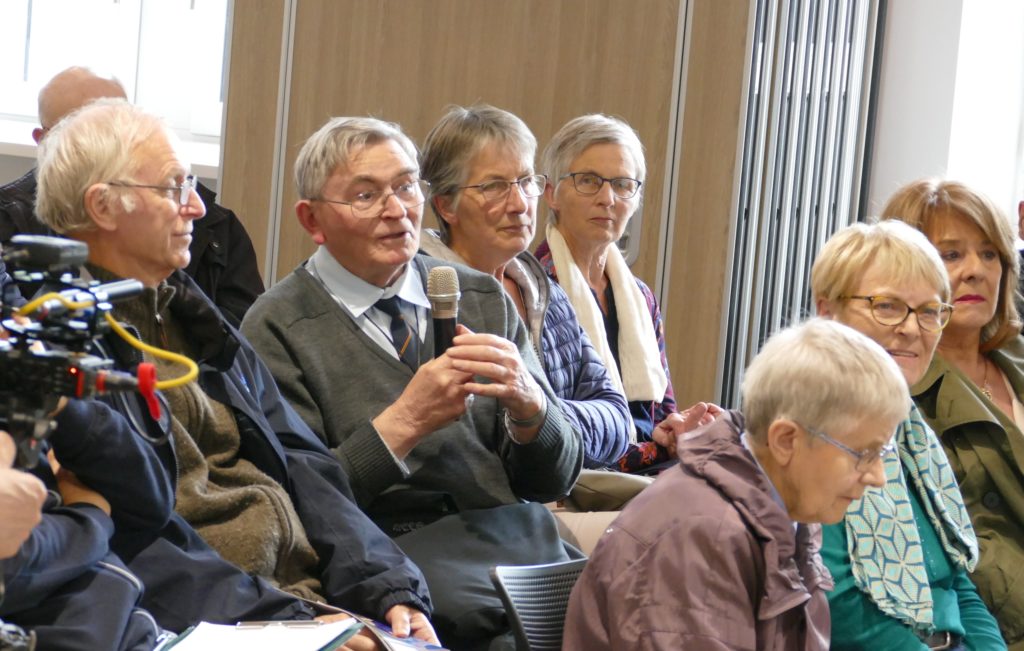 One of the many interventions. Here, that of Brother Louis Balanant, responsible for the Library and Archives of the Mother House of Ploërmel.

During the discussions with the audience, several speakers also underlined other accents of Jean-Marie de la Mennais, particularly that related to the spiritual life with the organisation of Retreats. 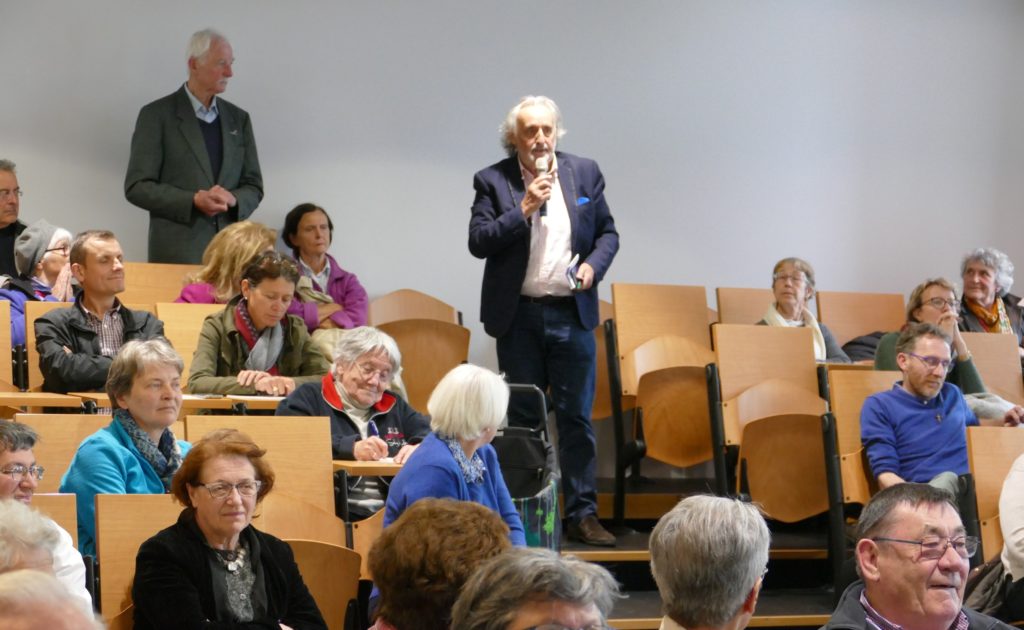 Christian Daniel, deputy in charge of culture in Saint Brieuc pointed out that the La Mennais Space  old Chapel of the Sisters of Providence – will be used for projects meant for young people

Present at the conference, Mr.Christian Daniel, Deputy Mayor in charge of culture commented on the decision of the Municipality to see the La Mennais Space, property of the city – and former chapel of the Mother House of the Daughters of Providence – to be used as a significant “third place” in the heart of the city for projects with young people.