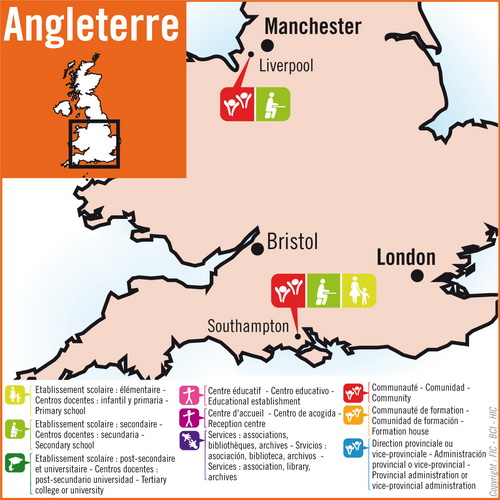 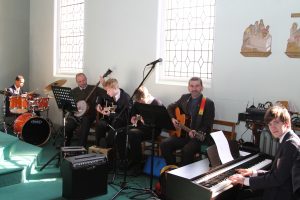 In 1903, some French Brothers, expelled because of secularisation laws, found refuge in England. The Fullands estate, rented at Taunton, in Somerset, welcomed the first French postulants in 1904.

The Taunton residence being too small, the congregation purchased a large estate at Bitterne, near Southampton, in 1910. The French Noviciate was there till 1922. Then, the Jesuit Fathers sold us the Highlands College, in Jersey. For a period of 50 years, from 1922 to 1972, except during the war, the French aspirants had their Noviciate there.
Jersey
In 1896, to answer the call of the parish priest, the FIC’s replace the La Salle Brothers in the St.Thomas parish, and open two or three other establishments.
In 1904, Brother Abel and the members of his Council rent a residence for the General Administration of the Congregation. The administrative office is transferred to Highlands in 1922, and then to Rome in 1972. The Highlands estate was then sold to the State of Jersey. 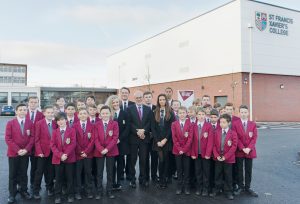 The departure of the Novices from Bitterne in 1922 indicates truly the beginning of the English Province. St.Mary’s College in Southampton, on the property of Bitterne, was opened on this occasion. Thanks to the contribution of the Juniorates of Pell Wall (1937) and Cheswardine (1950), the English took gradually over from the French and Canadian Brothers.
Today, the English Brothers are in-charge of two Secondary Schools:
– St. Mary’s College, in Southampton, to which is attached a primary school, named “Charlton House”,
– St.Francis Xavier’s College, in Liverpool,
a former College of the Jesuit Fathers, sold to the Brothers in 1974. The successes in sports (many national cups) or in extracurricular activities (the choir of the College appears throughout Europe) go hand in hand with the academic success.