” Let us form a community of faith, love and sharing “

“We are educators of fraternity “,

“Today as yesterday, let us go on hoping “.

They are three extracts of 7 titles of the CD whose title is “New paths of fraternity ” made by Bro Simon Gueye, who lives in Lomé in Togo. 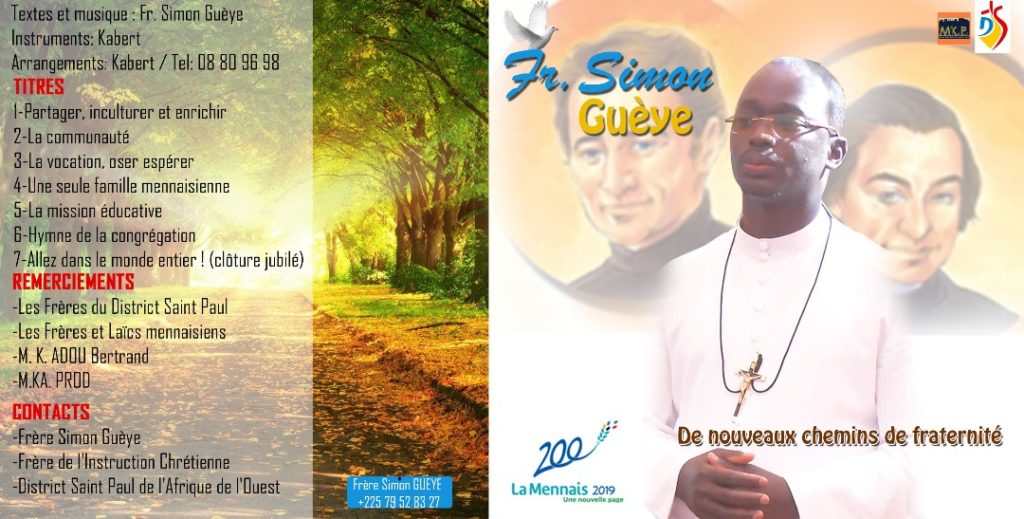 “The General Chapter of 2018 was very specific, explains Bro Simon Gueye in the context of the Bicentenary, a new page to writte, a first Superior general from Haiti, and the emphasis on new paths of fraternity.

Having received this document just two days before the beginning of my annual retreat, I decided to make it a companion during my time of reflection and meditation.

Great was my surprise for the wealth it contained. I found there not only the daily bread but also subjects of reflection for the challenges that are waiting for us all.

I had to answer a single question: what could be my contribution to this chapter out of the union of prayer and the real-life experience of the given orientations? A single word occurred to me: brotherhood. Drawing from the qualities received from God by grace and trusting his inspiration, I said to myself that I could make an album of songs based on the orientations. “

Fraternity lived in the General Chapter 2018

This Album consists of seven titles with texts directly inspired by the acts of the Chapter 2018 and by the Rule of Life. It is added to the resources and animations for the celebrations of the Bicentenary.

“May God grant us through these songs the grace of profound conversion for a brotherhood lived according to the heart of God. “

Practically speaking. The CD “New paths of brotherhood ” will be available at the beginning of June at Ploërmel, at the Mother House, at the Generalate in Romr and at Lomé, in Togo. Cost: 5 euros